20 years ago, what is now Theatre Bizarre got kicked out of the Russell Industrial Center — today, it’s Detroit’s biggest freak show 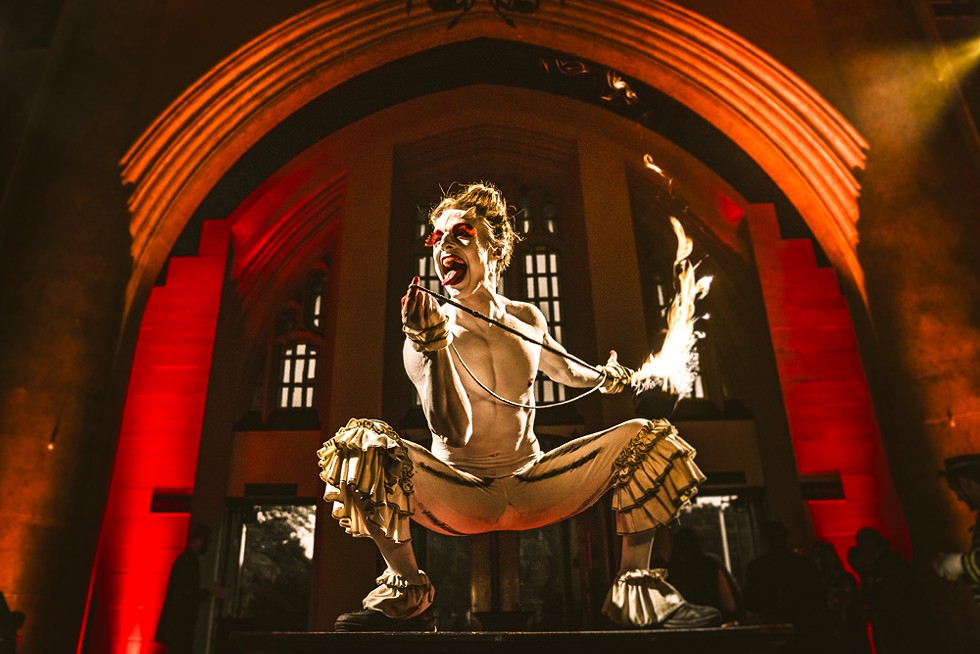 John Dunivant has been told he's crazy, that his crew is crazy — maybe not explicitly by any of the attendees of his annual Halloween party, but by his respective peers in the immersive theater community, from folks who pull off elaborate feats in entertainment from the scenes over in New York, Las Vegas, and San Francisco.

There's no other way of saying it, though — nothing in those cities compares to the scope of Detroit's annual all-out Halloween extravaganza of Theatre Bizarre.

Dunivant is a visual artist, but in his words, he's a "painter ... and sometimes sculptor." And even though he and his team have built stages, carnival rides, and countless ephemeral set pieces, he would stop you from calling him a carpenter. Because everything you see upon entry to the Masonic Temple this month, no matter which of the eight floors you explore, wasn't fabricated by hot-shit high-end specialists; rather, it was all built by Dunivant's murder of rustbelt crows crafitly creating things on the fly, and figuring out the necessary tools and machinations needed to make every peripheral piece fall into place.

When we catch up with Dunivant, the de-facto ringleader of this macabre carnival, he's almost too tired to talk. It's early afternoon on a weekday in late September and things have already been in high gear since midsummer; production technically started as early as January.

‘It was designed to look like it was falling apart. No, we built that three weeks ago!’

"It's getting tougher every year, but I can say that the thing that's definitely kept me going the last couple years is the crew," Dunivant says. "But also, there are so many stories from members of the crew who have told me that have brought me to tears, how this event has changed their lives."

That people have verbalized their highest regards to Dunivant, he says, is heartening, but also adds to the weight — the pressure to keep it going.

If you're already a devotee of this long-running epic alternate reality of a Halloween party, we'd suggest trying something different this year. Instead of maximally embodying the frivolity of the freakdom, take a few seconds to ponder the hours of exertion and care it took to conceive the specific furnishings and ambience of each room you enter. Sure, that might take you out of the moment, but it might also top-off the local pride you'd already held for this hometown cultural conjuration.

One particular achievement of note this year, Dunivant says, is the expansion of one of Theatre Bizarre's hidden rooms — the "Human Absinthe Dispensary Speakeasy," where two live performance artists will carefully offer orifices in their heads as conduits for tubes to decant the potent green liquid. Entrants of this room will have to perform a ceremony in order to fill their cups from their human dispensers, but that's not all — the movements of your ceremony will be live-scored by two other artists performing on theremin and violin. That's one among many moments happening in nooks and crannies brimming with immersive entertainment in the sprawling Masonic Temple, including a burlesque show at the Dirty Devil's Peep Show, dominatrixes at the Fistitorium, and the main hall, where bands like Messer Chups, Mother Feather, and Detroit's own punk-rock pioneers Death will perform on both of the scheduled Saturday evening events.

There's a worldwide community of artists similar to Dunivant who produce similarly "immersive" events where attendees explore and interact with a piece of performance theater, and even national conventions where these creators swap ideas and achievements. Dunivant has, rightfully, earned a reputation as a leader in the scene.

"Theatre Bizarre, actually, is now considered a bit of a 'grandfather' part for this new form of entertainment, and we were doing it completely wholly separate from all of that," Dunivant says. "We had no idea there was any sort of 'movement' going on."

Dunivant has artistic pursuits beyond Theatre Bizarre; he was honored as a Kresge Fellow in 2011 for his paintings. Much of the visual art he's created adjacent to Theatre Bizarre's universe has a sort of surreal austerity, a dreamlike and primal gothic vibe. You might say his work has a stylish ghastliness to it, like if Edward Gorey listened to heavy metal.

All his life, Dunivant says, he's loved the world-building aspects of science fiction and fantasy, along with an appreciation of mythology, and the shadowy and angular art of early German Expressionist silent horror films. (His love of Star Wars is evident in a recent dazzling work that reimagines Peter Paul Rubens' 1605 painting of "Saint George and the Dragon" as a saintly and triumphant Luke Skywalker slaying a Wampa astride a tauntaun.)

And Theatre Bizarre has its own backstory and characters. "It was meant to feel as real as possible," Dunivant says.

What we now know as Theatre Bizarre started in the mid-'90s at Dunivant's former studio space in the Russell Industrial Center, reaching its zenith in 1999, when Dunivant built a cabin inside of his studio space, thickly blanketing the floor with crinkled, dirt-kissed leaves and transplanting hundreds of trees that framed winding trails throughout the cavernous room inside the former auto parts factory. This indoor-haunted-forest soiree brought Dunivant to the brink of being banned from the Russell; Dunivant's Wikipedia page will tell you he was ejected at this time, but in truth, he retained creative space there until 2004. But after 1999, the party moved to a property just next to the old State Fairgrounds for the following year's inaugural Theatre Bizarre event in 2000.

The early incarnations were all-night parties arranged as nocturnal carnivals with wooden wrought-looking structures that seemed drawn straight out of one's wildest nightmares (like a working "Ghost Train"), centering on a stage resembling a freaky big-top circus act with flamethrowers and primeval torchlight for ambience. The party was outdoors, with revelers traipsing around an expansive backyard of an actual domicile owned by the event's cofounder, Ken Poirier, where they passed iconic-looking banners for "The Spook Show" and were given scant and gruesome details about the lore of Theatre Bizarre's fictitious patron saint, "Zombo the Clown." (You can catch him wandering the floor at the Masonic Temple, where he will pose for selfies.)

But once again, Dunivant was pushing the envelope. The City of Detroit shut the party down in 2010 for, above all else, code violations. Dunivant's dedication to craftsmanship made the set look perhaps worse to city officials than it really was. "It was designed to look like it was falling apart," Dunivant recalls saying during one exchange with a city official who thought one of the structures must have been at least 20 years old judging by its condition. "No," Dunivant said, "we built that three weeks ago!"

After the event was abruptly shut down, the Theatre Bizarre family scrambled — with 18 hours' notice, and no sleep — to relocate the event to the Fillmore in 2010. But the event needed room to grow, to continue building onto its alternate world, which is how it wound up moving into the much larger labyrinth of the Masonic Temple in 2011. This weekend marks its ninth year at this historic location, with two sold-out Gala Nights requiring formal attire and masquerade disguises for this Friday Oct. 11 and Friday Oct. 18. The public is welcome to wider, general-admission events on Saturday Oct. 12 and again on Oct. 19.

For Dunivant, it's all about "exploration."

"I want to create challenges," he says. "It's a different type of reward. People tell me that they didn't [have time to] make it to one certain room, or to something else, but if you find everything the first time, that would be boring! That's why there's no map of the building, there are no specific set times on the program. You're going to miss a lot no matter what, anyway, so be accepting of that and dive in and try to figure it out. If you have a map, you can't plan for discovery. I want you to be in uncharted territory and to have to seek these things out."

Dunivant says he's always had a fascination with artificial environments — "from theme parks to terrible roadside attractions made of chicken wire and papier mache and blacklight paint."

"My first house party, I went all out building a graveyard with cast concrete, sandblasted tombstones that weighed 400 pounds," he says. "It was about pure escapism." Dunivant says a lot of his inspiration comes from dioramas in natural history museum exhibits.

"It's all very somewhat toylike, in terms of wanting to have everything [in Theatre Bizarre] loom or lurch," Dunivant says. "It was meant to be a to-scale diorama that you've entered, so everything looms to create this childlike perspective, kind of like giving yourself over to the helpless feeling that this world is literally around you." (In fact, the old State Fairgrounds-era Theatre Bizarre has been immortalized as a miniature diorama, which will be on display during the Masonic Temple Theatre Bizarre for old fans to reminisce over.)

For the event, the devil is truly in the details. Consider "the thousands of light bulbs we're changing, in every chandelier and every bathroom!" Dunivant says of the warm lighting, which gives the event an eerie glow. "As a painter, I look at those light bulbs as the glazing, the final oil glaze applied so that it brings that melding of all the colors so that you see the rich consistency," he says. "I've heard it described as being like entering a waking dream. It's more than painting at that point, more than a sculpture. You're meant to enter the art and live it and become a part of it."

Does it feel too real? It's supposed to. Just remember, when you enter the Masonic Temple wearing your costume, that the crew of hundreds, including Dunivant, poured their whole souls into Theatre Bizarre. It's a monstrous miracle.

"I'm not an 'event coordinator' or 'party promoter,'" Dunivant says. "That's never been my desire. I'm too much of an introvert. It was always about creating a massive work of art that's greater than the sum of its parts."