Makers like Glorious Cannabis say the carts are more expensive to manufacture, but don’t use chemicals and have a smoother finish 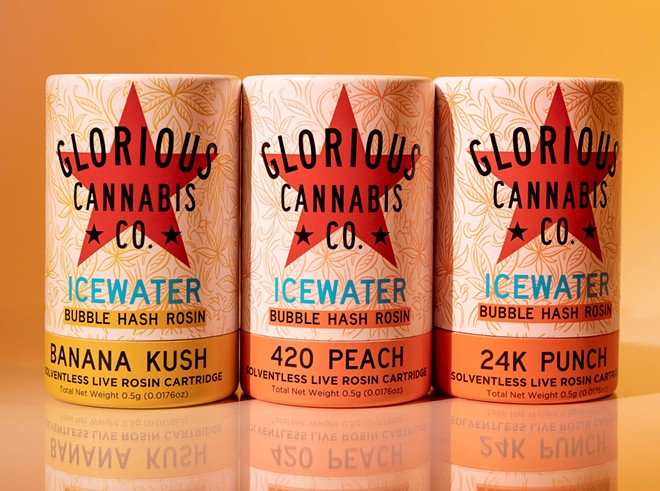 That’s the idea behind a wave of new products hitting the cannabis space in recent months.

Rochester Hills-based Glorious Cannabis recently launched a line of solventless “rosin” cartridges made without any added chemicals, as opposed to “resin,” the golden goo typically used inside of vape carts. Pete Truby, the vice president of marketing at Glorious Cannabis, says while making its Icewater Bubble Hash Rosin products is a labor-intensive process, he believes cannabis consumers could be interested in a higher-quality product.

He notes the Glorious Cannabis slogan: “We cut buds, not corners.”

“Distillate carts are just so readily available and cheap. It’s really hard to compete,” he says of typical carts, which are made using chemicals like butane. “We think maybe we can get people to try something that’s smoother and a little bit higher quality than a distillate.”

Truby says the line is inspired by the company’s popular Icewater Bubble Hash-infused pre-rolls, which refers to a type of hash that bubbles when smoked, and is made using only ice and water — no chemical solvents like butane.

“We don’t use any trim or shake, we use full flower,” Truby says. “And then we infuse it with bubble hash, not distillate, which is a sort of cleaner ingredient, if you will, since it only takes ice and water to make. There’s no ethanol or any butane or any harsh chemicals to produce the concentrate, and it really does result in a cleaner, smoother product.”

Bubble hash is made using a process that involves freezing fresh cannabis flower, which is then added to a large tub filled with ice and water, and agitated. The resin then freezes and breaks off from the flower, and is sifted out. This results in what Truby describes as a “dusty-type of textured concentrate,” which is rich in THC and terpenes.

For the Icewater bubble hash-infused pre-rolls, this is added to the flower and rolled into joints. To produce the carts, an added step is needed: the bubble hash product is pressurized and turned into a liquid “rosin” that can be put into a vape cart, heated in a battery, and smoked.

“Our way is harder, but we’re not just doing it because it’s harder and cleaner, although I do love that it is cleaner,” Truby says. “Despite the high THC, it’s super smooth and you’re not going to cough. It doesn’t really give you that sort of burning feeling in your chest. It’s just super smooth. So there is a method to the madness of why we would do it the hard way. We really do think it’s a better product in the end.”

We sampled Glorious Cannabis 24K Punch live rosin cartridge, and did notice less of a lingering sensation in our lungs and a fuller high.

Other Michigan cannabis companies have also gotten into the rosin game, including Pleasantrees and Michigrown.

“It is a small kind of niche market right now,” Truby says. “Hopefully it grows.”

He adds, “We can’t make these cheap, so there’s not too many people that are doing it. We’re doing it because we’re proud that we have this pre-roll that people know and hopefully we can kind of piggyback off that to get people to try something that isn’t distillate.”

The carts are also available in other Glorious Cannabis strains like 420 Peach and Banana Kush.

At our local dispensary, rosin carts were selling for about $55, or $10 more than typical resin carts.

In 2019, the industry was rattled by a rash of vaping-related injuries linked to a chemical called vitamin E acetate that was found to be used to cut black-market cannabis vape carts — hence part of the appeal of “clean” chemical-free weed for many customers.

The idea has been compared to choosing organic fruits or vegetables to eat, though it remains to be seen if these products are in fact safer to use than typical vapes.

Truby says he hopes the rosin will resonate with consumers who want to avoid the “race to the bottom” driven by plunging cannabis prices.

“We’re really trying to take the long view of cannabis and not the short view, which is important because if you know anything about the cannabis industry, it has its ups and downs, the prices go wildly swinging,” he says. “So we’re really just trying to do things the right way, and be one of those companies that hopefully is around 20, 30, 40 years.”