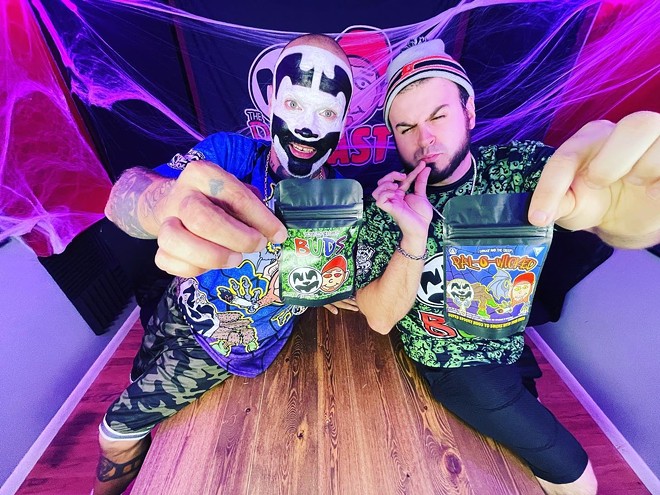 Insane Clown Posse's Shaggy 2 Dope is the latest musical artist to get in on the cannabis game, following the likes of Tee Grizzley and GRiZ.

The rapper has teamed up with his podcast co-host Kegan the Creep on a line of cannabis products. The pair have joined forces with Lemonati Family Farms to release "Pal-O-Wicked," a limited-edition strain named after ICP's annual Hallowicked festival.

In other Juggalo news, a documentary about ICP's "Million Juggalo March" on Washington, D.C., to protest the FBI designating their fans as a "hybrid gang," will premiere next week. The film, titled The United States of Insanity, is directed by Tom Putnam and Brenna Sanchez, the award-winning filmmakers behind the hit documentary Burn.

The film is set to screen in theaters nationwide on Tuesday, Oct. 26, including Emagine Royal Oak, the Emagine Palladium in Birmingham, and AMC John R 15 in Madison Heights. More information, including all participating theaters, is available at Fathom Events.

"Our goal is to put the audience through our own paces of discovery during the seven years we filmed with ICP, their fans, their lawyers, and the government agencies pursuing them," Putnam said in a statement. "ICP's extensive archive of music videos, home movies, documentaries, and feature films are layered throughout our movie as well, helping us paint a unique story of two high school dropouts achieved their own American dream while bringing people along for the ride during the seven years we’ve been filming ICP and their fans as they fight for their lives against the FBI."

You can watch the trailer below.