Lansing police say they are investigating 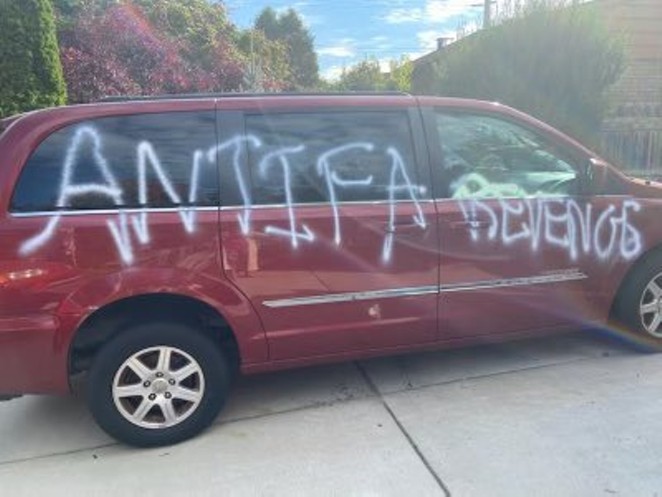 According to Republican candidate for governor Tudor Dixon, the property of a retired Lansing couple who supports former President Donald Trump was vandalized by “Antifa,” which allegedly scrawled messages like “TRUMP NAZI SCUM,” “GOP TERRORIST,” and “ANTIFA REVENGE” on their vehicles and driveway in red and white spray paint.

“A retired couple in Lansing had their cars and property vandalized by the tolerant people of ANTIFA because the couple supports President Trump,” Dixon wrote on Twitter. “Another example of the radical left’s ‘fight like hell’ tactics, courtesy of Gretchen Whitmer.”

Dixon provided no source for her claims. According to a story from WLNS-TV published after Dixon’s post, Lansing police are investigating the incident, which allegedly occurred between Wednesday night and Thursday morning on the 2800 block of Lasalle Gardens on Lansing’s east side. Another story published after Dixon’s post by WXMI-TV Fox 17 identifies the couple as Sophia and Edgar Russell.

A retired couple in Lansing had their cars and property vandalized by the tolerant people of ANTIFA because the couple supports President Trump.

Another example of the radical left’s “fight like hell” tactics, courtesy of Gretchen Whitmer. pic.twitter.com/z23H44WBbN

Anyone with information is invited to contact Lansing police at 517-483-4600.

“Antifa” refers to “Anti-fascists,” a loose, decentralized political movement often cited as a bogeyman by the right. It is not clear what Whitmer has to do with this vandalism, assuming it’s real, other than saying that Democrats need to “fight like hell.”

Of course, it was Trump himself who told his followers, “If you don’t fight like hell, you’re not going to have a country anymore” before they vandalized the U.S. Capitol on Jan. 6, 2021.

Before Dixon ran for governor, she was known as a host on the right-wing outlet Real America’s Voices, where Dixon suggested without evidence that Antifa was behind the Jan. 6 attack. She has also downplayed the incident, claiming “I don’t believe that we had an insurrection.”

Metro Times reached out to the Dixon campaign for comment.

“Tudor condemns all violence, including the events at the Capitol that day, as well as the riots and destruction that took place that summer,” the campaign communications director Sara Broadwater responded. “Unlike Gretchen Whitmer, who still has not condemned this vandalism or the recent shooting of the 84-year-old Right to Life volunteer.”

The Dixon campaign is referring to the civil unrest that followed the murder of George Floyd by Minneapolis police, as well as a recent incident in which an anti-abortion Right to Life volunteer was shot while canvassing in Odessa Township. The man who pulled the trigger claimed it was an accident.

In September, Dixon joked about a plot to kill Whitmer that was thwarted by the FBI in 2020. “For someone so worried about being kidnapped, Gretchen Whitmer sure is good at taking business hostage and holding it for ransom,” Dixon said at a campaign event in Troy.

“Threats of violence — whether to Governor Whitmer or to candidate and elected officials on the other side of the aisle — are no laughing matter, and the fact that Tudor Dixon think it’s a joke shows that she is absolutely unfit to serve in public office,” Whitmer communications director Maeve Coyle said in a statement.

This story was updated with a statement from the Dixon campaign.

Leyland "Lee" DeVito grew up in the suburbs of Detroit, where he read Metro Times religiously due to teenaged-induced boredom. He became a contributing writer for Metro Times in 2009, and Editor in Chief in 2016. In addition to writing, he also supplies occasional illustrations. His writing has been published...
Read More about Lee DeVito
Scroll to read more Politics & Elections articles