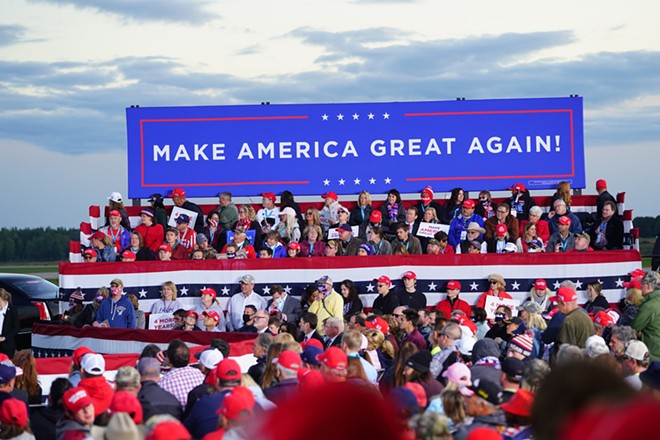 The Michigan Democratic Party lambasted President Donald Trump for hosting “superspreader events” in Michigan and across the country at a time when the state is confirming more than 1,000 new coronavirus cases a day.

Trump plans to hold a campaign rally in Muskegon on Saturday, just 17 days before the Nov. 3 election. Thousands of fans typically show up to his campaign rallies without masks or social distancing.

“Trump has shown nothing but a reckless disregard for the lives of Michiganders as he and his campaign host superspreader events throughout our state,” Michigan Democratic Party spokesman Christian Slater said in a statement. “For months, Donald Trump lied about a deadly pandemic. Then he refused to take action as it caused crisis after crisis and he attacked leaders like Governor Gretchen Whitmer who are fighting to keep Michigan safe. Now, almost 7,000 Michiganders are dead, over 130,000 have been sickened, unemployment has skyrocketed, and small businesses have been forced to close while he continues his relentless assault on protections for the 4.1 million Michiganders with preexisting conditions.”

“Just today, over 1,000 Michiganders tested positive for coronavirus,” Slater said Tuesday. “Despite the pain and suffering he has forced on Michigan families, Donald Trump still refuses to address the deadly pandemic he has failed to contain and we will vote in droves by mail, early in person and on November 3 to elect Joe Biden as his replacement and send Gary Peters back to the U.S. Senate.”

Michigan is an important battleground state that Trump narrowly won in 2016. The latest Detroit News/WDIV-TV survey shows Biden leading Trump 48% to 39%, with 7% undecided.

Health officials have criticized Trump for downplaying the risks of the coronavirus and poking fun at Democratic presidential candidate Joe Biden for often wearing a mask.

On Oct. 2, Trump announced he tested positive for COVID-19. The virus also spread among top advisers and White House staff.

For the first time since his diagnosis, Trump held a rally in Sanford, Fla., on Monday, where there was no social distancing, and most people were not wearing a mask.