More evidence of fake signatures surface in another Michigan race 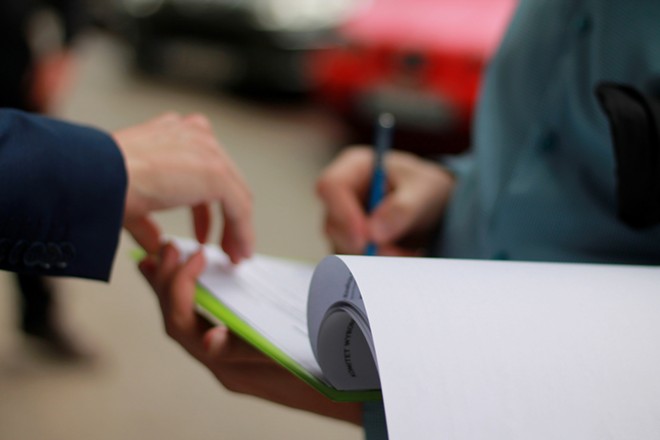 Oakland County Assistant Prosecutor Tricia Dare’s campaign for a seat on the Oakland County Circuit Court used the same eight circulators as Craig to collect about 4,200 signatures to get her name on the ballot.

In a 45-page complaint filed with the Michigan Bureau of Elections on Tuesday, the circulators are accused of working together to submit fake signatures on Dare’s nominating petitions.

Many of the signatures share the same handwriting, and several voters signed affidavits saying their names were forged on the petitions, according to the complaint.

The complaint was submitted by Kay I. Shelton, the wife of Amanda Shelton, an opponent of Dare’s. When she filed the complaint, Shelton tells Metro Times that she was unaware of the allegations against Craig’s circulators.

“I was shocked but also relieved that others were seeing what I was seeing: an orchestrated mass signature fraud scheme,” Shelton says.

The allegations are very similar to those made against Craig’s campaign by attorney Mark Brewer on behalf of the Michigan Democratic Party. Brewer dubbed the circulators “a gang of forgers” who engaged in “round-robining,” a term used to describe a group of people who conspire to sign multiple petitions. 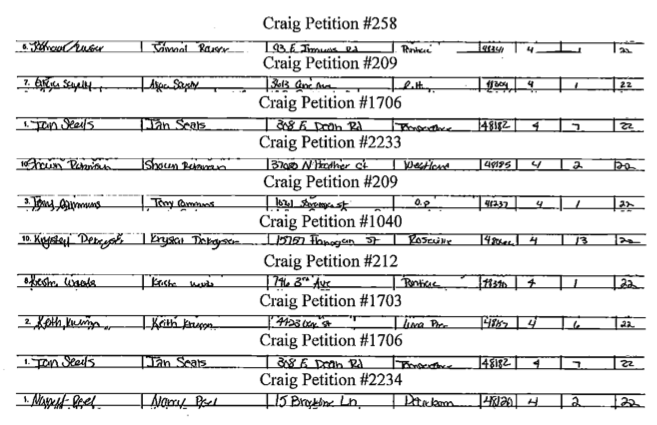 Michigan Bureau of Elections
A sample of similar signatures by one of the petition circulators for James Craig's campaign.

Brewer tells Metro Times that the dual complaints are “independent validation of each other’s allegations of forgery.”

“It was not surprising to me that they were forging signatures on behalf of other campaigns,” Brewer says. “I have been aware of this gang doing this before. I was eager for an opportunity to go after them.”

The Michigan Bureau of Elections is tasked with reviewing petition challenges and signatures. Based on the findings, the bureau drafts a report and makes a recommendation to the Board of State Canvassers, which is responsible for making a determination on the validity of signatures.

Candidates who don’t submit the required number of valid signatures are disqualified from the ballot.

“I hope there will be a complete and thorough investigation of the fraudulent signatures at the state level for all the candidates who used these circulators — not just the governor's race,” Shelton says. “If there was a crime committed here in Oakland County, I hope that the appropriate county law enforcement and prosecutors’ offices will also conduct a thorough investigation and bring charges against anyone who participated in, aided, or abetted any scheme to submit a false signature or petition.”

Free weed: The top Metro Times stories of the week