Election officials are investigating what an attorney calls ‘massive fraud’ 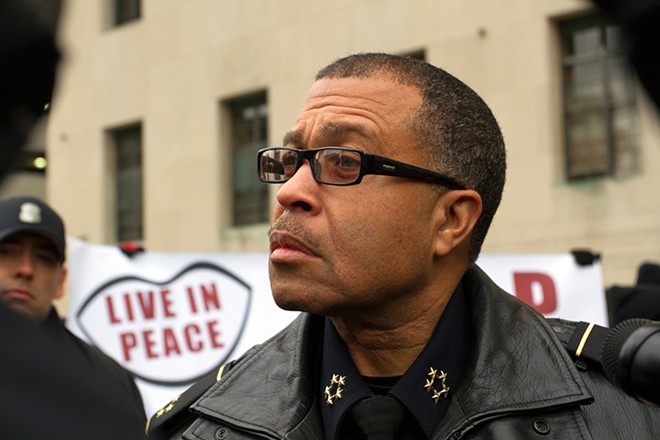 Republican gubernatorial candidate James Craig and his campaign are accused of engaging in “massive fraud” to obtain petition signatures to get his name on the August primary ballot.

The Michigan Democratic Party is challenging the nominating petitions, alleging the campaign forged thousands of signatures.

“I have never seen such evidence of forgery and fraud in a petition drive in the nearly 40 years I have been practicing election law in Michigan,” attorney Mark Brewer, who filed the challenge, said Wednesday. “It’s very clear that Craig did not file 15,000 valid signatures. He and his criminal gang achieved 21,000 only by massive forgery.”

“After our review of Craig’s petitions, we concluded that the combination of incompetence, invalidity, unregistered voters and apparent fraud means that there is a strong probability that Craig submitted insufficient signatures to qualify as a Republican candidate for governor,” Fred Wszolek, spokesman for Michigan Strong PAC, said in a news release.

Craig’s campaign attempted to submit an additional 4,200 signatures last week but missed the deadline by about 10 minutes.

The Michigan Democratic Party also challenged the nominating petitions for Dixon, a former host of a conservative TV show, and businessman Perry Johnson. They also are accused of fraud and forgery.

Democrats say all of Dixon’s signatures should be rejected because the petitions incorrectly listed 2026 for the expiration date of the gubernatorial term on her petitions, instead of the accurate date of Jan. 1, 2027.

There is a precedent for disqualifying a candidate for failing to properly fill out nominating petitions. In 2018, state election officials removed U.S. House candidate Matt Morgan, a Democrat, from the ballot for listing a P.O. Box, instead of a street address, on his petitions.

“Those are mandatory petition requirements,” Steven Liedel, an attorney with the firm Dykema, said. “All of the other gubernatorial candidates managed to get this correct.”

The three Republican candidates are accused of forging the signatures of dead people and others and adding duplicate signatures as part of an alleged scheme that Democrats call disqualifying and criminal.

“Forgery is a crime,” Liedel said. “It demonstrates to us an apparent pattern of fraudulent activity.”

Democrats are asking the Michigan Bureau of Elections and the Board of Canvassers to investigate and ultimately disqualify the Republican candidates.

In the complaint against Craig, Brewer alleges that nearly 7,000 of the more than 21,000 signatures from his campaign were forged. Brewer called the petition circulators “a gang of forgers.”

“We have seen significant fraud and forgery in these petitions that were filed by Republican gubernatorial candidates,” Barnes said. “This entire field has demonstrated time and again that they are radical, irresponsible, and will not be held accountable — this pattern, evident yet again, through massive amounts of fraud and forgery."

In a written response, the Michigan Republican Party dismissed the challenges as a shallow, last-ditch effort to remove viable challengers to Gov. Gretchen Whitmer.

“It’s clear the fix is in by Democrats to try and prevent our candidates from qualifying for the ballot against Gretchen Whitmer, and it’s their most desperate move yet to take away choice from working Michiganders struggling to make ends meet thanks to Democrats,” Gustavo Portela, MIGOP spokesman, said. “They will not silence Republican candidates who are going to fight for working Michiganders and ensure they are able to keep more of their hard-earned dollars. We’re fighting to make Michigan a more affordable place to live and it’s clear that goes against what Democrats like Gretchen Whitmer and Joe Biden want. After the dust has settled from this desperate attempt, a Republican Governor will be elected by working Michiganders to bring prosperity and opportunity back to Michigan.”