Raymond Cekauskas Architecture LLC/Smith Group
The proposed A. Paul and Carol C. Schaap Center for the Performing Arts along the Detroit and Grosse Pointe Park border.

A prominent corner of historic Detroit land is in danger of becoming a parking lot as Grosse Pointe Park and a nonprofit ignore city officials’ insistence on preserving the property.

At issue is a vacant lot and building at East Jefferson and Alter near the border of the two cities in what is known as the Jefferson-Chalmers Historic Business Historic District.

The grassy lot with trees used to be occupied by the historic Deck Bar, a building that Grosse Pointe Park owned and demolished in spite of opposition from preservationists and the Detroit Historic District Commission.

In response to the proposed demolition, the city of Detroit created the historic district in 2008 in hopes of erecting another building that complements the history of the area.

A historic district is set up to ensure that a property cannot be significantly altered without approval from the commission. But the Grosse Pointe Park-based Urban Renewal Initiative Foundation (URIF) wants to build a $35 million performing arts hall and adjacent art gallery next to the vacant lot in Grosse Pointe Park.

The plan for the A. Paul and Carol C. Schaap Center for the Performing Arts and the Richard and Jane Manoogian Art gallery calls for paving over the historic lot to make way for 26 parking spaces and demolishing a building that is partially in Detroit and the historic district. The rear of the art center and a loading dock would face Detroit, which some consider a slight to the city.

Although the property is not owned by Detroit, the land is subject to the rules of any historic district in the city: The Detroit Historic District Commission must approve any changes.

Detroit’s top preservationist urged the commission to reject the request, which the nonprofit then withdrew and is operating as if it already has approval. In several Grosse Pointe Park City Council meetings, Mayor Michele Hodges and the council’s attorney repeatedly suggested — falsely — that the city of Detroit already approved the project.

“The Planning Commission of the city of Detroit did approve this project, and it’s checked all those boxes, so it’s proceeding as it should,” Hodges said at a Sept. 19 meeting.

While Detroit signed a tentative agreement called a memorandum of understanding, Mayor Mike Duggan’s office tells Metro Times that the city has not approved the project because the ultimate authority belongs to the Historic District Commission.

“The Historic District Commission does have the authority to approve or reject the parking lot because it is in a local historic district,” mayoral spokesman Dan Austin says. “The mayor’s office respects the independent role of the HDC and the authority of its members to determine based on appropriate criteria whether this project as presented should be approved.”

In a scathing report, Detroit’s Historic Preservation Director Garrick Landsberg criticized the project as “historically inappropriate” and said it “destroys the historic character of the property.”

“The City of Grosse Pointe Park, via the design of this project, appears to have missed a real opportunity to create a gateway facility that respects the historic context, while celebrating and joining both of our cities,” Landsberg wrote. “Instead, the proposed design enshrines in concrete and steel the imbalance often symbolized by this fraught municipal boundary.”

Landsberg recommended that the commission deny the proposal “in its entirety.”

He suggested the best solution for the land is a building that compliments the historic character of the area.

“A surface parking lot at this prominent corner makes permanent the loss of density and characters caused by the controversial and unnecessary demolition of the Deck Bar building,” Landsberg said. “In staff’s opinion, the only appropriate redevelopment of these vacant parcels are public-facing buildings similar in scale, massing and density to what was once there, built to the front lot line with no setback, and consistent with the existing street-engaging historic context of the Jefferson-Chalmers Historic Business District.” 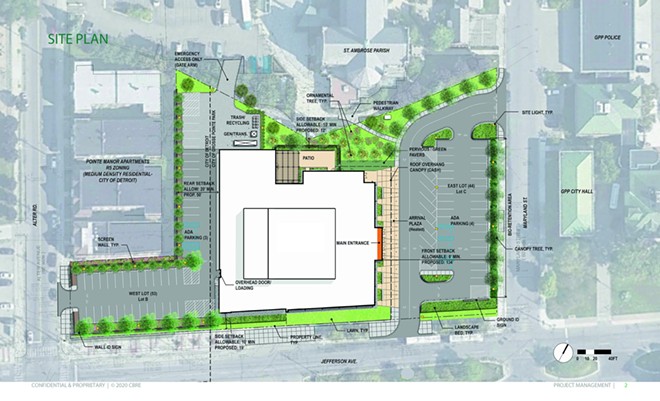 Raymond Cekauskas Architecture LLC/Smith Group
A rendering of the parking lot and A. Paul and Carol C. Schaap Center for the Performing Arts.

Developed largely in the early 1900s, the commercial strip on Jefferson is one of the few remaining early 20th-century neighborhood commercial districts and contains architecturally significant buildings. It has been targeted for revitalization and is the site of the popular Jazz on Jefferson Festival. The district is surrounded by intact neighborhoods and includes more than 50 buildings, including two ballrooms, retail stores, banks, apartment buildings and four churches.

In an interview with Metro Times, Jaime Rae Turnbull, interim executive director for the Schaap Center and adviser to URIF, insisted Detroit had signed off on the parking lot, and the Historic District Commission has no impact on the future of the project.

“It doesn’t play any role in our planning process because of our commitment from the City of Detroit,” Turnbull said.

Duggan’s office disagrees and doesn’t understand why Grosse Pointe Park continues to say it has permission to turn the land into a parking lot.

“As for the confusion, our team is not sure why GPP folks have a different understanding,” Austin says. “I am told the City of Detroit has communicated with them on multiple occasions about this.”

“There’s a question about whether those approvals are even required,” Howlett said. “We do have written approvals from the mayor of Detroit.”


“On a philosophical level, Grosse Pointe Park is Detroit’s neighbor and vice-versa, and how you treat your neighbor says a lot about you.”

The only Grosse Pointe Park council member to raise questions about the project is Vikas Relan, who questioned why his colleagues were green-lighting the project without ensuring Detroit was OK with it.

“I was appalled,” Relan tells Metro Times. “It’s a shame.”

“On a philosophical level, Grosse Pointe Park is Detroit’s neighbor and vice-versa, and how you treat your neighbor says a lot about you,” Donnelly says. “I think a majority of people in Grosse Pointe Park want to have a good relationship with Detroit and are not interested in more walls. Our communities are fundamentally stitched together.”

For decades, Grosse Pointe Park has had a complicated and contentious relationship with the city of Detroit. Until the 1960s, the suburb to the north barred Black residents from living there. Sixty years later, people of color still complain that they are disproportionately pulled over by police and treated suspiciously.

Near the border of the two cities, a developer is bulldozing affordable housing to make way for another parking lot.

In 2014, two blocks from the proposed art center, Grosse Pointe Park began blocking off Kercheval, a main road joining the two cities, by dumping mounds of snow on Kercheval. For the next two years, despite opposition from the city of Detroit, Grosse Pointe Park continued to raise blockades, from piles of snow to a farmer’s market.


At the time, Duggan said, “It’s obvious we can’t trust Grosse Pointe Park leaders. They don’t mean what they say.”

The 424-seat theater would be the long-term home of the Grosse Pointe Theatre and Grosse Pointe Symphony Orchestra. The Richard and Jane Manoogian Art gallery would feature a private art collection with rotating exhibits.

The theater would be named after A. Paul Schaap, a philanthropist, retired Wayne State University chemistry professor, and founder of Lumigen, Inc., as well as his wife, Carol Schaap.

Boosters of the project said they expect it to draw 50,000 guests annually.

The foundation behind the center has struggled to raise enough money to begin construction. Under the original plan, construction was supposed to start in May 2021, with a grand opening in the fall of 2022.

The group has raised $39 million of its $45 million goal to cover capital costs and create a $10 million permanent endowment.

Since then, Grosse Pointe Park has sold property for the project at a deep discount.

“A significant number of residents in Grosse Pointe Park do not see this as a good project for our neighborhood,” Donnelly says. “There has been significant public outcry about this not being the development we want to see, but they aren’t listening to us.”