A First Amendment lawsuit filed against Eastpointe has prompted the city to agree that its mayor will no longer prevent members of the public from criticizing her during public meetings.

The city agreed to an injunction Wednesday that prohibits Mayor Monique Owens from interrupting or shutting down speakers during public comment periods.

The injunction comes about a month after four Eastpointe residents filed a federal lawsuit against the city and Owens for refusing to let them speak during a public comment period at a city council meeting.

The lawsuit filed in U.S. District Court in Detroit alleges Owens violated the First and Fourteenth Amendment rights of four residents who tried to criticize Owens at a public meeting in September.

“This Order protects the First Amendment right of our plaintiffs and all Eastpointers to peacefully criticize Mayor Owens and other public officials while the lawsuit proceeds,” said attorney Conor Fitzpatrick of Foundation for Individual Rights and Expression, or FIRE, which filed the lawsuit on behalf of the residents. “The Order also bars Mayor Owens and Eastpointe from prohibiting discussion of Mayor Owens’ disputes with other City Council members. The First Amendment does not permit the government to censor discussion of embarrassing stories or unpopular policies.”

In September, the first-term mayor prevented residents from speaking, insisting they had no right to criticize her. As the meeting descended into chaos, with Owens berating a resident for explaining the First Amendment, the council’s four other elected members walked out of the meeting and didn’t return.

At issue were Owens’ disputed claims that Councilman Harvey Curley, who is in his 80s, assaulted her by yelling and putting his hands in her face during the open ceremony for the Cruisin’ Gratiot event on June 18. 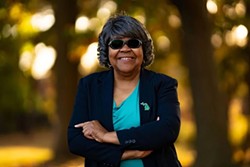 Courtesy of Mary Hall-Rayford
Mary Hall-Rayford is one of four plaintiffs who filed a lawsuit against Eastpointe Mayor Monique Owens.
Three residents turned up at the September meeting to defend Curley, whom they described as a gentle, hardworking public servant. Mary Hall-Rayford was the first to speak, but she didn’t get far.

“I’m going to stop you right there,” Owens said as soon as Hall-Rayford began to speak.

“We’re going to stop the council meeting because I’m not going to let you speak on something that has to do with police.”

“The injunction benefits not only me and the other plaintiffs,” Hall-Rayford said Thursday. “It benefits everyone who comes to a City Council meeting and wants to become involved.”