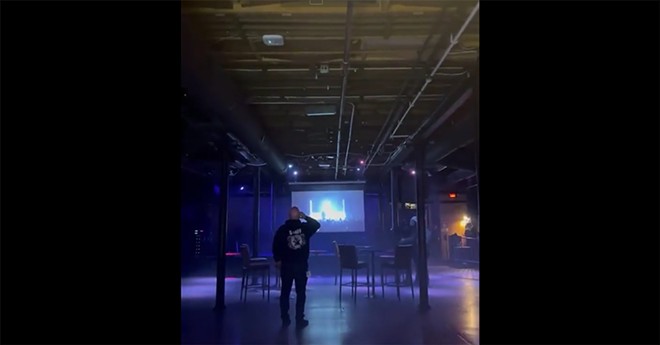 Screengrab, @RapClerk (Twitter)
A staff member in the Shelter watches as the floor of Saint Andrew's Hall above bends.

Detroit's Saint Andrew's Hall has been deemed unsafe and was shut down indefinitely following Tuesday's Baby Keem show, which was cut short after the weight of the rapper's bouncing fans caused a joint in its floor to break.

According to WJBK Fox 2 Detroit, the City of Detroit is now investigating whether the 1,000-capacity venue was oversold.

The venue is operated by Live Nation, which came under scrutiny following last year's deadly Astroworld incident, where dozens of fans were injured during a performance by Travis Scott that resulted in eight deaths.

When Metro Times emailed a Live Nation representative on Thursday to ask how many fans attended the Baby Keem show, they did not respond.

According to the Saint Andrew's Hall website, the rest of the week's events at the venue are canceled for now, while others are relocating to other venues, and the rest are to be determined.

British country-soul performer Yola announced on Twitter that her Friday gig was canceled.

"Work needs to be done to repair the floor before we'll be able to come back and play for you all," she wrote. "We are gutted, especially being first night of a long run, but everyone's safety comes first. We hope you understand and can't wait to come back and see everyone as soon as possible!"

Really gutted to share this update about my Detroit show https://t.co/wGWZdciEso pic.twitter.com/jU7h4EUF7v


Ticket-holders will be refunded, she said.

A clip circulating on social media shows a Saint Andrew's Hall employee in the venue's basement during the Baby Keem performance looking up at the ceiling, which bulges as the crowd jumps up and down. A source says the venue decided to end the show when it was discovered that a joint in the floor became loose.

At Baby Keem’s concert in Detroit, he had to stop the show early because the floor started to crack. pic.twitter.com/wNOviTWieO


In 2002, a concert by pop-punk band Sugarcult was also cut short due to issues with the floor, according to MTV News.

"I commend that rapper for stopping the concert — to say hey, I want to make sure my fans are safe," Parker said.

Parker also said, "Thank God it wasn’t a complete collapse and no one was injured."

At Astroworld, performer Travis Scott and other festival crew appeared to ignore signs of a crowd crush, including fans dramatically pleading to staff for help and emergency vehicles being deployed.