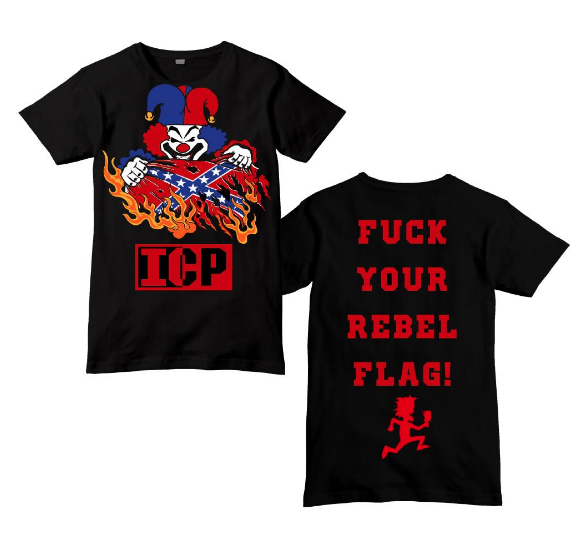 Let's give a "whoop whoop!" for the Juggalos, the clown-painted fans of Detroit rap group Insane Clown Posse.

Despite being classified by the FBI as a "gang" in 2011, Juggalos have made moves in recent months that show they have more empathy than most Republicans.

Most recently, ICP re-released a line of "Fuck Your Rebel Flag" T-shirts showing a clown burning a Confederate flag. The shirts are $25 and available at Psychopathic Records' website.

The shirts come at a time when Black Lives Matter protests have pressured city officials to take down racist monuments, including symbols of the Confederacy. Recently, NASCAR even told its fans to stop flying the Stars and Bars at its races.

And in April, ICP officially postponed its annual Gathering of the Juggalos festival due to the coronavirus pandemic, at a time when Republicans were fighting to keep the economy open despite the deadly virus that has killed more than 110,000 people in the U.S.

"The bottom line is simply that we refuse to risk even ONE Juggalo life by hosting a Gathering during these troubling times," the group wrote in a statement announcing the cancelation.

Meanwhile, southern Republican-led states are seeing a spike in COVID-19 cases after their leaders declined to close their economies or reopened them too soon.

In 2017, ICP and the ACLU attempted to sue the FBI to make it reverse its classification of the group as a gang. The lawsuit failed.

We have to wonder though: if these jolly Juggalos are a gang, what does that make the GOP?