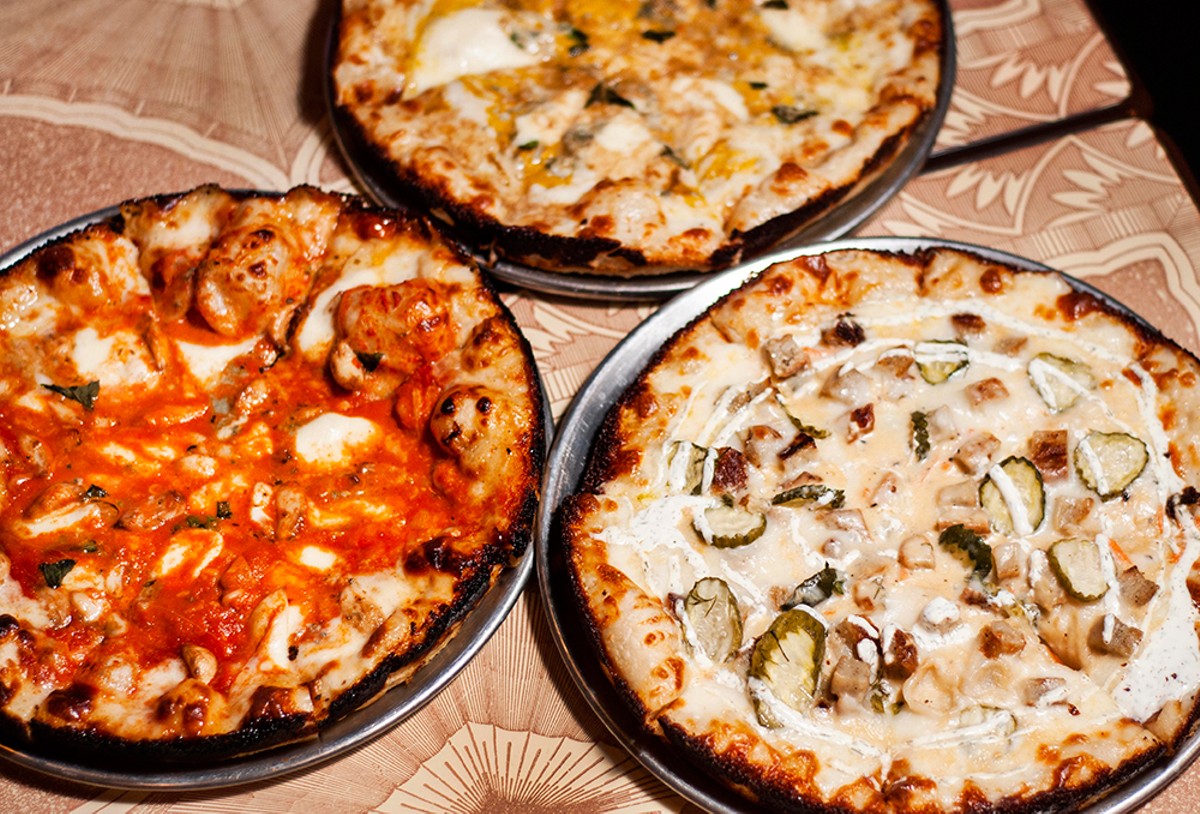 Somewhere in the Detroit-style/Sicilian pizza phylum is a new genre of pie, round and deep dish with a sourdough crust about an inch thick, and caramelized/carbonized cheese encircling the package along the edges. It's Hamtramck-style pizza.

As pizzaiolo Jeremy Duncan, who gave his pies the tongue-in-cheek moniker, put it: "It's Detroit around the edges, like Hamtramck." He also simply calls it "puffy pan pizza."

Also like Hamtramck, there's also a Polish thread or two at HenriettaHaus, the Hamtramck-style pizza purveyor co-owned by Amy and Jeremy Duncan. Arguably its best pizza is the Polglish, a dill pickle soup-inspired pie, and the vegetarian cafe opened on Hamtramck's south side in a building that formerly housed Albert Sinicki and Son's Meat Market and Grocery, a Polish deli.

After attempting to buff a century's worth of szynka juice from the walls and floors, the Duncans built out a meatless cafe that's also a coffee roastery, pizzeria, and small bar. A few things to note: HenriettaHaus's food menu is short – basically four pizzas and soup. The cafe doesn't have phones, so no ordering ahead. That means you eat in, or come in to order carryout.

It might even take a minute to get your pie because the kitchen is small and run by one pizza maker. But that's OK, because Amy developed an impressive list of cocktails worth passing a wait with, and stocks way more than the just Michigan beers — plenty of Belgian sours, Oud Geuze Boon Black Label, Hitachino and Rothaus Pils, and De Proef-Surly's Black Star.

You'll also be hard-pressed to find a more original, whimsical and pleasant restaurant interior. Amy disassembled and chopped up pieces of furniture of Eastlake, renaissance revival, and other styles, like an antique bed, dining room table, pump organ, piano, and china cabinet. The pieces were reassembled to help make the bar, bar back, and other furnishings. That's accompanied by weird paintings, like a portrait of the titular Henrietta, or the Duncan's dogs in a sailboat in the Detroit River, and plants all set against a teal and subway tiled wall.

When you do get your Polglish, you'll find a sauce that is basically Amy's pickle soup recipe thickened with a roux — vegetarian stock, lots of butter, flour, and milk that's whipped in until everything thickens, at which point Jeremy adds pickle brine, carrots, parmesan cheese, and pepper, then cooks it all down. The sauce is applied to the crust, and topped with mozzarella cheese, chopped potato pancakes from Srodek's, sliced pickles either from Srodek's or Grillo's, and a sour cream-dill drizzle.

The Polglish ranks in the same echelon as Pie Sci's Salami Kilpatrick, Supino's "Supino," San Morello's Tartufi, or anything from Loui's. These are the pies that stand out in a city with too many pizzerias. If you want to try it, maybe act fast. It's a wintertime pizza, and will be gone in the summer. Jeremy has been talking about a vegetarian cevapi pizza. Please do.

The pizzas' success owes in no small part to the crust. Jeremy blends King Arthur AP, bread, and Caputo 00 flours, and the dough's slow, two-day rise gives the wild yeast time to do its thing and develop a slightly more complex and sour flavor. Once cooked, it holds a focaccia-like crust that's similar to Detroit-style pizza.

It's a fantastic base for all four pies, and especially the Sweet Gerald, made with a red sauce, hot (as in spicy) honey drizzle, roasted garlic, blue cheese, mozzarella, parmesan, and basil. I have a pretty strong reflex against honey on pizza, but it only adds a slightly sweet dimension, and that component is especially pleasant in the carmelized/carbonized cheese around the pie's edge.

The Pangherita is a margherita in deep dish form — mozzarella, basil, and a "red sauce" that's more like orange-red from the emulsified olive oil and salt and pepper. The sauce is made with San Marzano or San Marzano-style tomatoes that are slightly sweet, and red wine vinegar bumps the saue's acidity and helps it pop.

Finally, the Penniman is similar to the margherita, except Duncan swapped out the tomatoes for peaches after it occurred to him that peaches and tomatoes are similar in their sweetness and acidity. With a few tweaks, the experiment worked, and he also adds blue cheese to the mix, as well as balsamic vinegar in place of olive oil. It's topped with parmesan and mozzarella cheese, and though it sounds like a sweet pizza, it's actually quite balanced with a savory and sweet element.

At some point, customers may be able to build their own pies, but Jeremy says HenriettaHaus is still looking for good fake meats, and they're happy with the slow growth.

Amy's soup is a lemony — very lemony on some days — mix of chickpea, carrots, celery, orzo, tons of oregano, salt, and pepper, and it's awesome. Sometimes HenriettaHaus offers sweet Belgian waffles or a moist pineapple-banana cake with cream cheese and brown sugar frosting. There's also some talk of expanding the menu to include salads, sandwiches, or cheese boards.

The pizza is only half the draw. The Henrietta is the cafe's signature drink, with coffee, bourbon and lemon — an ingredient list that might give one pause, but is actually a best seller that works really well because the mix of acidic lemon and the coffees' oils imparts a creaminess. It's part of a roster of coffee-based drinks, and Amy just purchased an ice shaver for "snow con-ish, slush-y options" this summer.

The whole HenriettaHaus concept started in 2003 when Amy began roasting coffee, and she eventually set up a small shop at the Rust Belt Cafe in Ferndale in 2011. She sources beans from Oakland, California's Green Coffee Brokers, which buys directly from farmers. Amy says she gravitates toward Ethiopian and Guatemalan, "crowd pleasers with not too crazy of a profile," and her roasts are generally light to medium.