There's now a GoFundMe to get a pair of Buffs for Gov. 'Big Gretch' Whitmer 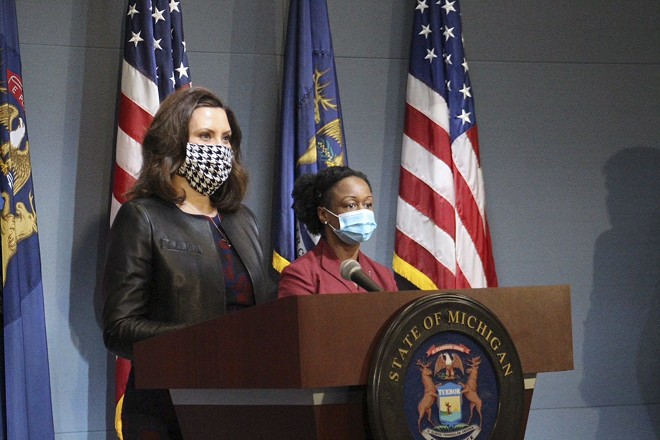 Following the release of “Big Gretch” this weekend — self-proclaimed “King of Parody Rap” Gmac Cash's tribute to Gov. Gretchen Whitmer's aggressive coronavirus efforts, which earned her a new affectionate and protective nickname — Cash is now taking his appreciation a bit further with a GoFundMe campaign to get Whitmer the Cartier Buffs she deserves.

Cartier’s C Décor white buffalo horn frames, or "buffs," have become a coveted status symbol in Detroit over the last 30 years. The accessory is so exclusive that on the Cartier website, one must request a price for the glasses, which are described as “simple,” “elegant,” and “crafted in the expertise and tradition of Cartier eyewear.”

The crowdfunding effort launched by Gmac Cash Sunday night is hoping for $2,500 in donations because, according to the GoFundMe's description, “Big Gretch Has Earned Her Buffs From The City Of Detroit.” And the campaign is well on its way to reaching its goal — and quickly.

According to Gmac Cash's lyrics, Whitmer has earned her buffs by not giving in to President Trump's bullying or the fury of gun-toting, MAGA-loving protesters, who carried assault rifles into Michigan's Capitol Building last week in response to being told to stay home to combat the spread of the coronavirus, which has claimed more than 4,000 Michigan lives. The Detroit rapper also praised Whitmer for making demands, like the closure of nonessential businesses and issuing a series of extended stay-at-home orders for Michigan residents, based on science.

“If you wanna leave the state, you can stay gone/ but right now Big Gretch says stay home/ all that protesting was irrelevant,” Gmac Cash spits on “Big Gretch.” “Big Gretch ain't tryin' to hear y'all or the president/ How we gon' take orders from a non-resident?/Talkin' about it's safe but he ain't comin' with the evidence.”

As it turns out, Whitmer loves the nickname and the song. A Twitter user put Gmac Cash's song to a video compilation of Whitmer exhibiting "Big Gretch energy" with a selection of stern and authoritative finger-pointing, some national television side-eye, and her appearance on The Daily Social Distance Show with Trevor Noah, where she flexes her “That Woman From Michigan” shirt — a salty nod to an even saltier comment made by President Trump, who has not been shy about his disapproval of Michigan's Democratic governor.

“See ya at the cookout, @GmacCash,” Whitmer said in a Twitter response. “Until then, Big Gretch says stay home and stay safe!"

This is too much 😂
Love the nickname.
Love the song.
See ya at the cookout, @GmacCash.
Until then, Big Gretch says stay home and stay safe!