Celebrity makeup artist AJ Crimson was a trailblazer in the beauty industry, and passed away just after the film wrapped 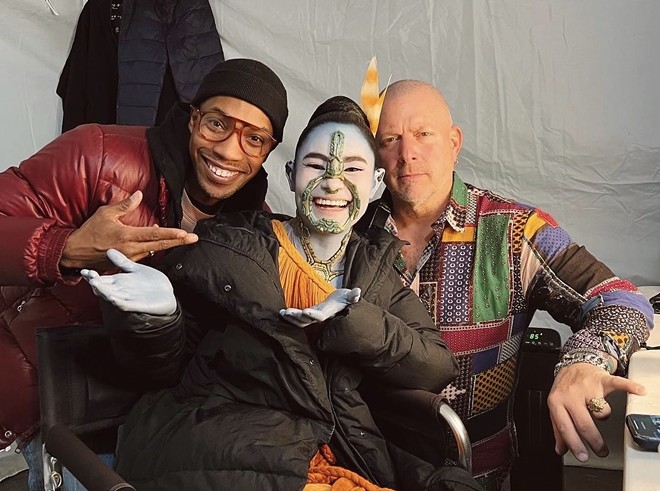 SPOILER ALERT: This article contains plot points for Black Panther: Wakanda Forever, so if you haven’t seen it yet, you may want to come back and read this later. Don’t say we didn’t warn you.

While excited superhero fans couldn’t wait to flood theatres for the release of the Black Panther sequel Wakanda Forever in November, Rochelle Jackson waited nearly a month to watch it. She knew it would be triggering — the movie was the last project her brother, celebrity makeup artist AJ Crimson, worked on before his untimely death.

Crimson is a Detroit native who was well-known and loved in the beauty industry. The 27-year-old died after drowning during a trip to the Caribbean island Bonaire on March 30, shortly after filming wrapped on Black Panther: Wakanda Forever.

Jackson expected to see an “in memory of” tribute to her brother in the film’s credits, but she didn’t expect the movie’s plot to be so relatable. The story involves the death of the series hero; Marvel was forced to pivot following the death of Black Panther star Chadwick Boseman, who played T’Challa and died from colon cancer in 2020.

“Man it hit me. Like from the very beginning,” she tells Metro Times over the phone. “T’Challa dies in the beginning and his sister’s tryna come up with a potion and save him… So of course that hit me because my brother is gone. That whole sister-brother dynamic right there in the beginning of the movie was triggering.”

Midway through the film, T’Challa’s mother Queen Ramonda drowns, mirroring Crimson’s death, which was hard for Jackson to watch. 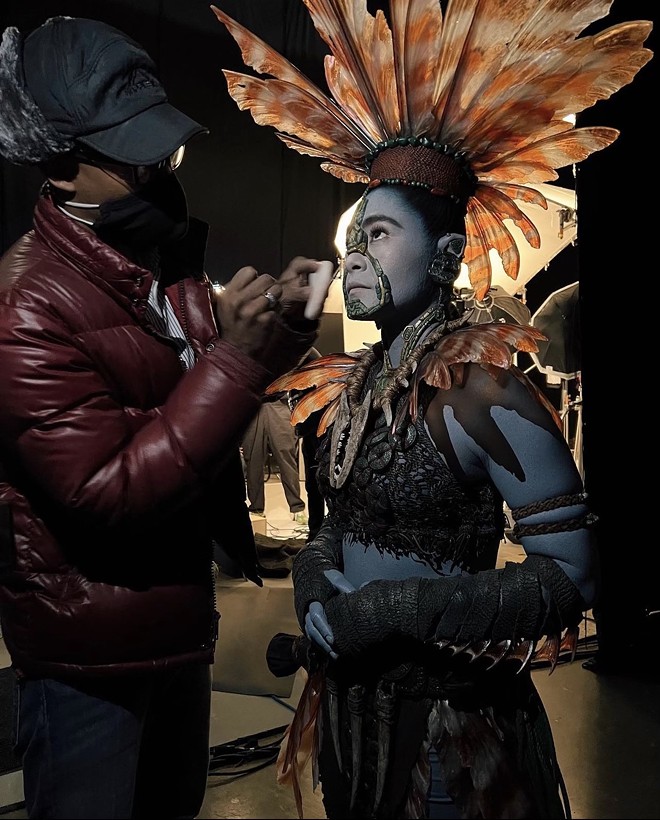 But water also plays a role in healing for T’Challa’s sister Shuri, the same as it did for Jackson. The film ends with Shuri sitting on a beach paying her respects to her ancestors as she has flashbacks of T’Challa.

“I’ve sat on that beach and talked to my brother,” Jackon says. “I’ve had that exact same moment. I related way too much to that movie.”

Jackon says her family knew Crimson was working on the film but didn’t know the extent of his role since he had to keep things relatively secret during filming. She says she only remembers him working long hours and responding to her texts with messages like “I gotta get back to you, I’m on set.”

It’s now clear that he worked on the makeup for Namora, an aquatic warrior who lives in a city under the sea, played by actress Mabel Cadena. Cadena posted behind-the-scene photos of Crimson applying her full-body makeup, with the message “Love you and miss you AJ. RIP.”

He also worked on Dominique Thorne’s character Riri Williams, also known as Ironheart. Jackson says Thorne came to Crismson’s funeral to pay her respects, but she didn’t know who the actress was at the time.

Crimson was a trailblazer for inclusivity in the beauty industry. He founded his own cosmetic line, AJ Crimson Beauty, in 2012 after having difficulty finding products that matched Black women’s skintones.

He first hit the movie scene while working on the set of 8 Mile, which was partially filmed in Detroit. Since then, the makeup mogul’s work has been featured in movies and TV shows like Scandal, Empire, The Real, American Horror Story, The Perfect Match, and Back to Life.

He had a long list of celebrity clientele including Estelle, Angela Bassett, Fergie, Hilary Duff, Raven-Symoné, Lauren London, Naturi Naughton, and many more.

When news broke of his death, several Hollywood stars flocked to social media with memorial messages, speaking to his joyful spirit and positive presence that influenced others to shine as brightly as he did.

“You always made me feel so beautiful with your talents and to be around your energy was always full of laughs and good vibes,” singer Christina Millian wrote in a tribute to Crimson on Instagram. “You made your own lane. You created it yourself and I always told you how much you inspired me to be my own entrepreneur. You were doing it before anyone else.”

Jackson wants people to know that her brother was “a truly amazing person with extraordinary drive” who greeted everyone with enthusiasm and a smile.

“I adored him,” she says. “His heart was so good. This is rare in sibling relationships, but he never ever said one harsh word to me that made me feel less than. I thought that was pretty amazing. He was such a sweetheart. He was stern, he was smart, and he wasn’t a pushover. But man, his heart was amazing.”

Crimson’s physical body may be gone, but his presence is still with his sister as an ancestor.

“He’s been with me really strong ever since I went to go see the movie,” Jackson tells us with optimism. “At first I saw the movie and I was heartbroken all over again. I’m in the car bawling, and it was just really sad for the first couple of days. But now, I hear his laugh. Literally, like the night before, I felt that he was here in my room. He would always come in town and stay with me and we’d be laughing and I felt that like he was just chilling in my room with me. That’s the thing that I love and remember the most is the laughs we had. His laugh is infectious and it would just make the joke or whatever it was 10 times more funny.”

After living in Japan and traveling across Asia, Randiah Camille Green realized Detroit will always be home. And when she says Detroit, she's talking about the hood, not the suburbs. She has bylines in Planet Detroit News , Bridge Detroit , BLAC magazine, and Model D . Her favorite pastimes are meditating...
Read More about Randiah Camille Green
Scroll to read more Movies articles