Courtesy of Broadway in Detroit
The cast of Ain't Too Proud: The Life and Times of The Temptations.

The audience can barely contain their excitement as the lights dim at the Detroit Opera House, illuminating a marquee for the Temptations.

When the Temps finally take the stage with their unmistakable harmonies and signature dance moves, all bets are off. The audience erupts in applause and the collective joy is tangible as they sing along with the Motown group.

In reality, they’re just actors playing Otis Williams, Melvin Franklin, Paul Williams, Eddie Kendricks, and David Ruffin, but if you close your eyes, you could easily be fooled into believing you were at a 1970s Temptations concert.

Dominique Morisseau’s broadway musical Ain’t Too Proud: The Life and Times of the Temptations finally made its way back to Detroit this week after a successful season on Broadway. The homecoming is two years in the making, as the Detroit show was originally supposed to happen in 2020 but was pushed back due to COVID-19. 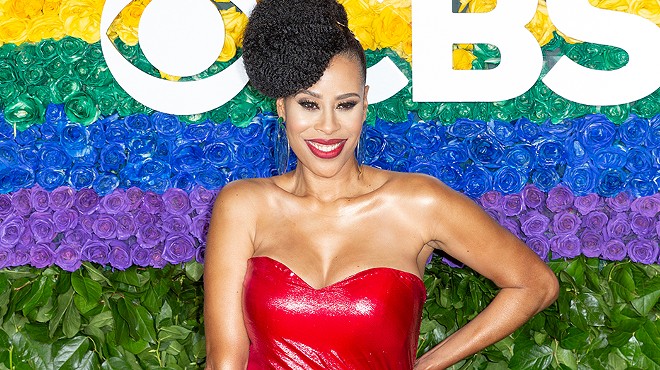 The musical recounts the group’s turbulent rise to becoming the No. 1 R&B group of all time, told through the eyes of Temptations founder Otis Williams. It feels more like being at an actual Temptations concert with frequent asides by Williams (played by Marcus Paul James) as he gives behind-the-scenes insight through the Temps’ hurdles.

We guess we should put a spoiler alert on this review, but if you’re familiar with the story of the Temptations, the musical’s plot won’t come entirely as a surprise.

After moving to Detroit from Texarkana, Texas, Otis Williams got wrapped up in the street gang life and spent several months in juvenile detention. Upon release, he dedicated his life to music, eventually forming the Temptations when he was around 19 years old. The group signed with Motown Records and went through several lineup changes as they navigated infighting, addiction, life on the road, and race relations as their music grew in popularity across the country. By the end, each member of the “classic five” has his tragic date with death, except Williams, who is the last living original Temptation.

Even if you’re familiar with the Temptations’ fascinating story, the musical takes the audience on a ride that feels as if you were watching it happen in real-time.

All the pivotal moments are present. There’s the 1966 Motown picnic where Temps’ lead vocalist David Ruffin publicly battered fellow Motown singer Tammi Terrell, who he was dating at the time. We witness how the anti-Vietnam War anthem “War” was originally written for the Temps but was ultimately given to Edwin Starr, who got a No. 1 hit with the track.

We even see how “Papa Was a Rolling Stone” nearly wasn’t recorded because the opening lines “It was the third of September/ That day I’ll always remember, yes I will / ‘Cause that was the day that my daddy died” offended frontman Dennis Edwards. Apparently, his father actually had died on Sept. 3.

Through it all, we see how the Temptations was a true brotherhood, even when the members were at each other’s throats.

Courtesy of Broadway in Detroit
The show felt like an actual Temptations concert.

And the actors hit all the notes (both literally and figuratively), from Harrell Holmes Jr.’s spot-on depiction of Melvin Franklin’s deep bass voice to Jalen Harris’ imitation of Eddie Kendricks’ falsetto.

The only part of the production that felt slightly off was the lackluster performance of what was supposed to be the Supremes. But even that (kinda) makes sense, as the musical wasn’t about them — it was the Temps' time to shine.

Though audience members may know how this story ends, the fascination and wonder lie in the journey. Morisseau’s witty and masterful storytelling coupled with the cast’s brilliant performance and an impeccable live orchestra bring it all together.

Morisseau’s work has a knack for making us laugh and then cry only a few minutes later. There are silly moments like David Ruffin ambushing the group onstage after being kicked out and starting a back-and-forth mic battle with Dennis Edwards. But when "Papa Was a Rolling Stone" pauses at “and when he died” for Williams to tell the story of each member's death, it’s hard not to get choked up.

After two hours of watching James play Williams at the media night we attended, the real Otis Williams took the stage and gave praise to Detroit, which he says will always be home. He was joined by Morisseau and Shelly Berger, who managed the Temps for over 30 years. It was a fitting and heartfelt reunion for the larger-than-life show.

Older generations of Temptations fans will probably delight in all the moments in the group’s career they may remember happening. Younger fans who weren’t around for Motown’s heyday (like me) will probably learn more than they’ve ever wanted to know about the group. Both will walk away with a newfound respect and appreciation for the Temps.

Ain’t Too Proud: The Life and Time of the Temptations runs at the Detroit Opera House through Aug. 28. Showtimes are 8 p.m. Tuesdays-Saturdays, 7:30 p.m. Sunday evenings, and a 2 p.m. matinee on Saturdays and Sundays. Tickets start at $35. For more information, see broadwayindetroit.com.