Jack White kicks off tour, Dearborn’s Ramadan Suhoor fest is back, hip-hop in Eastern Market, and more things to do 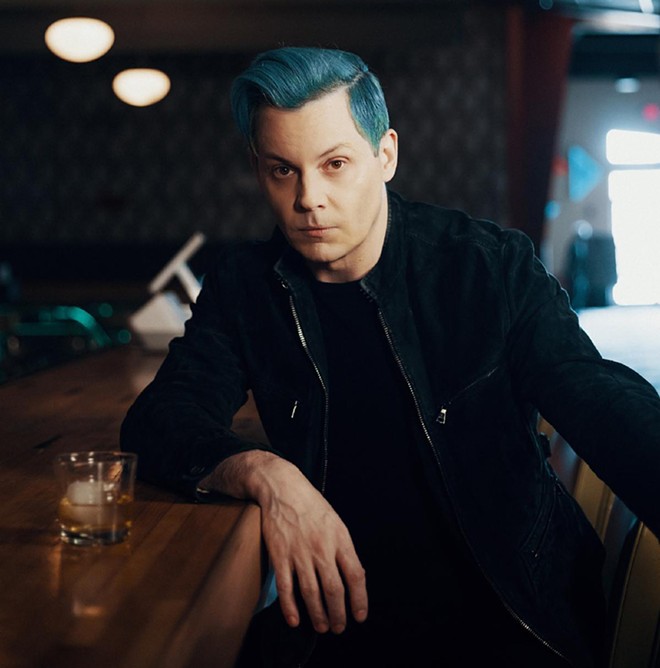 Paige Sara
Jack White returns to Detroit on Friday and Saturday to kick off his new tour.

Friday, April 8 and Saturday, April 9: Like many of us, rock star Jack White appears to have emerged from the pandemic shutdowns as a bit of a changed man, now sporting a dyed-blue Elvis-esque hairstyle and reportedly working with a new team. But while most of us were cooped up inside binging Netflix and playing Nintendo, the Motor City native was busy recording not one but two new full-length solo records — the first of which, Fear of the Dawn, gets released on Friday, while the second, Entering Heaven Alive, drops July 22. If the lead singles are any indication, the former appears to be a louder, more electric and eclectic effort (tracks like “Taking Me Back” and “Fear of the Dawn” see White seemingly cranking his guitar amp to 11, while “Hi-De-Ho” includes a Cab Calloway sample and a feature from rapper Q-Tip) while the latter will be a quieter, more acoustic-driven effort (with “Taking Me Back” reprised as a folksier version). White has also named his upcoming tour “The Supply Chain issues tour,” which isn’t just a cheeky response to the economic fuckery we’re all experiencing; he recently shot a video at his Third Man Records Pressing facility in Detroit, calling on the major labels — Warner Bros., Universal, and Sony — to invest in once again building their own vinyl record manufacturing plants. The tour kicks off in Detroit with double dates at White’s beloved Masonic Temple; the Sugar Tradition and Olivia Jean are also on the bill both nights. —Lee DeVito

Friday, April 8: The traveling pop-up Art, Beats, + Lyrics has been celebrating hip-hop and urban art in cities around the country for 17 years and will make it to Detroit for the first time on Friday. The one-day festival features work from more than 50 visual artists, music performances, and lots of booze. The festival is presented by Jack Daniels Tennessee Honey (hence the booze) and is curated by the art organization Cult Creative. It started out in 2004 as just a local art show in Atlanta and has since grown into a national festival featuring acts like Kendrick Lamar and Snarky Puppy over the years. Friday’s show will feature a performance from Southern rapper Bun B, and art by ArrrtAddict (AKA Lisette Correa) and Charly Palmer, who recently did a cover for Time magazine. —Randiah Camille Green

Doors open at 7 p.m. on Friday, April 8 and the event goes until midnight; Eastern Market, Detroit. Entry is free, but you must RSVP at artbeatsandlyrics.com. Must be 21 or older to attend.

Friday, April 8-Sunday, April 30: The Ramadan Suhoor Festival is back after a two-year hiatus, and this year it’s taking over Dearborn’s Fairlane Town Center parking lot with more than 50 food trucks and vendors. The outdoor culinary extravaganza is held in honor of Ramadan, when Muslim practitioners fast from dawn to sunset. As such, the festival takes place from 11 p.m. to 3 a.m. (worshippers can eat before and after the fasting period each day). “Suhoor” is the meal eaten before sunrise during Ramadan to tide Muslims over during their fast. Though the festival is relatively new, starting in 2018, it draws thousands of people a day from the Midwest and even Canada. And it’s not just frequented by Muslims. Everyone from self-proclaimed foodies to night owls or those just wanting to learn more about Ramadan is welcome. —Randiah Camille Green

The festival goes from 11 p.m. to 3 a.m. every Friday and Saturday from April 8 to April 30; ramandansuhoorfest.com. There is a $1 entry fee.

Dearborn’s Ramadan Suhoor Festival returns for late-night eats: The outdoor fest draws thousands of Muslims looking to get a meal before their fast starts at sunrise

Saturday, April 9: In another life, Benjamin Sobczak was a rapper who performed as frontman of the hip-hop group Mice & Musicians. Now he’s a cannabis attorney for the Michigan-based cannabis chain Pleasantrees, but his love of music hasn’t gone away. Sobczak and Pleasantrees are helping to bring up the next generation of local musicians with the Potency Test, a new battle of the bands-style competition in which the winner earns $5,000 cash and studio time. Participating artists include Pontiac rapper Arie KD, Lansing rapper Kwaj, Battle Creek singer-songwriter Sam Luna, Detroit hardcore band Adventurer, Brighton rock band V*A*S*E*, and Kalamazoo singer-songwriter Grace Theisen. The six acts will be judged by three guest judges: “White Boy” Rick, the former teenage FBI informant who was recently freed from prison, whose story has been told as a Hollywood movie and an Eminem cameo on Starz show BMF, and who also launched his own cannabis brand, The 8th; Chad Nicefield, frontman of rock band Wilson; and Pontiac City Councilwoman Melanie Rutherford, who is also a Grammy-nominated singer-songwriter. All proceeds will also go to charity. —Lee DeVito