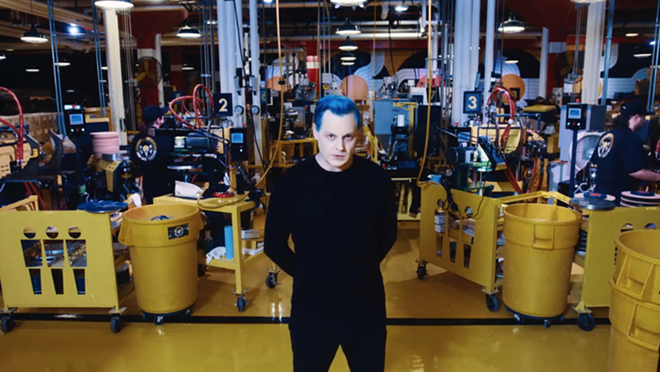 The economic disruption caused by the pandemic is being felt by everyone — even rock star Jack White, who named his upcoming tour "The Supply Chain Issues tour."

And apparently White has had it. In a video posted by his record label Third Man Records on Monday, White called on the major labels — Warner Bros., Universal, and Sony — to build their own vinyl record manufacturing plants to help alleviate the backlog that is causing massive delays for new releases.

White filmed the video inside Third Man Pressing, the Detroit pressing plant he opened in 2017 "using my own money," he said. In the background, machines can be seen stamping out limited edition copies of White's forthcoming Fear of the Dawn, his fourth solo album, due on April 8.

"It's 2022. Now it's no longer a fad. Vinyl records have exploded in the last decade, and the demand is incredibly high," White says in the video. "A small punk band can't get their record for eight to 10 months."

He even invoked a classic Detroit band recently nominated for the Rock and Roll Hall of Fame to underscore his point, adding, "As the MC5 one said, 'You're either part of the problem or part of the solution.'"

The video ends with the message, "Please build your own record plants again. The vinyl industry needs it. Thank you."

You can watch the video below.


Fear of the Dawn is one of two records White plans to release in 2022. The other, Entering Heaven Alive, is due July 22.

White's "Supply Chain Issues Tour" kicks off with a pair of homecoming shows at Detroit's Masonic Temple Theatre on April 8 and 9, followed by an April 10 show at Van Andel Arena in Grand Rapids.