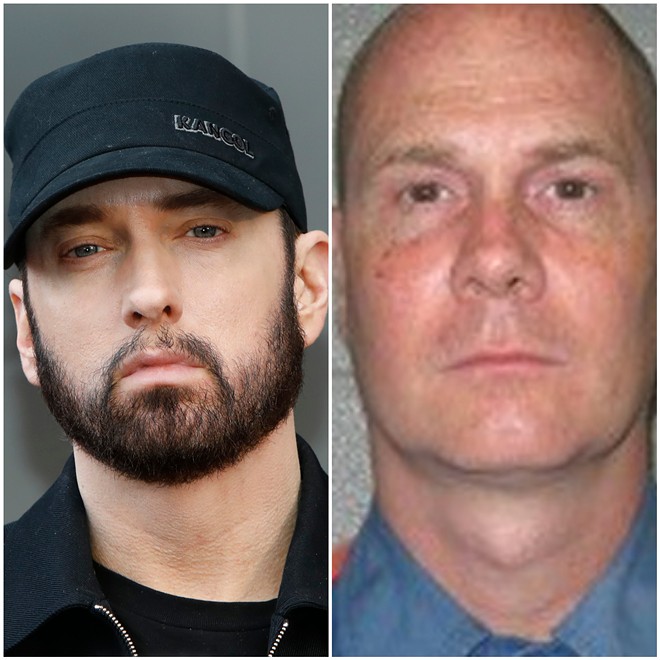 The performance will mark the first small screen appearance for the Detroit "Rap God" since 2010, when Eminem appeared as himself on the HBO series Entourage. We need not forget that Eminem is also an Academy Award-winning performer after he landed an Oscar in 2003 for Best Original Song for the anthemic "Lose Yourself" from his 2002 semi-autobiographical film 8 Mile, which he starred as Jimmy "B-Rabbit" Smith.

The series, which is set to premiere on Sep. 26, focuses on Detroit's Black Mafia Family, led by brothers Demetrius “Big Meech” Flenory and Terry “Southwest T” Flenory in the 1980s. The timeline, of course, coincides with the highly publicized  conviction of Wershe.


Oh yeah i’m bringing the big dogs out, I couldn’t do a show based in Detroit without incorporating the legend @eminem. Got him to play white Boy Rick in BMF, this shit is out of here. 🚦Green Light Gang #bransoncognac #lecheminduroi pic.twitter.com/YaklhzgJER


At 14, as the youngest FBI informant ever, Wershe helped bring down a cocaine trafficking ring. But after the FBI didn't need him anymore, Wershe stayed in the drug world and was eventually busted selling cocaine himself at the age of 17. In 1988, Wersh was sentenced to life in prison due to Michigan's "650-Lifer Law" which gave life sentences for anyone found possessing 650 or more grams of cocaine or heroin.

Wershe was paroled from a Michigan prison in 2017 but instead of being set free, Wershe was sent to prison in Florida to do time for a 2006 conviction stemming from his involvement in a car theft ring while jailed.

Eminem in BMF will be the latest portrayal of Wershe, following  2018's dimly received biopic White Boy Rick starring Matthew McConaughey. However, Em's take on Wershe appears to be a minor guest starring role in the series.

Earlier this summer, Wershe and his attorney announced his plans to sue the FBI and Detroit Police Department for alleged child abuse, after they “put him amongst gangsters, killers, drug dealers and thrust him into the world of drug trafficking, and then all turned on him to cover up the illegal and embarrassing nature of their conduct.”