While Detroit has long appreciated Cartier, rumors that the brand did not feel the same have been whispered for quite some time 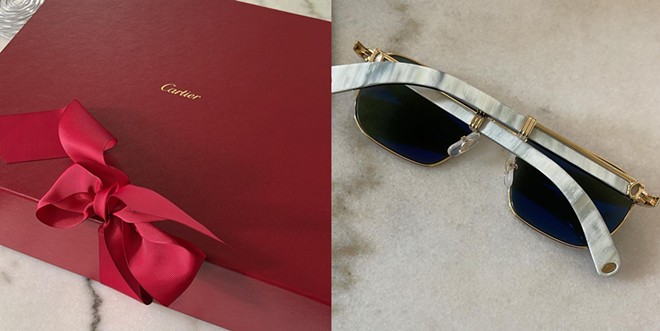 This article was updated with a statement from Cartier.

Cartier frames are to Detroit what Timberland boots are to New York. They’re a part of Detroit culture, and one could say an essential Motor City status symbol. In 2019, Kash Doll gifted Big Sean a pair of Cartier glasses, Big Gretch found herself offered a pair in 2020, and in 2021, Detroit Piston Cade Cunningham whipped out a pair after he was drafted to the team. 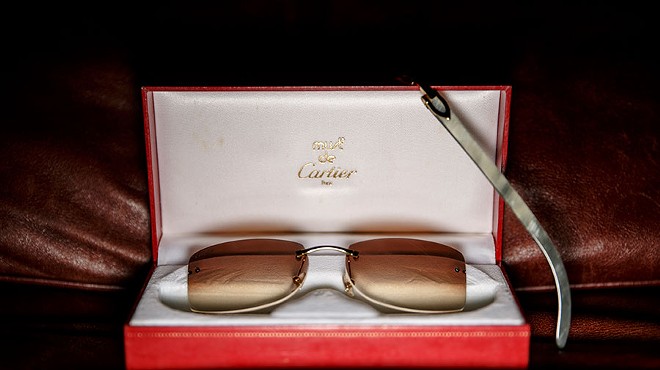 How Cartier sunglasses became a Detroit fashion — and a flashpoint for violence: Detroit Cartier City

Whether they’re woods, wires, or the highly coveted Buffs, Cartier frames can be seen at weddings, baby showers, proms, clubs, and on a good Sunday, the pulpit. Detroit values Cartier frames, and last week, the luxury fashion house showed its appreciation by gifting a few Detroit celebrities a new pair of Buffs from their fall/winter eyewear collection.

According to photos circulating across social media over the weekend, artist Philip Simpson, DJ Killa Squid, and rappers Payroll Giovanni and Lil Blade were gifted the new frames. Inside the signature red box containing the frames was a note that not only thanked the receivers for supporting Cartier, but also acknowledging Detroit.

“We recognize the influence Detroit has had on our eyewear over the years and how deeply rooted Cartier has become within the city’s culture. It is a relationship that we value and will continue to strengthen,” read the included note. It was signed by Mercedes Abramo, the president and CEO of Cartier North America, and Erica Lovett, Cartier North America’s Head of Diversity & Inclusion.

According to LinkedIn, Lovett began working for the fashion house in October 2020. 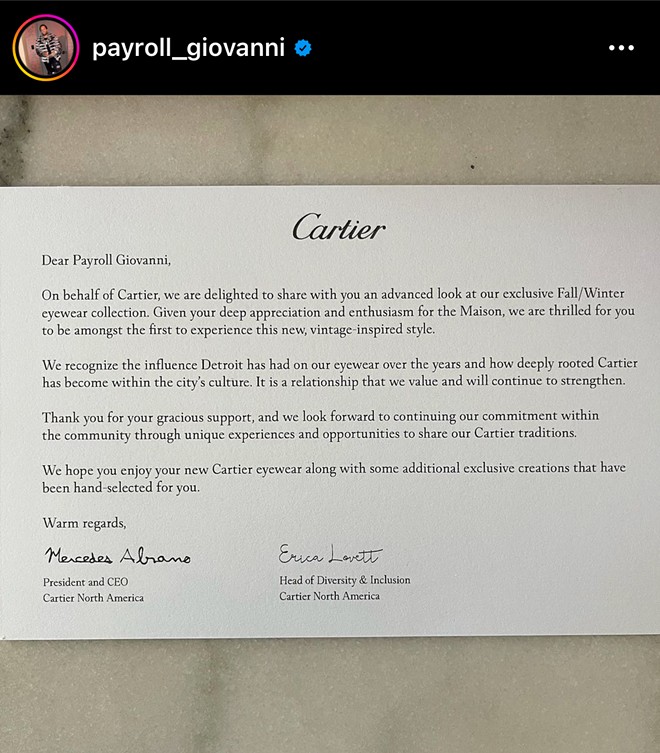 While Detroit has long appreciated Cartier, rumors that the brand did not feel the same have been whispered for quite some time.

In 2017, a story about Cartier was mysteriously removed from GQ magazine’s website shortly after being published, which linked the luxury eyewear to violence in Detroit.

It would be highly unusual for a publication to chose to delete a story it had already published. It sure seemed like Cartier pressured GQ to remove the article. At the time, Cartier did not respond to our requests for comment, and GQ denied that it removed the story due to pressure from Cartier. “It was an oversight, the preview link wasn’t circulated through the proper channels and the story inadvertently went live for a short period of time,” a GQ spokesperson told Metro Times in 2017. “Once we realized the error, we took it down.” (After this article was published, Cartier responded. You can read the statement at the end of this article.)

The story never reappeared on the GQ website. It eventually found a home at Metro Times, though the writer offered no comment about what happened at GQ.

Despite the negativity, Cartier frames remain an integral part of Detroit history, fashion, and culture. A symbol of both status and celebration, Buffs remain sought after and cherished in the city.

After this story was published, Cartier responded to our request for comment. The full statement follows.

Thank you for your note and for reaching out. I’d like to introduce myself – I’m Erica Lovett, Head of Diversity & Inclusion at Cartier North America. One of the key areas of focus within my role is identifying and expanding the Maison's engagement with, and representation of, diverse communities within North America.

I joined the Maison in 2020, so the story you referenced was before my time here. As such, I’m unable to provide any additional information as to why GQ ultimately chose to remove the article from their website. I do appreciate you sharing the subsequent story that appeared in your outlet, for my reference.

What I am able to share is, the passion, support and enthusiasm for our Maison – throughout the Detroit community – is fully recognized and appreciated by both our local Cartier teams and by our international counterparts. I am aware that Cartier previously had a boutique in Troy, Michigan – again, prior to my time with the Maison – so I was delighted to participate in the pop-up boutique we executed in the summer of 2021 in the same area. It provided me, personally, with the opportunity to better understand our longstanding commitment to the people of the greater Detroit area and to witness their appreciation and loyalty to Cartier, firsthand.

I was able to meet many people who shared personal stories about what Cartier means to them and the impact of Cartier eyewear within the Detroit community. Maintaining those relationships has been of the utmost importance to me.

In continuation, we have recently conducted a new initiative, engaging local tastemakers – some of whom we had the pleasure of meeting last summer – and others who have a deep commitment to art and culture within the city.

While our relationship with Detroit is by no means new, we do continue to explore new opportunities to support and further engage the Detroit community.

Thank you again, for reaching out.

Lee DeVito contributed to this story.

Born and raised on Detroit's Westside, Alex Washington is about as Detroit as they come. She judges your coney island order and serves a mean side-eye when anything across Eight Mile is called "Detroit." Her writing has been published in Real Detroit Weekly, The Detroit Free Press, Model D, BLAC magazine, and...
Read More about Alex Washington
Scroll to read more Culture articles