The group could be the longest continuously operating Black arts organization in the U.S. 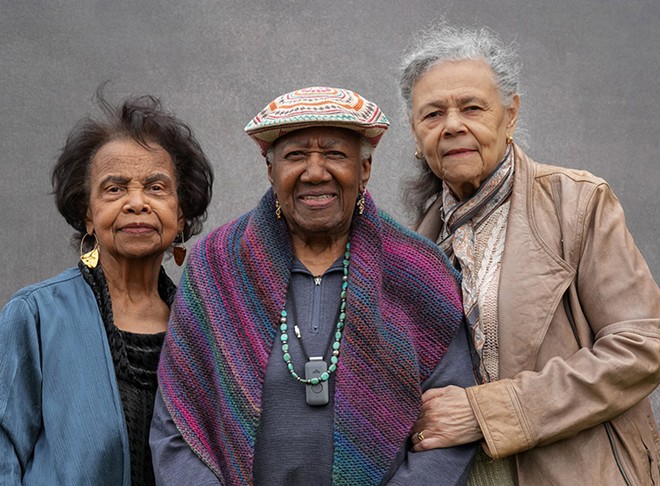 Founded in Detroit in 1952, and currently located in a quiet neighborhood tucked between I-96 and Tireman and Livernois Avenues, Arts Extended is a 70-year-old project that is a contender for the nation’s longest continuously operating Black arts organization.

Arts Extended began as a group for Black arts educators and professionals, inspired by art’s potential to enrich lives but excluded from much of the city’s art establishment. Initially, they met monthly to discuss topics relating to art and collecting. In their early years, they hosted two annual pop-up shows to display their art. The first was a group show of members’ work, and the second was a more commercial exhibition in the run-up to Christmas. They invited their friends and started to develop an educated collector base.

In the late 1950s, they moved to their first gallery, located on the second floor of 100 East Warren Ave. in Detroit’s Cultural Center, and a couple of years later, they moved to a street-level location at 1549 Broadway St. in Harmonie Park. Opening a gallery on a major downtown thoroughfare, with regular exhibitions and opening hours, was a ground-breaking action for a Black art collective at that time. The building no longer exists, but was situated in what is now a parking lot next to the long-standing jewelry business Simmons & Clark.

Subsequently, the group had project space in the Book Tower before moving to the David Whitney Building, where they inhabited two locations, the first of which had previously been the Siden Gallery. In the Whitney Building, which in the late 1980s was the center of a vibrant Black gallery scene, they were neighbors of eminent Detroit gallerist George N’namdi, and later they would move to the art campus he established in what is now called Midtown. In between were spaces on Mack Avenue near Grand River Avenue and Parsons Street east of Woodward Avenue. Their final move in the city center was a short hop sometime around 2010 to a gallery on Garfield Street across from MOCAD.

The group had around 30 members, of whom three remarkable Black women artists and educators are especially central to the project’s long history.

Dr. Cledie Taylor was a founding member of Arts Extended in the early 1950s and has been a quietly forceful presence in the Detroit art world since. Widely traveled, she is best known artistically as a metalsmith and sculptor. Dr. Taylor studied with the esteemed metal arts Professor Philip Fike at Wayne State University, with a particular focus on working Niello, a traditional black silver alloy, and she received her Ph.D. in Art History from Antioch College. Now in her mid-90s, she talks precisely and energetically about upcoming exhibitions and new projects such as a “beautifully illustrated” neighborhood newsletter and a library for the Arts Extended archives.

Shirley Woodson was the 2021 Kresge Eminent Artist, Detroit’s major award for artists. In the monograph accompanying the award, Woodson describes the immense impact of joining Arts Extended as a young artist in the late 1950s. “I was suddenly in a professional environment as a Black artist surrounded by other Black artists,” Woodson said. “It was a moment to be cherished. I can still run through the names.” Woodson also took every workshop she could with Dr. Taylor, including ones on collecting and traditional African art, and credits her as a “master educator.”

Woodson was the curator of Arts Extended Gallery from 1965 to the early 1970s when it was located on Broadway Street. During this period, a stop into the gallery became a standard destination for prominent national Black cultural figures such as Langston Hughes and Richard Hunt and returning Detroit artists such as Al Loving and Walter Davis. Since the Arts Extended group’s members were mostly working day jobs, Woodson’s mother, Celia, became the gallery’s manager, allowing weekday opening hours. Celia Woodson was, by all accounts, a naturally gifted businesswoman and salesperson who did much to create a strong collector base for the gallery.

“I was suddenly in a professional environment as a Black artist surrounded by other Black artists,” Woodson said. “It was a moment to be cherished. I can still run through the names.”

In 1974, Woodson was a founding member of the Michigan branch of the National Conference of Artists (NCA) with her husband, Edsel Reid, and five other arts professionals and collectors. They were inspired by the vision of connecting Detroit’s vibrant Black art and activist ecosystem of the time with peer networks in other parts of the country. Now nearly 50 years later, the NCA Michigan is still active, with Woodson remaining central to the project.

Marian Stephens was a couple of years ahead of Shirley Woodson in the art program at Wayne State University and joined Arts Extended immediately after graduating in 1956. Her elder brother Richard Kinney, another significant Detroit artist and later the highly respected Director of Publications at the Getty Museum in Los Angeles, was already a part of the group and “got her in.” Like Taylor and Woodson, Stephens is a highly respected educator who has influenced countless younger artists.

At Cass Tech, Stephens was a mentor to the prominent Detroit artist Sydney James, recognizing her unique talents and even organizing a program of extracurricular study with veteran Detroit muralist Hubert Massey. In conversation, James emphasizes just how important their relationship has been over the years, saying, “Marian Stephens provided me with creative nourishment I didn’t even know I needed at the time. She’s a large part of who I’ve become as an artist.”

James, in turn, has become a mentor to a younger generation of women and transgender artists, including Bakpak Durden, who later this month has a solo exhibition at the Cranbrook Museum of Art, and Ijania Cortez, who has become one of the city’s most sought after muralists. It is a model of unselfishly paying forward what you have received that has resulted in a deep sense of intergenerational community and an ongoing stream of exceptional Detroit artists.

In conversation, Woodson also identifies “community” as a consistent element running through long-term Black art projects like Arts Extended and the NCA, working to keep them consistently relevant and energized. In these projects, community building is not just a philosophy but a deeply-ingrained practice. For example, a recent NCA workshop centered on teaching high school-age artists how to create a portfolio. Leading the workshop were Kresge Art Fellows Senghor Reid and Sabrina Nelson, and Cranbrook MFA candidate Akea Brionne, a remarkably qualified group of teachers and role models willing to devote their weekend to the largely unglamorous task of mentoring the next generation of artists.

Expanding on the background of this phenomenon, Woodson talks about the indefinable “magic of Motown,” meaning an ongoing and specific creative energy that is welcoming, community-based, and intertwined with Detroit’s unique social history.

It is a creative community that is both intergenerational and interdisciplinary. As the Arts Extended project grew, they regularly networked with other equally vibrant art scenes in the city, such as writing, theater, music, and dance. In the 1960s and 1970s, the project formed an especially close relationship with the poet Dudley Randall and the legendary Broadside Press. The visual artists of Arts Extended provided illustrations for Broadside Press’s publications, and Dudley Randall would teach at the workshops and camps that Arts Extended put on for high school students. Poetry readings became a regular feature of the gallery.

In conversation, Dr. Taylor describes how an Arts Extended exhibition titled Call and Response in the David Whitney Building in the 1980s typified many of these relationships. The show’s concept was a call for artists to respond to various “broadsides,” the single-page 8.5 x 11 poems for which the eponymous press was known. Taylor remembers the result being a creative tour-de-force that highlighted a swath of dance, jewelry, visual art, and new poetry in response to the original works.

The David Whitney Building during this period was the center of a vibrant Black, primarily artist-led, gallery scene, which, in addition to Arts Extended Gallery and the NCA, included galleries by George N’Namdi, Olayami Dabls, and others. It is probably no coincidence that the first three Black visual artists to win the Kresge Eminent Artist award (Charles McGee (2008), Shirley Woodson (2021), and Olayami Dabls (2022)) were not only outstanding artists but also all gallerists and educators.

To Woodson, this is not surprising; it merely reflects the culture from which they all emerged. Few commercial galleries or institutions at the time were interested in Black artists. So if you wanted to show your work, you started a gallery. And, if you wanted people to come to see your art, you had to teach them what they’re looking at. And if you wanted to maintain the gallery, you always needed new people, and you associated with those people through common interests, so community building around common cultural goals was inevitably a part of the process.

Listening to Woodson matter-of-factly explain this logic, which could also be the de-facto blueprint for organizations like Arts Extended and the NCA, it all seems perfectly obvious. But this organic approach is not how the mainstream art establishment, with its tight focus on institutional legitimation and high-value collectors and donors, typically operates, so there is something special in the process Woodson describes.

The relationship between the Black art community and Detroit’s art institutions is in a process of transition. For example, in addition to the 2021 Kresge Eminent Artist award, Woodson also had a recent solo exhibition at the Detroit Institute of Arts, something which would have been inconceivable when Arts Extended began in the 1950s.

How this relationship will shake out is still to be seen. But it doesn’t mean the core values of organizations like Arts Extended or the NCA, which combine a fundamental belief in art’s potential to enrich lives with an awareness of the need for Black artists to build long-term, community-centered projects outside the institution, are any less necessary.

Someone who is well-positioned to comment on this is Misha McGlown, the Director at the Irwin House Gallery in Detroit and a recent returnee after two decades in New York. Earlier this year, the gallery hosted a talk that featured Marian Stephens and Shirley Woodson in conversation with Halima Afi Cassells and the writer Nichole M. Christian. The discussion covered many of the themes in this article and was the inspiration for it.

In conversation, McGlown emphasizes the continuing relevance of organizations like Arts Extended. As she says, “Obviously, a lot has changed since 1952, but grassroots institutions where we can incubate, inspire, and learn from each other are no less important than they were a half-century ago.”