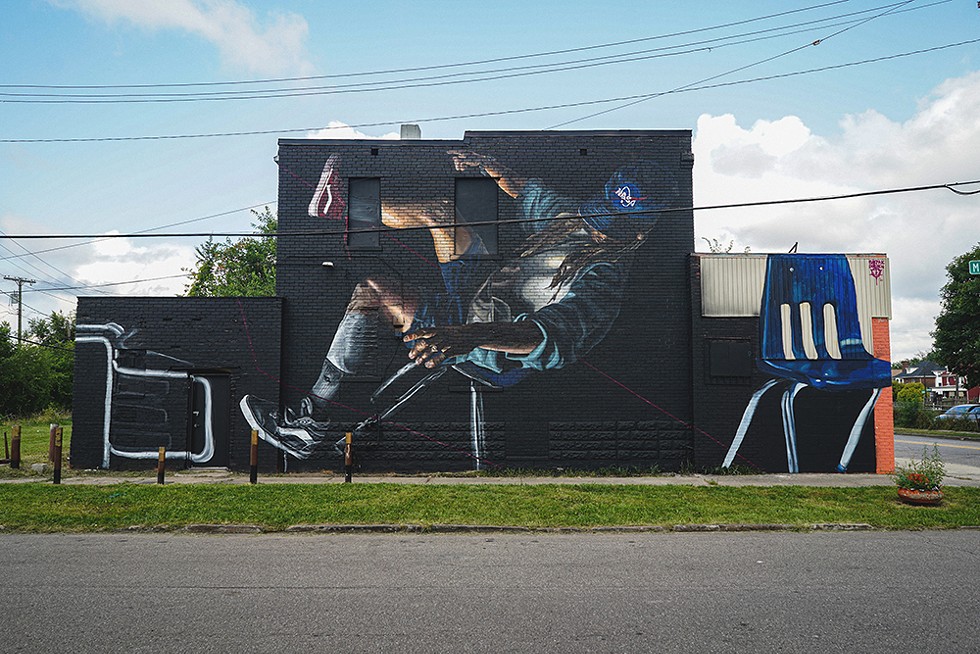 It is common knowledge that body language can say a lot about our day-to-day emotional state. But the body is also an archive; it stores scars and trauma and talks about the life we have lived to this point. In I Feel Like I've Been Here Before, a solo exhibition currently showing at Playground Detroit gallery, painter Bakpak Durden (who uses they/them pronouns) uses their body in combination with a considered selection of inanimate objects to talk about the cyclic nature of their mental health.

The painting "Self Portrait: Control" (2019) shows the artist sitting cross-legged in front of a spinning top. The artist's body is represented by a conventional self-portrait from the chest down. But the spinning top could also be considered a self-portrait, or at least a portrait of a potential trajectory of Durden's emotional state. When the top is spinning with sufficient angular velocity, it is stable and will right itself after minor knocks, but without the input of additional energy, it will slow down to the point where small bumps in the road will cause it to collapse and fall. 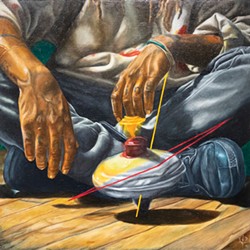 Durden's trademark visual motif is to divide symbolically important objects using a triangular plane. One side of the plane is shown in color; the other side is in black and white. The colored side indicates life when everything is spinning along happily. The black and white side represents life where everything is accelerating away into the darkness of depression. Just like the spinning top, there is no gradual transition; life is either running smoothly or falling out of control.

Durden's body language in the painting is relaxed to the point of being almost limp. According to the artist, this lack of tension could signify a feeling of resignation or a reassuring acceptance of the cyclic nature of their emotional state. Tellingly, one of the pieces in the show is called "Hope/less." The hands in the painting are interesting, telling the story of someone who has been through a lot in their thirty years.

"Loud Swirl" (2021) is a significant work in the exhibition. The background is Durden's studio of the time, a form of self-portrait that they refer to as "organized chaos." The triangular plane transects the floor, the very foundation of this self. Off to the side is a backpack, another subtle self-portrait. Two images of a cat are superimposed, a cinematic effect that implies movement through space and time by compressing two moments into a single frame. As with all of Durden's works, there is the sense that the space portrayed is simultaneously a physical one and a dynamic psychological one. 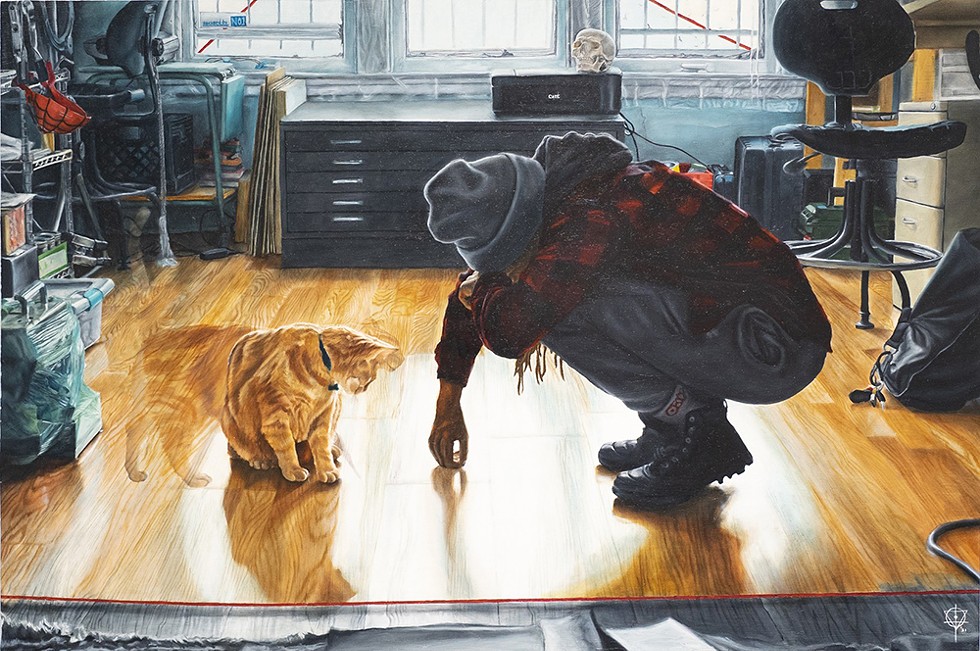 Durden's exhibition arrives during a time when Black figurative painting in Detroit is enjoying a sustained period of exposure. For example, this summer, the painter Mario Moore had a major early-career survey at the Charles H. Wright Museum of African American History. And last month, the Detroit Institute of Arts announced it had acquired "White on White: Stone Mountain" (2019), a six-foot by ten-foot painting by Tylonn J Sawyer.

There has also been significant activity in the city's commercial galleries. In addition to Durden's current solo exhibition at Playground Detroit, Mario Moore has exhibited at David Klein Gallery, Moore's "mentor and teacher" Richard Lewis had a recent show at Gallery Camille, Sydney James and (drawer and printmaker) Rashaun Rucker have exhibited at M Contemporary in Ferndale, and Tylonn Sawyer has exhibited extensively at N'Namdi Center for Contemporary Art. 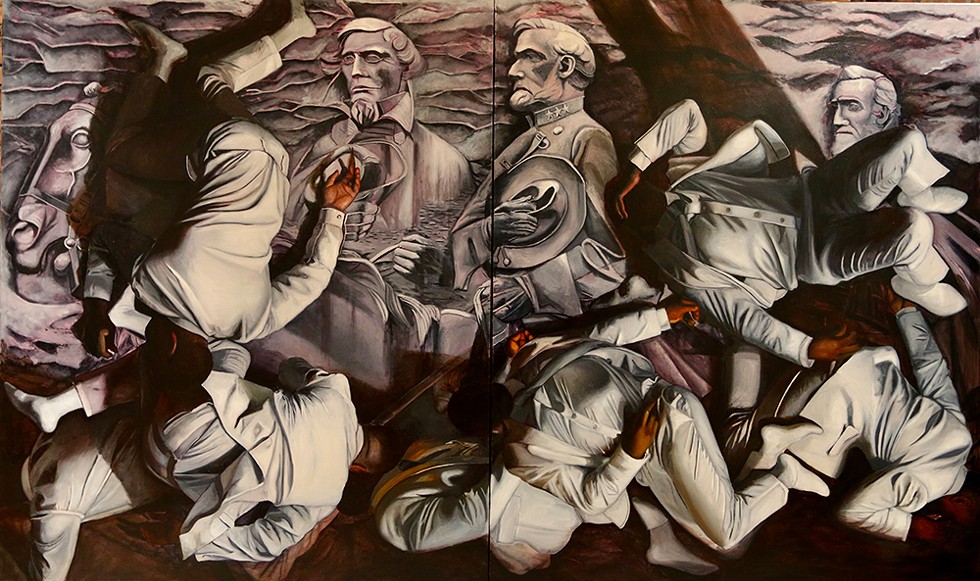 As with Durden, these artists frequently combine their formidable technical proficiency with the use of the body as a surrogate for broader social issues. In commenting on Sawyer's recent work, Valerie Mercer, curator and head of the DIA's Center for African American Art, speaks of the painting "invoking the anxiety of being Black in America," given the country's racist history and present.

Another significant art community for Durden has centered around mural painting. There is considerable overlap between Black figurative painting and mural painting in Detroit, with several artists having one foot in each practice. Both approaches have their advantages. The route to institutional acceptance and collectors is through the gallery system. But public art allows for the development of a more inclusive audience and, through commissions, can provide a degree of financial stability that is rare for artists in the Detroit art world. 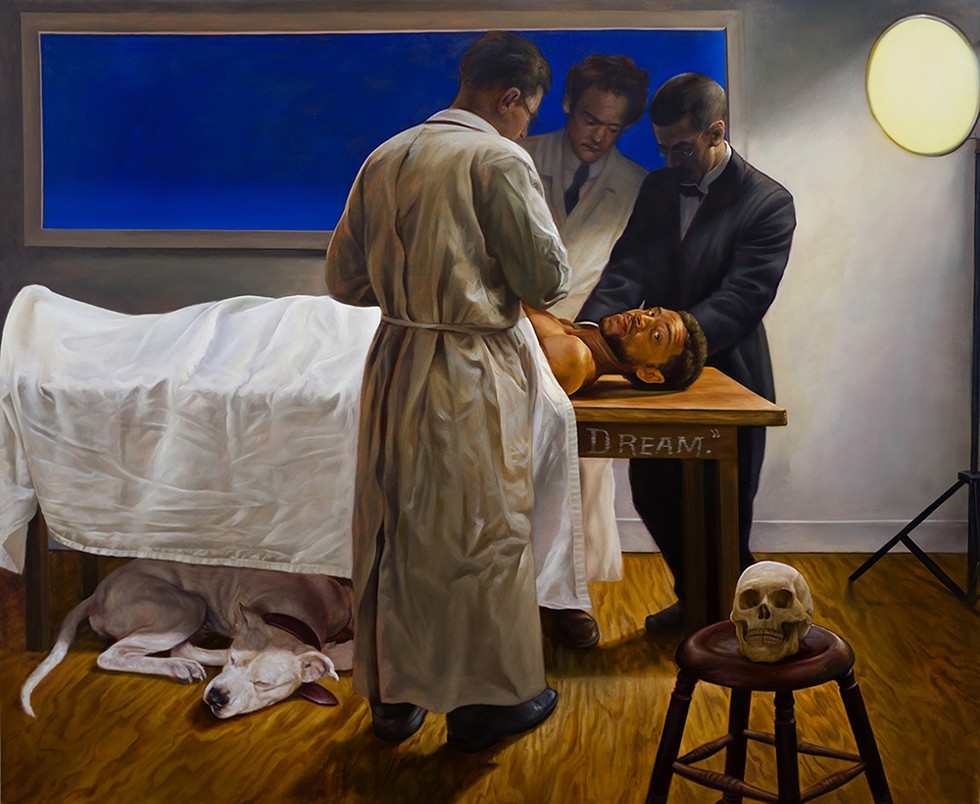 This interaction between mural painting and Black figurative art has helped Durden's development enormously. The scale of mural painting means that it is often inherently collaborative, as when Durden worked with the more established artist Mario Moore on a stunning mural at Zussman Park in the Davison/Dexter area. And even more critical has been their relationship to painter Sydney James, who has played the role of a mentor to the younger artist.

A remarkable feature of Durden's emergence in the Detroit art world is that they only started painting in 2018. Before that, they were drawing prolifically and sometimes acting as an assistant to muralists such as James and Ellen Rutt. But it was James's invitation to participate in a multi-artist mural painting project she was leading at a railway viaduct at Brush and Baltimore that changed Durden's life. 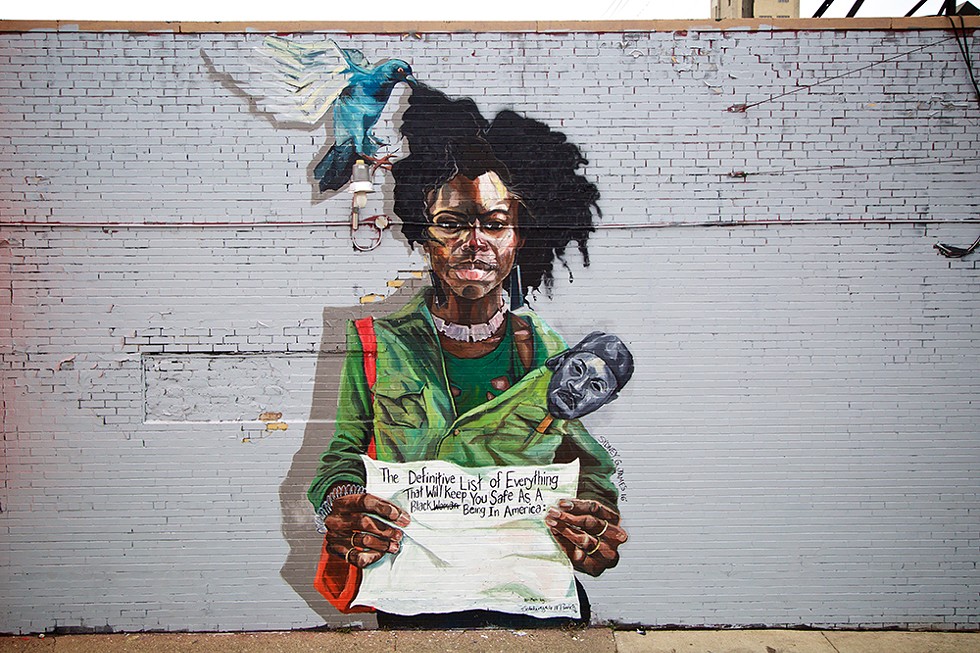 "Black List" by Sydney G. James (2016); wall painting, 15 x 25 feet; Eastern Market, Division and Orleans. The mask and the pigeon are references to the visual languages of artists Tylonn Sawyer and Rashaun Rucker, respectively. The words are by poet Scheherazade Washington Parrish. All three are James's friends and frequent collaborators.

James's assignment to the artists, which in addition to Durden included Ijania Cortez, A M Scout, and Lindy Shrewbridge, was to paint a self-portrait. Characteristically, Durden painted multiple self-portraits. The more prominent one shows a figure (presumably Durden) lying horizontally on the sidewalk, head resting on a yellow backpack. A "secret" one, which is only visible when you travel in the wrong direction along the one-way street, is of an oversized hidden backpack. What is striking about these first paintings is how fully-formed Durden's painterly technique and visual language emerged under James's tutelage.

James is an established mural painter known for iconic images such as "Black List" (2016) in Eastern Market and the massive "Girl With the D Earring" (2021) on East Grand Boulevard. She leverages relatively lucrative commissions to pursue more selfless ventures like her mentorship of artists like Durden and Cortez and, even more extraordinarily, the massive BLKOUT Walls mural festival that she organized in the summer of 2021.

BLKOUT Walls saw a large gathering of artists from Detroit and further afield paint approximately 40 walls in Detroit's North End and Milwaukee Junction neighborhoods over seven days in July. James's motivations for putting on the festival included establishing a precedent for a mural festival in Detroit that pays artists, and assembling a group of artists that reflected the city's demographics; 75% of the participating artists were Black or other artists of color. 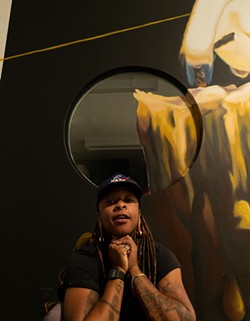 Courtesy of the artist
Bakpak Durden.

The common thread between James's organization of BLKOUT Walls and her mentorship of younger female and transgender artists such as Durden is that both projects address racial, gender, and economic injustice in the Detroit art world. Many people talk about these issues, whether sincerely or hypocritically, but James takes action to change things.

Evocative of Ingenuity, Durden's spectacular piece for BLKOUT shows them seeming to fall with an overturning chair. A NASA baseball cap hides the artist's face as they appear to start their descent to earth. Actually, Durden painted the work from a photo of themselves finding the exact tipping point, right on the verge of falling but staying in equilibrium. As with the spinning top painting, it might say something about the possibility of emotional collapse, but in comparison to the earlier piece, it also holds the potential to come from a place of play, joy, and recovery.

The mural is also something of an artistic coming-of-age piece for Durden. As James says, mural painting is a "level playing field," meaning that the general public only sees the painting and typically knows nothing about the artist's reputation. "Evocative of Ingenuity" holds up to the very best of the pieces painted in the festival and seems likely to have passers-by on Clay stopping in their tracks to absorb it for years to come.

Durden's hands again figure prominently in the mural. The left hand, especially, reaches out from the plane of the wall into the light and towards the viewer. In an email, fellow artist Mario Moore comments on Durden's compositional use of the hand, saying, "The hand becomes really important in the work that Bakpak makes, reaching, holding, embracing and ultimately I think inviting the viewer to experience their world."

I Feel Like I've Been Here Before is on display at Playground Detroit Gallery at 2845 Gratiot Ave. through Dec 17. Contact [email protected] for hours or to schedule an appointment. You can read more about many of the artists featured in this article and other similar artists at essayd.org.