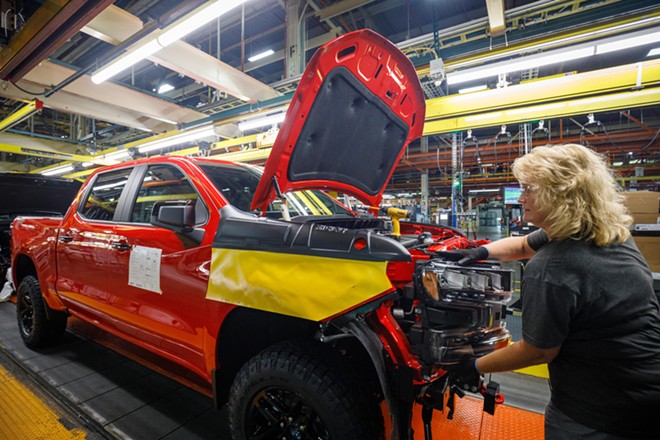 General Motors is having trouble finding employees for two of its busiest assembly plants.

While finding employees is an issue plaguing many businesses, UAW officials for GM’s Flint and Fort Wayne plants believe the solution is quite simple — stop testing for marijuana, and raise the starting wage.

UAW Local 598 Shop Chairman Eric Welter told the Detroit Free Press he believes that marijuana testing is a deterrent and many applicants don’t return after finding out about the mandatory testing.

"When you have a line of people waiting for a job, then it's OK to test for it," Welter told the Detroit Free Press. "But if you don’t have enough candidates, testing for marijuana might turn people off from applying."

Michigan voters approved cannabis use for medicinal purposes in 2008 and for recreational use for adults age 21 and older in 2018.

GM conducts hair follicle tests on its potential employees, which unlike a urine sample, can detect marijuana dating back several weeks. While the strand test was once considered a foolproof testing method for marijuana use, the current laws surrounding hemp and cannabis could disrupt testing accuracy.

Plus, CBD products, which don't get you high, are legal in the state of Michigan and available at many retail establishments. A 2012 study in the Journal of Analytical Toxicology found that CBD can produce a false positive for THC. Not only does strand testing weed out otherwise qualified candidates, it could disqualify innocent ones.

While drug testing serves as a detractor, the company’s starting wage of $16.67 may also turn off many applicants. Rich LeTourneau, shop chairman at GM’s Fort Wayne Assembly, told the Detroit Free Press the recent increase in pay at other establishments has made GM look less appealing to applicants. LeTourneau says an increase in wages would help draw people to apply.

“What really needs to happen is lift that $16.67 cap and hire them in at $18, LeTourneau told the Detroit Free Press. “Pizza Hut is paying $20 an hour to deliver pizza here.”

Though GM has continued to set up job fairs and promote employment opportunities online, they have not commented on the union’s ideas to appeal to more applicants. GM Spokesperson Dan Flores told the Free Press the issues were being discussed internally.

Born and raised on Detroit's Westside, Alex Washington is about as Detroit as they come. She judges your coney island order and serves a mean side-eye when anything across Eight Mile is called "Detroit." Her writing has been published in Real Detroit Weekly, The Detroit Free Press, Model D, BLAC magazine, and...
More
Scroll to read more One Hitters articles
Join the Metro Times Press Club