An end to couch-lock 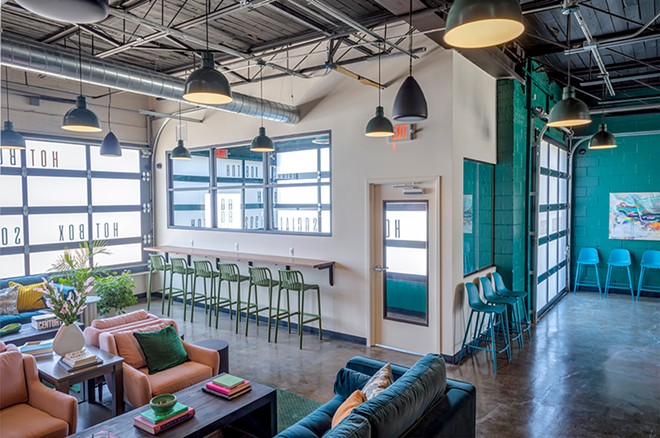 Michigan’s adult-use cannabis laws that went into effect in 2019 allow for consumption lounge licenses, or public spaces where you’re allowed to get high, though we haven’t seen any yet — that is, until now. Last month, Hot Box Social in Hazel Park became the state’s first officially licensed cannabis consumption lounge.

Sure, you could always do what people have always done, which is get high at home, or discreetly, like while taking a secluded walk. But smoking cannabis in public is frowned upon, and it’s explicitly illegal at cannabis dispensaries, so you can’t try before you buy.

Of course, the pandemic put a pause on indoor gathering for the past two years, making consumption lounges a low priority in an otherwise booming industry. But Nowfal Akash, chief information officer of Hot Box Social’s parent company Trucenta, says it was also a matter of the right conditions lining up. For Hot Box Social, that was the pot-friendly culture in Hazel Park.

“I think Hazel Park’s on the front line, not just in cannabis, but just being progressive in general,” Akash says, pointing out that the suburban community’s voters approved of Proposal 1, which legalized cannabis for adult use, by 75.1% — one of the highest shows of support in the state.

And it’s not just pot that Hazel Park residents are open-minded about. Last month, its City Council voted unanimously to decriminalize psilocybin or “magic” mushrooms and so-called “entheogenic” plants known for producing psychedelic effects, like peyote and DMT — becoming the third municipality in Michigan to do so after nn Arbor and Detroit.

“When you have a city that has alignment with the administration, the council, and the community, I think you see things happening like you do there,” Akash says, adding, “We’re excited to be to be the first to be licensed in the state of Michigan, and to give Hazel Park that title.”

Hot Box Social is located at 23610 John R Rd., a drag that features a number of cannabis dispensaries and other related businesses. That includes B.D.T., an old-school head shop that sells bongs, tie-dye T-shirts, and other paraphernalia that set up shop there in the late ’70s.

Akash says the Hot Box Social building previously housed several different businesses, most recently a former lawn maintenance garage. The backyard was basically a scrapyard, he says, and the company is now in the process of cleaning it up and building an outdoor atrium.

“I think it’s probably factual that if we would have [demolished] it and rebuilt it, it would have cost us a lot less and we would have got it done a lot faster,” he says. “But we were trying to preserve some history.”

He adds, “We did give it more of that garage-y feel, that industrial feel. I think it integrates well with the city, and also works well with the culture and the vibe. The color scheme is very That ’70s Show-ish.”

The 3,000-square-foot space is painted green and has a number of couches and high-tops. Akash says the furniture can be easily reconfigured to accommodate a variety of events. The space also includes a 5,000-square-foot patio.

Akash primarily sees Hot Box Social as an educational opportunity for customers to try new products. While the law allows for consumption lounges to let their guests bring their own weed, Akash says Hot Box Social will partner with Breeze, a nearby dispensary that Trucenta also owns, to provide cannabis to the site.

Akash thinks consumption lounges that are partnered with dispensaries is the model moving forward.

“These are completely necessary in our ecosystem,” he says. “I mean, when you talk about the only place you can legally smoke is your home — you can’t drive, you can’t do it in public, you can’t do it in an apartment — so if you’re going to provide a safe product, you need safe access to consume it.”

The venue has hosted a few small events already, Akash says. “In terms of types of people, we’ve already experienced the full spectrum, from people wearing suits all the way down to people wearing Converse,” he says. “I think the cannabis community is diverse, and there’s no limitations. We’re in a position to welcome any and all that are looking to have a good time and do it in a safe way.”

Akash says Hot Box Social is also trying to connect with rideshare services like Uber and Lyft to give customers a safe ride home.

He adds, “I think it’s going to be everybody from the canna-curious to the experts. There’s a full spectrum, and we’re going to have staff there to educate and hold people’s hands if necessary, or just kind of stay out of the way let people do their thing.”

He says he hopes to open up to the public in the summer, and envisions Hot Box Social as hosting everything from ticketed comedy performances to corporate retreats. They’re already getting requests to host cannabis-infused weddings and birthday parties, he says.

There are talks of opening other consumption lounges around the state.

“There were a lot of cities’ mayors and council [members] that came through a couple of the fundraising events that we had there last week or the week before, and they are all very excited to start talks about potentially having these in their cities,” he says. “As more cities opt-in, and more opportunities open up, I think there’s definitely a discussion to look at expanding in the right city.”

He adds, “I think these things are necessary, and as time goes on, and as cities kind of see how these things actually operate, I think there’ll be a lot more open to allowing more of these.”

Though it has not opened any consumption lounges yet, the company is actively looking for a partner to enter the Michigan market, he says, with eyes on the Ann Arbor or Detroit areas.

“We’ve got to get one open, and then things will explode for us on the franchising side,” he predicts.

The company is also looking at opening in other states with varying degrees of cannabis laws, including California, Nevada, Colorado, Washington, Florida, New York, New Jersey, and Illinois.

Silberstein says the company envisions more of a gym membership model. “We didn’t want to be like a Starbucks where you could buy a $3 cup of coffee and spend all day in there and turn it into your office,” he says. “Dispensary owners who will say they don’t understand how a consumption lounge can make any money, well, we’ve got a model that makes a lot of money, and part of that is we have multiple revenue streams.” Those various revenue streams could be monthly or annual memberships, in addition to one-time door fees for non-members. The company would partner with cannabis brands to provide retail products, he says, as well as restaurants to offer food and beverages.

The idea of a national cannabis consumption lounge chain might not be all that far-fetched. Earlier this month, the U.S. House passed the Marijuana Opportunity, Reinvestment, and Expungement (MORE) Act, which would decriminalize cannabis at the federal level and also expunge or resentence incarcerated people with cannabis-related criminal records. It was only the second time in 50 years that Congress has considered ending cannabis prohibition. A similar measure passed the House in 2020 only to languish in the Republican-controlled Senate. While the new Senate has signaled a willingness to prioritize legalizing pot, the Democrats only have a slim majority, so it’s unclear whether it will actually finally happen anytime soon.

But legalizing cannabis at the federal level would help a chain like Bud’s Place, allowing for interstate transport and banking.

Silberstein says he believes it’s only a matter of time.

“Basically, it’s an opportunity to get in on the ground floor of a whole new industry that is going to be huge,” he says.

Sure, people could just get high at home. You can also drink alcohol at home.

“All you’ve got to do is look at the bar industry,” he says. “You pay a lot less to buy it at a store and drink it at home than you do at buying your drinks in a bar and drinking in a bar. But there are more than 60,000 bars in the U.S. And that’s where cannabis is headed.”

The 4/20 issue: Our favorite holiday is here