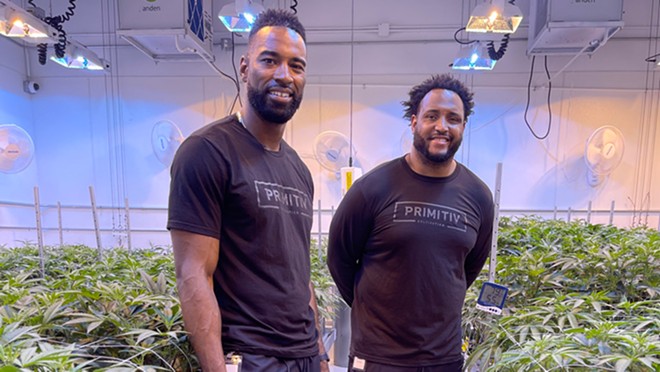 Primitiv, the cannabis brand founded by former Detroit Lions players Calvin Johnson and Rob Sims, has announced the opening of its flagship dispensary in Niles, Michigan.

Located at 1286 S. 11th St., Primitiv will not only sell its own cannabis products, but will also carry other Michigan-based cannabis brands as well, such as Hyman Cannabis, Pleasantrees, and White Boy Rick's The 8th.

“This is a project of passion that we have been cultivating for the past several years and we couldn’t be more excited to see it become a reality,” said Sims in a press release. “We’ve made Michigan our home and have been blessed by the support we have received from our community and feel this is a great way to further plant roots and give back to the communities that have embraced us.”

The dispensary also carries branded merchandise, which Primitiv is currently developing custom merchandise like jerseys, footballs, trading cards, and helmets to be sold later this year.

The dispensary is licensed for adult-use, so anyone age 21 or older with a valid ID can enter.

The former players began Primitiv after both used marijuana-based medicine as an alternative to opioid-based prescriptions while playing football. Post-retirement, the players began to explore the cannabis industry for its healing properties, and work to destigmatize cannabis as it relates to athletes.

“We’ve seen so many of our brothers from around the league turn to other forms of pain relief just to get through the game, day, or season,” Johnson said in a press release. “We believe in the holistic properties of cannabis as an all-natural, plant-based option not just for athletes but for anyone looking for physical or mental relief. We’ve just scratched the surface in our innovation process and are looking forward to more news to share later this year.”

Born and raised on Detroit's Westside, Alex Washington is about as Detroit as they come. She judges your coney island order and serves a mean side-eye when anything across Eight Mile is called "Detroit." Her writing has been published in Real Detroit Weekly, The Detroit Free Press, Model D, BLAC magazine, and...
More
Scroll to read more Canna-Business articles
Join the Metro Times Press Club