Unfurled: Supports/Surfaces to bring art inspired by the Paris riots to MOCAD

“The French are bored,” Le Monde, France’s leading newspapers, proclaimed in March 1968. The French were bored, according to Le Monde, because they had not lent their participation in the protests that had engulfed the rest of the world. Bored because their youth had provided them with a faulty moral compass, which absolved them of their civic duties unlike their counterparts in Spain or Italy. Bored further because they had deserted those worldly principles that were inspiring youth protests across seas in Japan and the United States.


Six weeks after the reprimanding, students occupied Sorbonne University in Paris and ignited massive and transformative protests throughout the country. The May 1968 protests, referred to simply as Mai 68, spread to French universities, and eventually, millions of labor workers. The French economy was paralyzed.

Out of the revolution came a foundation for the impending sexual revolution and women’s movement in France. Workers, too, shared in the success of the protests in the form of better working conditions and higher wages.

“The feeling we had in those days, which has shaped my entire life really, was: We’re making history. An exalted feeling - suddenly we became agents in world history,” wrote Daniel Cohn-Bendit, a student leader during the unrest, in The New York Review of Books on Mai 68’s 50th anniversary.

Almost a year prior, the chaos that struck Paris had unfolded in the streets of Detroit. The Detroit riots in July 1967, one of the most violent and destructive riots in United States history, erupted under different and more entrenched evils than those in Paris: police brutality, racial profiling, and the pernicious neglect driving up black unemployment and maintaining segregation in housing and schools.

It fits then that Unfurled: Supports/Surfaces 1966-1976, a showing of the French art movement born out of the unrest, will present its first exhibition in the Midwest in the city of Detroit at the Museum of Contemporary Arts Detroit (MOCAD).

Supports/Surfaces was a group of twelve artists that came together in southern France in the late 1960s. The political climate inspired the group to use new forms and methods to reflect the counter-institutional times.

They purposefully displayed their art outside of Parisian galleries, opting instead for river banks and bars in the small towns in the south. 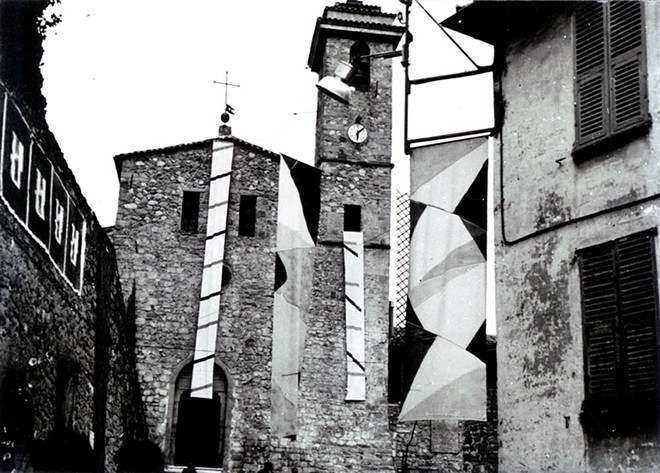 “Developed during the French political turmoil of the late 1960s, this movement saw a handful of leftist artists explore the same complexities as their American Minimalist peers, questioning the standard procedures linked to painting,” said Hervé Ferrage, the Deputy Cultural Counselor of the French Embassy.

“We’re thrilled to see that this short-lived movement is finally getting today some deserved attention across the Atlantic,” Ferrage said.

Half a century after rebellions brought their respective cities to a halt, Paris Detroit will meet at MOCAD in February 2019.