Will the real Romney please stand up? 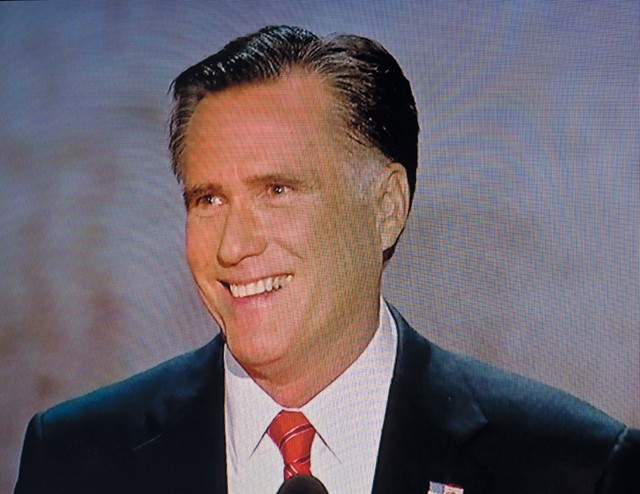 Mitt Romney during his convention speech: "I wish President Obama had succeeded

Fidel Castro is old and sick and dying, but you have to think Mitt Romney's convention speech gave the old bearded devil a boost.

Mittney went out of his way to attack "Castro's tyranny" and "Castro's Cuba" twice. Who says the GOP has changed?

They are still stoutly against Fidel, God love 'em. Talk about nostalgia! Richard Nixon took his share of whacks at Castro when he was running for president ... back in 1960. I won't live to see it, but I devoutly hope that whoever runs in 2060 attacks Castro too.

He may be, by then, the last thing holding this nation together,

Anyway, I very much enjoyed watching snatches of the Republican National Convention, especially the very end, when they brought out a red, white and blue robot mannequin who gave what, I take it, was supposed to be a simulation of Romney speaking.

He attempted to channel Ronald Reagan. He asked God to bless poor dead Neil Armstrong, compared President Obama to Jimmy Carter, and told a bunch of fairy tales about himself and his country, which sounded like a very nice place for religious multimillionaires.

Once, and only once, he let slip a line that showed what sort of vision Romney and Paul Ryan have for the rest of us:

"... when you lost that job that paid $22.50 an hour with benefits, you took two jobs at nine bucks an hour and fewer benefits ... you did it because it was what you had to do."

Get ready for a lot more of that, comrades. Romney, of course, blamed Barack Obama for all of this in sorrow more than anger, of course. His acceptance speech last week probably disappointed many of the birthers and virulent, angry nut jobs who have hated Barack Obama from Day 1 because he is black.

Anyone with a memory longer than Rush Limbaugh's belt had to be cracking up when Romney said, "I wish President Obama had succeeded because I want America to succeed. But his promises gave way to disappointment and division." No doubt there.

That is, the Republicans were very disappointed that they'd lost the election, and wanted Obama to fail. Rush himself said so in February 2009. "The dirty little secret is that every Republican in the country wants Obama to fail, but none of them have the guts to say so." Except for the world's most overpaid radio ranter himself.

Romney got the nomination by pretending to be a right-wing lunatic. He knows, however, that won't work if he wants to win the general election, and that he has to appear more moderate.

Running for the U.S. Senate nearly 20 years ago, and then for governor of Massachusetts, Romney knew he had to appear to be socially liberal. He got creamed by Teddy Kennedy anyway, but then got himself elected governor.

He served only a single term, and prudently did not try to run for re-election. But while on the job, he pushed through a health care plan that is pretty much the spitting image of "Obamacare."

Five years ago, the only time I've ever interviewed Mitt Romney at length, he was still quite proud of what he called "a new paradigm in health care."

"I am not looking for the federal government to take over health care; rather, to make it work more like a private market," he said.

His vision seemed to be for the federal government to lean on the states to have them all enact their own versions of Romneycare. "There's no question in my mind that we can get every citizen insured in this country," Romney said. "And other states will take it further and do it even better, I hope, and we'll learn from each other. It's a new paradigm in health care," he said enthusiastically.

That was, naturally, before President Obama did it, at which point it became socialism. I interviewed Mitt during his first run for president, a nomination he would eventually lose to John McCain. By then, he had pretty much shed all his former liberal social attitudes.

When I asked him about flip-flopping on issues, he said something very telling. Basically, he said issues didn't matter much. "If you look back at the history of the country, the issues people campaigned on generally turned out to be quite different from the issues that defined their presidency.

"More important than their view on particular issues is their character and their capability and their vision and their leadership skills. That's [how] the great presidents were tested and succeeded."

Confidence is something any president needs. But Mitt Romney clearly thinks he is the brightest guy in any room he has ever been in. My guess is that he is happy to say whatever any particular group of slugs wants him to say, if it will help him achieve power.

Paul Ryan, the Ayn Rand reader who sees himself as the architect hired to demolish the welfare state, is just as arrogant with less excuse. Both men were born well-off and became richer, or as the late Texas Gov. Ann Richards would have said, were born on third base and concluded they had hit a triple, if not built the stadium.

After Ryan spoke, I got a call from an elderly medical doctor named Stan Levy. He was livid. "This guy grows up with a lawyer for a father in a small town in Wisconsin and thinks some poor black kid in Detroit, with the legacy of slavery, can make it on his own."

Levy, by the way, is a millionaire himself, largely from practicing medicine, but realizes he didn't "build it on his own."

Nine weeks from now, we'll be granted a chance to vote for the two übermenschen oops supermen of the Republican Party.

Don't know about you, but I can hardly wait.

Life at the Detroit Free Press: The other day, I ran into an excited Oneita Jackson in a downtown bookstore. A few years ago, her O Street blog and column provided one of the most original and interesting voices in the newspaper. Then, it disappeared.

Oneita was caught doing something, in the words of editorial page editor Stephen Henderson, that "completely contravened the values of this newspaper. She also tarnished her own efforts on Detroit's behalf," he intoned gravely.

When I read that, I thought she must have poisoned the reservoir for sure, or worse, given money to the Republicans.

But no. What she did was ready for this? write her name with a felt pen on a bench on the new Bagley Street Bridge. Within days it rained, and her name was washed away. But no matter.

She had somehow insulted Comrade Stalin oops Gannett. Corporate Guardian of Ideological Purity Henderson intoned: "When she returns, she'll have work to do rebuilding some of the trust and community she has enjoyed with her followers."

So I wasn't too surprised to learn that Jackson soon decided she didn't want to write the column or the blog anymore. She was given a behind-the scenes job as a minor editor, and disappeared from view.

Till last week, when I found her bubbling over with excitement. Two weeks ago, she quit the Free Press, and is embarking on a career that may offer her far more intellectual satisfaction.

She's going to be driving a cab on Detroit's mean streets.

Bettering herself? I asked. Oneita agreed, beaming. And why not? To anyone who knows what's going on with today's newspapers, it ought to be perfectly clear that she certainly has.