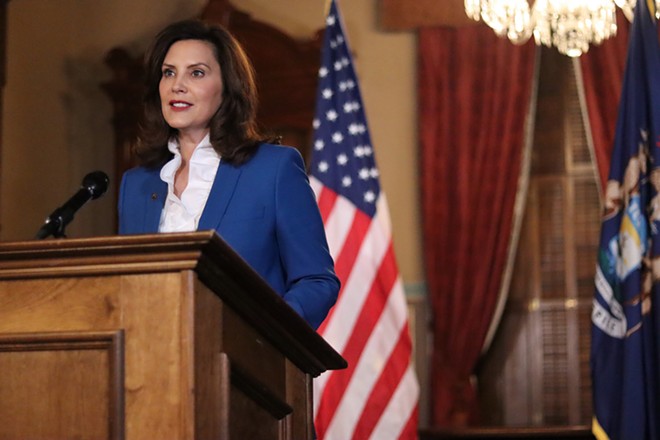 This story was updated with information on the Dixon campaign’s law enforcement endorsements.

One of the largest police organizations in Michigan officially endorsed Gov. Gretchen Whitmer for another term on Wednesday, a significant blow to her Republican opponent Tudor Dixon, who paints herself as the law-and-order candidate.

The endorsement from the Michigan Association of Police Organizations (MAPO), which represents more than 10,000 law enforcement employees, comes as Dixon tries to cast Whitmer as an out-of-touch, anti-police liberal.

Though Dixon has been endorsed by the Police Officers Association of Michigan, which represents more than 12,000 officers, and has also been endorsed by 22 bipartisan county sheriffs, Whitmer earned the endorsement for increasing the budget for local and state police and stepping up funding for recruiting and training officers.

“We are proud to endorse Governor Whitmer for re-election,” Robert Figurski, President of the Michigan Association of Police Organizations, said in a statement. “She understands that the men and women of law enforcement have a very difficult job and she is committed to supporting our members with resources, not just rhetoric. We look forward to working with Governor Whitmer to make Michigan a safer place.”

Whitmer was also endorsed by the National Troopers Coalition and the Detroit Police Lieutenants and Sergeants Association.

Despite Dixon’s “tough-on-crime” rhetoric, she has come under fire for proposing to phase out the state’s individual income tax, which funds the state police budget. The tax accounts for about 16% of the state’s overall budget.

In 2017, the Michigan Association of Police Organizations blasted a Republican House bill that would have eliminated the income tax, saying it would have “a devastating impact on police department budgets at the state and local levels.”

Dixon has repeatedly criticized Whitmer for saying in 2020 that she supported the “spirit” of the defunding police movement. But in reality, the movement was about criticizing police brutality and reprioritizing resources, not stripping police of their budgets.

On Tuesday, Dixon unveiled a $1 billion plan to fund police and pubic safety, but failed to say how she’d fund it.

Dixon also continuously claims that Whitmer is responsible for the state’s “violent crime wave,” though the governor has increased local and state police funding.

“I am committed to supporting law enforcement with the tools they need to keep Michiganders safe,” Whitmer said in a statement Wednesday. “By bringing people together, we have been able to increase funding for training and professional development, make investments to hire more officers, and boost revenue sharing for local law enforcement after years of cuts. I look forward to working together to build on this progress to keep Michiganders safe.”