There are an estimated 400,000 deaf people in Michigan, which means the program potentially affects one out of every 20 people in the state 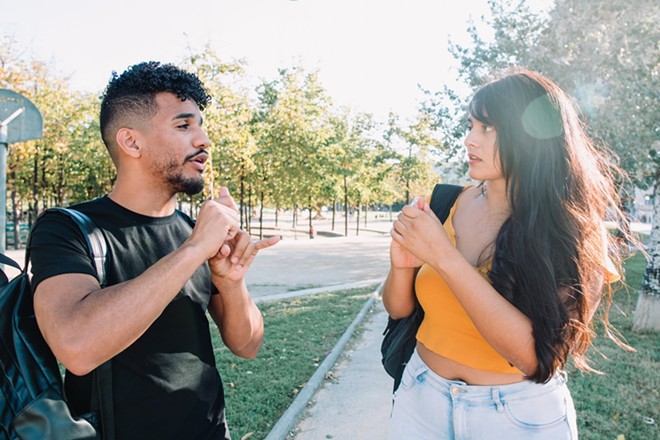 Shutterstock
Wayne State University's College of Education recently included a Deaf Studies minor in its curriculum, and the classes are filling up.

Deaf people say they sometimes feel like they're living on a different planet from those who can hear, but when both learn to use American Sign Language, it can open up a new world of communication.

In Detroit, Wayne State University is taking notice. The school's College of Education recently included a Deaf Studies minor in its curriculum, and the classes are filling up. As the program grows, the school is actively recruiting people who are deaf or hard of hearing as teachers.

Kathryn Roberts, interim assistant dean of teacher education at Wayne State, said it would not make sense to teach ASL without instructors from the deaf culture.

"It was really important to our division that we had people from the deaf community working with us, because deaf culture is a huge piece of what we wanted to be teaching," Roberts explained. "And education programs, particularly Wayne State's education program, we have a huge focus on the community."

Roberts added there are an estimated 400,000 deaf people in Michigan, which means the program potentially affects one out of every 20 people in the state. She pointed out the college offered eight sections in ASL this past semester, and expects the program to expand as demand increases.

Emily Jo Noschese, assistant professor of bilingual and bicultural education at Wayne State University, was one of the first instructors the school recruited. Noschase, who is fourth-generation deaf, not only teaches ASL, but has helped identify and hire five part-time ASL instructors.

Noschese, who spoke in sign language through an interpreter, said there's value in communicating with those who cannot hear.

"Anybody that's working in a business, somebody who might own a business or a company, they are guaranteed to have a deaf person that might want to come in and work for them," Noschese emphasized. "They learn sign language; that could benefit the rapport between them and the client, because they will be able to communicate with them."

Noschese stressed part of learning ASL is understanding the ways of the "deaf culture," because they sometimes express themselves in very different ways from the hearing population.

"We are very blunt and direct. That's a cultural norm of deaf people," Noschese stated. "There's no wishy-washy. There's no sensitivity, beating around the bush, around a certain topic that we might care about. So, hearing people sometimes are a little bit thrown off about that."