Originally published at 6:39 p.m. on Wednesday, April 13. This story was updated with additional details.

Video footage released Wednesday showed a Grand Rapids cop fatally shot a Black man in the back of the head after a traffic stop over an unregistered license plate on April 4.

The death of 26-year-old Patrick Lyoya has led to protests after the family described the shooting as “execution-style.”

One of the videos appeared to show a struggle between Lyoya and the officer over the cop’s stun gun.

“Let go of the Taser,” the officer yelled while he’s on top of Lyoya, who was on his stomach.

Moments later, the unidentified officer shot Lyoya in the back of the head.

The only weapons at the scene were the officer’s stun gun and firearm.

The traffic stop began at 8:11 a.m., when the officer spotted a car with a mismatched license plate. After stopping, Lyoya got out of his car and refused the officer’s commands to get back in.

“Dude, I’m stopping you,” the officer says. “Do you have a drivers license? Do you speak English?”

The officer's body cam shut off moments before the shooting. Police said it was accidentally turned off during the scuffle.

The only video footage of the shooting was taken with a shaky cell phone by a passenger in Lyoya's car.

Many questions were unanswered during the press conference, including why the officer, who was patrolling alone, tackled Lyoya over a misdemeanor offense.

Grand Rapids Police Chief Eric Winstrom declined to draw any conclusions about the officer’s actions, saying the shooting is still under investigation by Michigan State Police and the Kent County Prosecutor’s Office.

Since the shooting, Winstrom began requiring police to patrol in pairs.

Brandon Davis, director of oversight and public accountability for the city, acknowledged that many in the community are upset by the shooting.

“The loss of life is always tragic, and given the history of our country, when the life, particularly of a Black man, is lost in an interaction with law enforcement, there is a great deal of emotion, frustration and anger,” Davis said.

“The video was painful to watch,” Washington, who is Black, said.

Minutes after the press conference was over, Gov. Gretchen Whitmer and Lt. Gov. Garlin Gilchrist issued a statement, saying they spoke with Lyoya’s family.

“I am heartbroken by what we all have witnessed as a father, public servant, and a Black man,” Gilchrist said. “People are frustrated and hurting—searching for answers. Black people in Grand Rapids, in Michigan, and across the country are mentally, emotionally, and physically exhausted from generations of struggle. Yet we press on.”

Gilchrist and Whitmer urged the community to keep protests peaceful.

“When we demonstrate and make our voices heard, we must do so in a way that lifts our call for justice beyond the deepening the pain of this community,” Gilchrist said. “We must never cease our efforts to reverse inequities, create systemic change, and guarantee justice for communities of color. We must recommit ourselves, through our words and deeds, to working together to build a more perfect union and a Michigan with equality and justice for all, where every interaction within our community, especially those with law enforcement, end with everyone able to return home to their families without harm.” 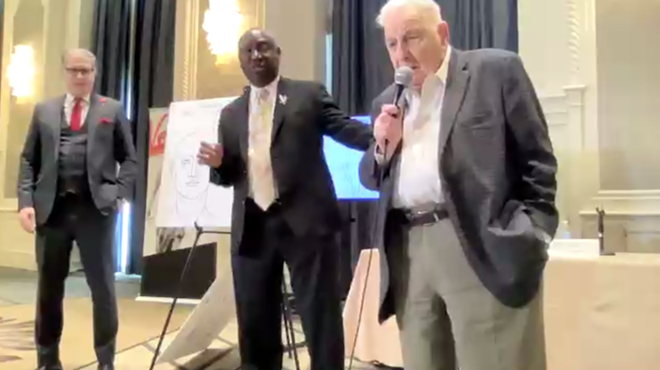 ‘There is no question what killed this young man,’ says renowned forensic pathologist of Patrick Lyoya, Black man shot by Grand Rapids cop: Results of independent autopsy revealed in Detroit


Lyoya and his parents immigrated to the U.S. in 2014, among a growing number of refugees from the Democratic Republic of Congo that have arrived in Michigan over the past two years.

“They told us that in America, there’s peace, there’s safety, you’re not going to see killing anymore, that it was basically a safe haven,” Lyoya’s mother Dorcas said through a translator during a Thursday press conference, the Detroit Free Press reported.

According to the paper, people from Congo made up the largest number of refugees in Michigan in 2020 and 2021.

Lyoya was the oldest of six children in the family, and was working in a small manufacturing plant making auto parts.

“I’m very surprised and astonished,” Dorcas told the paper of their flight from violence in Congo, only to “find in America the same thing has been following us.”

Lyoya’s father Peter likened his son’s death to a “genocide.”

“I didn’t believe that ... there’s a genocide in this country,” he said. “I didn’t know that here in America, there can be execution style ... to be killed by the police officer.”

This story was updated with information about Lyoya’s parents.