Upside-down braille signs on the Detroit QLine cause complaints Randiah Camille Green
Signs at the Line streetcar stops have braille upside down, along with accompanying text in English, raising questions from some riders. Operator M-1 Rail insists they are correct.

Cathy McAdam is blind and has been reading braille since she was four. Despite her lifetime of experience, she’s never encountered upside-down braille signs like the ones along the Detroit QLine.

The signs have the name of each QLine stop in English text with accompanying braille to assist the blind and visually impaired. However, they were installed so that both the braille and English are inverted at each of the 12 QLine stations.

“The braille is correct, it’s just upside down,” McAdam tells us on a snowy November morning at the QLine. “I’m 76, so I know my braille.”

After flipping her hand upside down to read “Grand Boulevard” at the station, she asks if the accompanying English is also upside down. When we reply, yes, she adds, “Well, that’s nuts.”

McAdam isn’t the only person who questions the installation. Detroiters have been asking if the signs are some kind of cruel mistake since the 3.3-mile streetcar opened in 2017. QLine spokesperson Dan Lijana says M-1 Rail, the nonprofit that owns and operates the QLine, has repeatedly addressed questions about the braille signs over the years.

“If you’re not blind and you look at the sign, it does look upside down but I can say with 100% confidence that we had numerous meetings with the community and made sure they were installed properly,” he says.

One of the blind people involved in that process was Michael Powell.

Powell was M-1 Rail’s liaison for installing the braille and was president of the National Federation of the Blind (NFB) of Michigan at the time. He still serves as a board member for the NFB state chapter.

“Those signs were evaluated by competent braille readers. I was one of them,” Powell says. “If you know how to read braille, you know they’re correct. I checked every one of them and I’ve been blind all my life.”

Richard Clay is also a board member of NFB’s Michigan chapter. He explains that braille is often installed upside down at braille museums, braille parks, and other places where blind people would read it while standing.

To help demonstrate why, he provides the following explanation.

“If a blind person is sitting down reading a book or notes they may have on a table, we’re reading the braille from left to right,” he says. “It’s laying flat. The minute I stand up, it’s going to be very awkward for me to hold that book in my two hands and read the braille with it facing toward me. What we do is take that book or notepad, it sounds weird, but we flip it upside down and bring the back of it to our stomach area and then read it with one hand. The appearance is that you’re reading braille upside down but it’s actually how we read all the time standing up.”

The only difference in this case, Clay says, is the upside-down English text accompanying the braille, which he points out blind people can’t see anyway.

Powell also says the braille is positioned so blind people can read it right side up at fingertip level, or if they place their hand over the railing. The sign at the Canfield stop is blocked by a lamppost, however, making it hard to reach.

Randiah Camille Green
The braille sign at the Canfield stop is blocked by a lamppost.

McAdam still doesn’t believe the upside down signs are as commonplace as the NFB of Michigan is making it seem.

McAdam is a disability advocate with Detroit Disability Power along with her partner Michael Patten, who is visually impaired. Patten is the former Americans with Disabilities Act (ADA) program manager with the Suburban Mobility Authority for Regional Transportation (SMART).

“Not only is it not common, but it’s not ADA compliant, though I’m not an ADA expert,” McAdam says. “I’ve never experienced a braille sign like that. That doesn’t mean they don’t exist, but I don’t believe this is common. At that height, I can see why they did it, but what [they] did is they actually made it unusable for sighted people.”

Patten agrees. “Most blind people don’t read braille upside down,” he says. He also isn’t a fan of the signs’ location — roughly waist height on the side of a railing leading up to each station’s boarding platform.

“You’re going to ask people who are blind to wait here? The QLine doesn’t pick you up, here,” he notes. “Wouldn’t it be better to have the braille where everyone else is waiting, by the shelter? What if the person is new to the area and wants to know the station they’re boarding at? If you say to someone who is blind if you need to know the name of the stop, find the shelter, and there will be a braille sign, OK.”

He continues, “But to tell someone, to get the name of the station you have to go all the way to one end or the other where you can’t board the QLine, and then you have to feel upside down? No.”

Patten says those aren’t the only problems. While the station name also appears in large print for the visually impaired, it’s white text on a silver railing, which Patten says doesn’t provide enough contrast for low-vision riders. 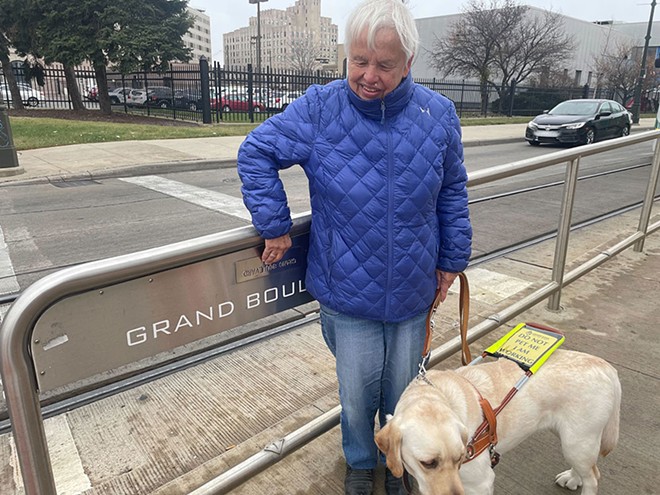 Randiah Camille Green
Cathy McAdam, who is 76 and has been reading braille since she was a child, says she is unfamiliar with upside-down braille signs.

Emails obtained by Metro Times dating back to 2017 show members of the disability community have also complained about the braille signs.

In the emails, Powell mentions that someone contacted the NFB of Michigan to report the signs being upside down.

On May 10, 2017, Nicole Brown, who was the community relations manager for M-1 Rail at the time, wrote, “We did a test ride yesterday with Warriors on Wheels and several of their friends who joined us had a visual impairment. It was expressed to us that they could not read [the braille] and that having it on top of the railing would have been more beneficial.”

Powell replied, “This goes back to the familiarization and public education issue… I have been reading Braille all my life and I was able to easily locate the signage and read it without difficulty. The letters were clear, they read from left to right, and the placement of the Braille and print labeling was consistent. It should prove to be very functional to experienced readers and those just learning Braille once they have been shown the layout.”

ADA requirements for braille do not dictate whether it should be upside down or right side up.

Clay, the NFB board member, says braille signs are typically installed the “normal way” when they are at chest level facing a person. In cases where the braille is placed lower than chest level or in a spot where the blind person would be reaching over a railing to read it, it may be installed upside down.

The Great Lakes ADA Center’s standards for “rail station signs” state that at least one sign identifying the specific station should be duplicated in braille and be provided on each platform or boarding area in uniform locations throughout the system.

The Great Lakes ADA Center also notes that braille “shall be positioned below the corresponding text. If the text is multi-lined, braille shall be placed below the entire text.” Tactile signs, including braille, “must also be located between 48 and 60 inches above the ground surface.”

Braille at the QLine stations is positioned on top of the corresponding text.

“ADA compliance is a minimum requirement, so while people adhere to the ADA the best they can, if that’s the only focus then they’re falling short of creating an inclusive environment,” she says. “The focus should be on creating inclusion and accessibility that would be far greater than the minimum requirement.”

Junior is the advocacy and community education coordinator for the Disability Network and says an audio announcement is recommended for public transportation stops. An audio announcement plays at each QLine stop inside the streetcar, but not at the stations.

That’s seconded by the ADA. Its guidelines say that “emerging technologies such as an audible sign system using infrared transmitters and receivers may provide greater accessibility in the transit environment than traditional Braille and raised letter signs.”

An often-cited statistic is that fewer than 10% of blind Americans read braille. Clay says the reality is higher than that, but it’s “definitely low.”

“The actual number I don’t know, but braille readership is down because schools aren’t teaching it as they should be and it’s unfortunate,” he says. “If you go to older populations where blindness is occurring at a faster rate then it’s probably even less than 10%. A lot of places have begun to lean on technology instead, but braille is far superior.”

Clay, who acknowledges he’s never actually ridden the QLine, accuses the people complaining about the braille of being hypercritical. But he also says there may be room for improvement.

“If the braille sign is way far away from where you get off, could they put some signage closer? Sure,” he says. “But I’m not a big fan of finding things that could be done better and then trying to blow them up to force someone to do things in a way that is easier for me. I think some folks are just being kinda prickly. If the announcement is there, and the signage is there and it’s legible, what are we doing here?”

As a final thought, he adds, “things come up like this everywhere. Somebody finds something and they want to jump on the horse and scream to the mountaintops, but people read braille upside down all the time. Not just in public but in their houses too.”

M-1 Rail director Lisa Nuszkowski says she is in touch with Detroit Disability Power and other groups to figure out if adjustments need to be made.

“We were basing it off the best information that we had at the time,” Nuszkowski says about the braille signs. She joined M-1 Rail in 2020 after the signs had already been installed. “M-1 had worked with the National Federation of the Blind of Michigan on what was to be displayed on the signage and the location. They went out with a person from that organization that said they were able to read it clearly and that he had been reading braille all his life, and we took that at face value. Now that we’re learning that there’s perhaps a better way to do it, I’m definitely committed to adjusting it so it works for the most number of people.”

Meanwhile, the City of Detroit is facing a serious crisis in providing paratransit services for residents.

City Council rejected a new contract to fund rides for disabled persons with Transdev, a French company that riders complained provided poor service. In response, Mayor Mike Duggan enacted an emergency plan to continue paratransit services with various companies until they could find a permanent provider.

During their last session of 2022, state legislatures passed a bill to extend the QLine’s $5 million annual subsidy for an additional 17 years, keeping rides free until 2039.