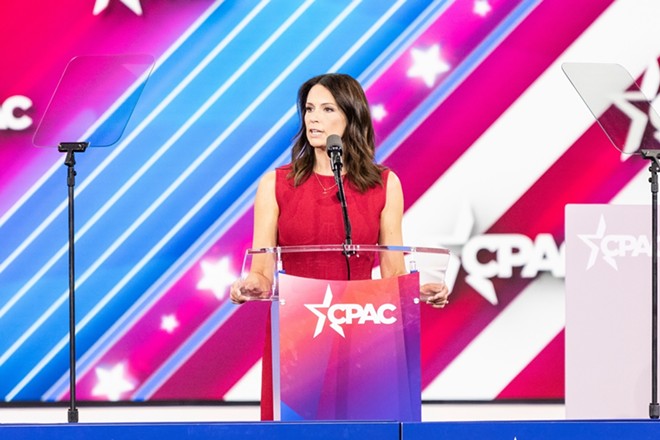 As Dixon tries to soften her image in the final weeks of Michigan’s gubernatorial race, Metro Times found numerous instances in which she used her platform to sow divisions, make insensitive comments, and spread misinformation about the 2020 election and COVID-19.

Polls show that Dixon is narrowing Democrat Gov. Gretchen Whitmer’s lead in the race as the West Michigan Republican tries to appeal to moderates and independents by toning down her rhetoric. But Dixon — who said her experience as a conservative commentator prepared her to run — can’t run from her history of using inflammatory rhetoric and giving voice to fringe characters in the MAGA movement.

Dixon’s show ran from June 2019 to May 2021, the month she announced her gubernatorial campaign.

In one segment in June 2020, Dixon defended blackface after YouTube star Jenna Marbles apologized for doing an impression of rapper Nicki Minaj that involved darkening her skin with makeup.

“What is acting if you are not acting like someone else?” Dixon asked. “She was being funny.”

Dixon added, “It was clearly comedy, and so this is where we are right now. Comedians have to go by the wayside. We can no longer have comedy.”

Also in 2020, amid the protests for racial justice following George Floyd’s death by Minneapolis police, a number of companies reviewed their logos and branding. Mrs. Butterworth’s parent company Conagra Brands announced that it would review the shape of its syrup bottles, which have been criticized as an example of the “mammy” stereotype.

In a segment, Dixon imitated Mrs. Butterworth’s voice, saying, “So every Saturday my husband comes out of the pantry with the Mrs. Butterworth and says, ‘Hello girls, I’m thick and rich,’” Dixon said.

In the same segment, in discussing a similar move by the former Uncle Ben’s rice brand, Dixon’s co-host Matt Locke said, “You want to be really over the edge? What are all the Asians going to say about the rice going away? Gotta have some Uncle Ben’s!”

On a separate show, Dixon called hijabs “oppressive garments” and suggested Iranian women are being “murdered by their own family” for marrying without their consent. Of course, many Muslim women say they are happy to wear a hijab, as it is a symbol of their faith.

On another show, Dixon repeated the racist claim that suggests Planned Parenthood aims to control the Black population.

“We have so many Black activists who are now coming out and saying Planned Parenthood puts 80% of their clinics into Black communities,” Dixon said. (In 2015, NPR reported that a Guttmacher Institute survey of all of the nearly 2,000 abortion clinics in the U.S. found that 60% were in majority-white neighborhoods.)

In another segment, Dixon agreed with Locke when he made an apparent joke about transgender people.

Dixon agreed, saying, “We keep bending to the mob.”

She added, “We cannot be held down by men who have decided to transition or think they are going to transition into womanhood because it’s different.”

On Dixon’s show, Locke also claimed that Democrats had constructed a “perfect storm,” saying the George Floyd protests and the COVID-19 pandemic were part of a complex scheme to beat former President Donald Trump.

Locke resorted to violent rhetoric when he defended Mark and Patricia McCloskey, the St. Louis lawyers who brandished guns at Black Lives Matter protesters in 2020.

“These people are lucky they didn’t show up at my house because there’ll be a lot of them laying on the ground,” Locke said. “I would be shooting first and asking questions later.”

After Locke’s diatribe, Dixon responded, “This is what so many people are saying we are going toward a true civil war in this country.”

Maeve Coyle, a spokeswoman for Whitmer’s campaign, says Dixon’s comments during and after her media career underscore that she is a danger to Michigan.

“Tudor Dixon’s long record of racist and bigoted statements while pushing conspiracy theories and casting doubt on our democracy is dangerous,” Coyle tells Metro Times. “After spending years platforming anti-abortion activists and election deniers, Dixon is now trying to force her extreme agenda to ban abortion with no exceptions for rape, incest, or health of the mother and undermine our elections on Michiganders.”

She adds, “While Dixon has a well-documented history of embracing and making racist, offensive statements, Governor Whitmer has brought people together to make historic investments in public education, secure major increases in funding for law enforcement, strengthen Michigan’s infrastructure, and fight like hell to protect access to abortion and reproductive freedom.”

While Dixon has toned down her rhetoric, she continues to make controversial statements.

In a speech at Oakland County Republican Party headquarters on Oct. 13, Dixon mocked Whitmer’s laugh, saying it sounded like a “snort” from Vice President Kamala Harris.

“When you are held accountable to the things that you’ve done … and all you can do is snort out a Kamala Harris-style laugh and say, ‘I don’t even know how to respond to that,’ then I guess that you’re not in the right job.”

“If it weren’t her laugh, it’d be her smile or the way she dressed,” Arisha Hatch, vice president of Color of Change, a group that advocates for racial justice, told The Los Angeles Times. “It is just another conversation that demonstrates how difficult it is to be a woman-of-color leader in this country.”

On the campaign trail, Dixon perpetuated stereotypes of Asian-Americans and China, saying in January that “my Asian friends were the hardest workers in the class.”

She used xenophobic rhetoric to attack the deal with Chinese battery company Gotion High Tech, which brought $2.4 million in private investments and 2,350 jobs to Big Rapids in Michigan.

Last week, Dixon was featured at a fundraiser hosted by Carle Higbie, a disgraced conservative activist who resigned from the Trump administration after making racist anti-Muslim and anti-LGBTQ statements.

“Tudor Dixon’s extensive history of dangerous remarks and laughing at out-of-touch comments by guests she brought on her own show is just the latest reason why she is entirely unqualified to lead,” Michigan Democratic Party spokesperson Rodericka Applewhaite said. “Michiganders deserve better than Dixon and her record of pushing backward beliefs and extreme conspiracy theories — not to mention her DeVos-backed agenda designed to decimate public schools, slash funding for law enforcement, and ban abortion with no exceptions for rape, incest, or health of the mother.”

Dixon’s campaign did not respond to requests for comment.