The congresswoman turned up the heat on Stellantis and U.S. Ecology for air violations 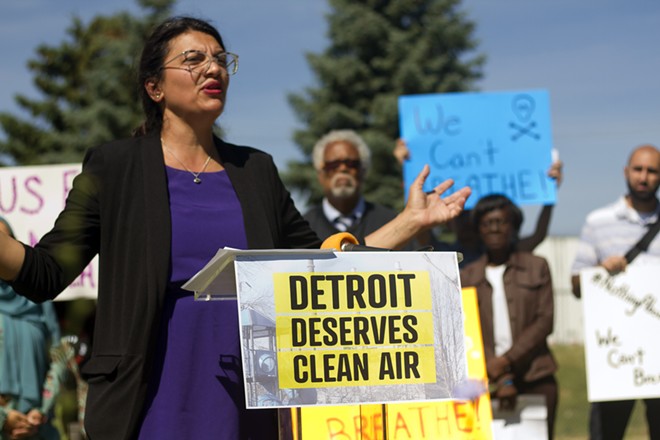 U.S. Rep. Rashida Tlaib fired off letters to two big polluters in Detroit on Friday, demanding protections for residents living near the facilities.

The letters — co-written by U.S. Rep. Ro Khanna, a California Democrat who is chairman of the House Oversight Subcommittee on Environment — are addressed to U.S. Ecology and Stellantis, both of which have been cited numerous times for environmental contamination.

The letters follow a congressional field hearing in Detroit in August that focused on the two facilities and the role they play in environmental racism.

Detroiters living near U.S. Ecology’s hazardous-waste processing plant at E. Kirby and St. Aubin streets are inundated with dust, pollution, and noise. The plant has received about 35 violations since 2014.

“We are deeply concerned that your company’s actions have confined residents to their homes, some hooked up to breathing machines, because the air outside is rotten, metallic, and fishy, filled with dust and volatile organic compounds,” Tlaib and Khanna wrote.

Despite the violations, nine of which came in the past two years, U.S. Ecology is requesting that Michigan environmental regulators renew its operating permit at the facility.

“This flagrant disregard for the health and well-being of people living near your facility will not be tolerated and should bear heavily on the State of Michigan’s upcoming decision regarding the renewal of your operating permit,” the letter states.

In the letter, the lawmakers questioned what the facility was doing to protect residents.

The lawmakers also wrote a letter to Stellantis, which operates a stench-spewing Jeep assembly plant on the city’s east side.

The Michigan Department of Environment, Great Lakes and Energy (EGLE) slapped Stellantis with seven air quality violation notices since September 2021. Most of the violations stem from stench emitting from the plant.

EGLE is working with Stellantis on a proposed consent order that would requite the automaker to address the nauseating smell that has been wafting from the plant for more than a year.

The lawmakers questioned whether the consent order is sufficient.

“Residents have already expressed disappointment with what they perceive as ‘a great PR move for the company’ that ‘does nothing for the community being impacted by the smells,’” the letter states. “We share residents’ concerns about whether a consent order will effectively hold your company accountable, deter future violations, and deliver clean air and a safe environment for nearby residents.”

Included in the letter are snippets from testimony from residents who live nearby.

“This plant is making us sick,” Robert Shobe, who lives near the plant’s emitting stacks, said at the committee, according to the letter. “I am a cancer patient. I am physically disabled. I suffer from COPD [chronic obstructive pulmonary disease]. When the smell comes down around my house, my eyes burn. I have a cough from smelling the paint. I feel a tightness in my chest. I have gotten headaches from the smell, and I have been living as a prisoner in my own house for well over a year.”

Pollution is a widespread problem in the majority-Black city. The University of Michigan School of Public Health estimates that air pollution kills more than 650 Detroiters a year — more than twice the number of residents killed by gun violence annually. Thousands more are hospitalized, and children miss a disproportionate number of days at school because of illnesses and asthma.

Despite the disparate impact of environmental contamination in Detroit, state regulators continue to allow companies to pollute.