The latest on tomorrow’s Islamophobic protests 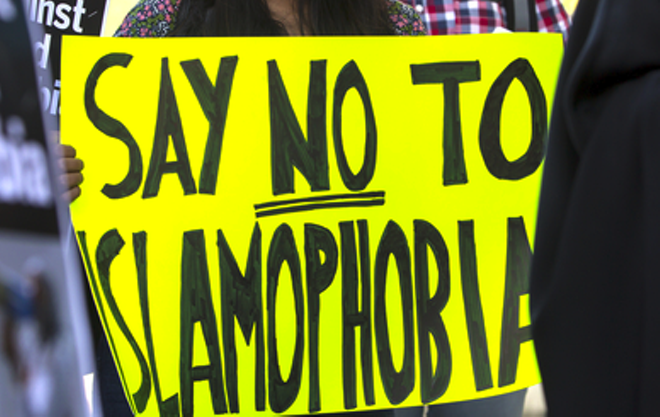 Photo courtesy Shutterstock
The nation's premier Islamophobic group, ACT for America, has organized more than two-dozen rallies at cities around the United States to take place tomorrow. Officially called the "March against Sharia," it's less about "Sharia law" — a non-issue in the United States, where it is illegal — than it is about getting Islamophobes whipped up into a fury about this tiny minority.

According to the march organizer's web page, there will be two such marches in Michigan tomorrow: one in Lansing and another in Southfield.

What's more, a coalition of 129 groups have written a letter urging mayors of the cities where the marches will take place to disavow the protests and their anti-Islam agenda. Lansing Mayor Virgil Bernero signed on. Ken Siver, mayor of Southfield, while expressing support for first amendment rights, voiced his disagreement with the protest.

We've been able to find no word from Republicans, however, that isn't supportive. The march is showing up on GOP media such as the Facebook page of the Oakland County Republican Party. In fact, based on evidence gleaned from a reader, at least one Michigan GOP precinct delegate is helping organize the march.

The fact that the group organizing the march is a documented Islamophobic group has organizers scrambling for a new tack to take. They seem to have settled on the argument that those opposed to the march’s ugly nativist overtones are “anti human rights” — specifically when it comes to the issues of child marriage and female genital mutilation.

Frankly, we give it as much credence as we would a group of neo-Nazis rallying against the demeaning roles Orthodox Judaism forces women into. A sort of, “Yeah, riiiight. It’s all about those poor women.” (Wink, wink, wink.)

In fact, we couldn’t furnish a better response to that line of hogwash than that written by Julia A Pulver. Since ACT for America brings up FGM, Pulver points out that the matter is already being dealt with by law enforcement and state legislators of both parties. Also, the group practicing FGM that has been seen in the news recently is a small Muslim sect. (The equivalent of ACT for America’s outrage might be somebody saying they are opposed to Christianity because of its widespread speaking in tongues, snake-handling, and rejection of modern medicine in favor of healing prayer.)

But best of all is Pulver’s response to accusations that Muslims practice childhood marriage and rape 9-year-old girls. Pulver agrees that it is a major problem in America today:

There is a radicalized, extremist religious group in America that is force-ably marrying girls as young as 10 and 11 to their adult male rapists, forcing them to bear children before they graduate elementary school. This dangerous religious group should absolutely be stopped from selling 4th and 5th grade girls into sex slaves to adult male rapists! We should be doing everything in our power to put an end to the child marriage practices that are totally legal here in America in 2017. But this practice is not coming from Muslim communities, it’s coming from Pentecostal Christian communities.


Oopsie. See, that’s an issue that ACT for America’s Islamophobe agenda can’t countenance. Because they’re not really a human rights organization at all: They only bring up “human rights” when they feel it can be used against the Muslims they despise.

Finally, we received an interesting letter here this week in response to our coverage of the hate march. It was from somebody who insisted that: “To oppose the march against sharia means you support sharia” — and are therefore against human rights.

This is the comically weak variety of rhetorical ju-jitsu you can expect from March against Sharia supporters. ("I am rubber, you are glue")

But there is a human rights issue at stake here, and it’s worth noting. It’s ably summed up here in an excerpt from the letter we mentioned earlier:

Between 2014 and 2015, FBI data indicates that hate crimes against Muslims increased by 67%. Bias-motivated violence continues to target Muslims, Arabs, South Asians, and a number of other communities. Just this year alone there have been numerous murders of individuals who are Muslim or were targeted based on anti-Muslim bigotry, regardless of their religion. In addition, several mosques around the country have been targeted by arson. Negative misperceptions of Muslims have also resulted in children being the target of bullying and harassment across the country …


In other words, the very fear and loathing, xenophobia and nativism, prejudice and bigotry that are encouraged by events like this “March Against Sharia” help aggravate the climate that is already hostile to the country’s tiny Muslim minority.

How tiny is it? The most recent figures available show that Muslims constitute around 1 percent of the population. As we concluded at the end of an earlier article on this march, in a country where a tiny minority of the citizenry has grabbed all of the economic gains over the last 40 years, perhaps there’s another 1 percent we ought to be watching more carefully.