We CAN do medium-sized things

Senate Democrats erupted in jubilant cheers as Vice President Kamala Harris announced the results of the final vote on the Inflation Reduction Act of 2022, the pared-down, Joe Manchin-approved final version molded out of the ashes of Build Back Better. It passed by the slimmest possible margin, 51-50, requiring Harris’s tie-breaking vote. But it passed.

Make no mistake: The Inflation Reduction Act is good policy. The climate, tax, and healthcare bill will invest nearly $400 billion in incentives to lurch our energy economy over to renewable sources. That will focus on consumers, empowering everyday folks to make more sustainable investments in home energy alternatives like solar and wind, or transit, like electric vehicles. On the healthcare front, it will extend Affordable Care Act subsidies until 2025 to 13 million Americans that originated in the pandemic. It also empowers Medicare, for the first time, to negotiate prescription drug prices and caps out-of-pocket prescription drug maximums to $2,000. Finally, it establishes a minimum corporate tax on “book” income, which is critical to preventing major corporations from establishing foreign tax havens.

This is good policy. But it’s not quite the “Big F’ing Deal” it’s being touted as — it’s more like a medium-sized F’ing Deal.

For all the Inflation Reduction Act does, there’s so much that it doesn’t do. For starters, it does nothing about childhood tax credits, Medicare expansion, paid family leave, universal pre-K and so much more that was in the original Build Back Better bill. But even where it does do good, it pulls punches. It offers serious climate carrots, but it doesn’t enforce climate sticks. It extends ACA subsidies, but it doesn’t establish a public option. It allows Medicare to negotiate prescription drugs, but only 10 of them. It caps insulin costs at $35, but only for Medicare beneficiaries. It establishes a corporate minimum tax, but it doesn’t eliminate the carried interest loophole.

I can already hear the grizzled political veterans responding with callous incredulity at my naiveté. “Of course it doesn’t. This is how politics works.”

They’re right, of course. This is how politics works. But that is why our politics aren’t working for millions of Americans.

And they tend to be young Americans.

Take climate for example. Young folks are making life decisions around climate scenarios they see as increasingly inevitable. To be sure, the Inflation Reduction Act is the single biggest investment in addressing the climate crisis. And that’s exactly the problem. Estimates suggest that this should bring down greenhouse gas emissions by 40% by 2030 — that achieves 80% of Biden’s goal of 50% reduction. But that goal is already a hedge. It doesn’t reflect the reality of what it will take us to actually address the crisis. Medicare price negotiation is great! But rather than negotiating on behalf of all Americans, like President Biden ran on, this only applies to Medicare beneficiaries. This means that young folks — and by that, I mean anyone who’s not technically a senior citizen — are excluded.

This is how politics works. But that is why our politics aren’t working for millions of Americans.

Then there’s the tax piece. Right now, the Federal Reserve is flogging interest rates to address sky-high inflation. That’s disproportionately pricing young people out of college, cars, and first homes. The other approach to pulling money out of the economy is to tax the wealthy. And while the Inflation Reduction Act does do that to some degree, it dodges others. In particular, the carried interest loophole that Sen. Kyrsten Sinema saved at the last minute will continue to allow financial services companies — some of the richest companies in the world — to continue to pay egregiously low taxes. 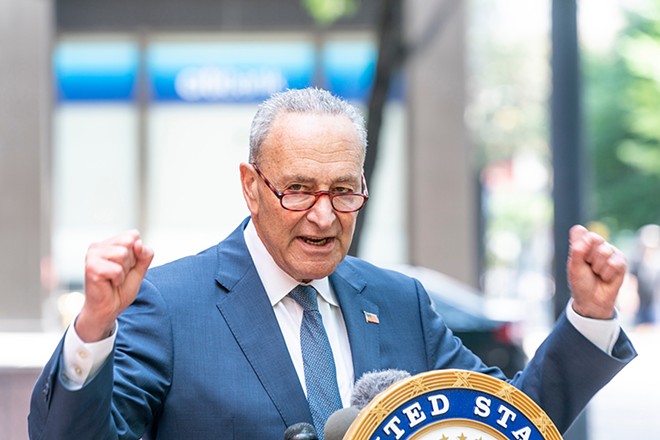 After the bill passed in the Senate, Senate Majority Leader Chuck Schumer said defiantly, “To Americans who’ve lost faith that Congress can do big things, this bill is for you.” I worry that, in fact, this bill is for them.

This is a failure of the system of our politics itself. It’s in the ways that congresspeople are so beholden to political donations that they, aside from rare situations, get captured by powerful corporations and other special interests. It’s a failure in the fact that Citizens United allowed those corporations and other special interests to end-around politicians entirely by spending gobs of money to shape election outcomes.

Consider the Medicare drug price negotiations. In his letter to legislators, the president of PhRMA, the lobbying organization dedicated to advancing the interests of drug companies, said that any legislator who votes for the bill “won’t get a free pass.” It’s a testament to the power of PhRMA that they felt they could use this kind of language with impunity.

But it’s also a testament to the public will on this issue — and the will of 50 Democratic senators to answer that call — that even the skinniest possible version of Medicare price negotiation passed. And it proves that we can do medium-sized things.

But medium-sized things are still, well… things. And that’s better than nothing. The irony here, of course, is that if we want big things, perhaps the best way to get them is to stack up a bunch of medium-sized ones. And that’ll mean that the only way around our broken political system is through it.

Once again, 2022 is one of the most important elections in our lifetimes (man, I get tired of writing that). And if we want this administration to keep delivering anything at all, we’d better come out and vote. And maybe, just maybe, if we can keep the House and deliver two more votes in the Senate, they might be able to deliver a few truly big F’ing deals.

Originally published Aug. 11 in The Incision. Get more at abdulelsayed.substack.com.