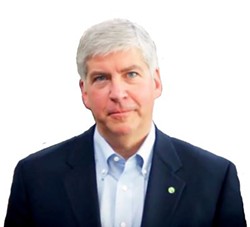 Here at the Hits, we can admittedly be a little slow on the uptake. Eventually, though, we tend to get where we need to be.

What set us rambling down the particular path we’re writing about this week was a bit of confusion. In following the coverage of the state’s planned takeover of Detroit’s city government, we’d seen references to both an emergency manager and an emergency financial manager being appointed.

Which set us to wondering, which is it?

It may seem to a casual observer that the two terms are interchangeable — hell, even reporters and commentators paid to know better tend to treat them that way — but they are definitely not the same things. The difference, in fact, can be significant in terms of the authority granted to each. Emergency managers have a lot more power and leeway than emergency financial managers.

What we learned is that the confusion is justifiable. Instead of forming a straight line, the dots we began to connect did a lot of zigzagging.

Put another way, Michigan Gov. Rick Snyder and the Republican-controlled state Legislature have been playing the equivalent of a three-card Monte street hustle on us. No matter how hard you try to keep your eye on that ace of hearts, all the quick-shuffling sleight of hand makes it almost impossible to know where it really is.

Turns out that the correct answer to that question is: YES!

Following up on a MT News Blog item that we posted last week, here’s our take on the double-dealing that has taken place in Lansing:

Last November, Michigan voters went to the polls and, by a margin of 52 percent to 48 percent, repealed Public Act 4, the extremely controversial law that allowed state-appointed financial managers to assume both executive and financial control of financially troubled municipalities and school districts.

In the wake of last year’s referendum, state Attorney General Bill Schuette authorized the reinstatement of PA 72, a law passed in 1990 that allowed for the appointment of emergency financial managers, who had less sweeping powers than those allotted to emergency managers.

Because PA 72 was automatically revoked once PA 4 was signed into law by Gov. Snyder in 2011, critics on the left claimed (we think credibly) that it was illegal for Schuette to reinstate it, but those objections were made in vain.

In addition, Republicans in the state Legislature quickly set about crafting a new emergency manager law to replace PA 4. As Wayne State University Law School Professor John Mogk told us, the Legislature couldn’t simply duplicate a law that had just been rejected by voters. There had to be some substantive difference between PA 4 and whatever the Legislature and Snyder decided to replace it with.

The result was PA 436, passed during December’s lame-duck session.

Because PA 4 was successfully attacked for being inherently undemocratic, the new law attempted to walk a more acceptable line. Instead of completely taking away the authority of duly elected officials to determine their fate, as the old law did, PA 436, in effect, told them they were going to have to swallow some harsh medicine, but it at least gave them a small selection of bitter pills to choose from.

In fact, the new law was titled the “Local Financial Stability and Choice Act.”

Under this new law, if the state determines a financial emergency exists, the elected officials governing a municipality or school district can select one of four options: consent agreement, emergency manager (receivership), neutral evaluation process (aka mediation), or Chapter 9 bankruptcy. (For this last option, the governor would have to agree.)

But here’s where things get really tricky.

PA 436 doesn’t legally take effect until March 28, 2013. So, if the city’s attempts to appeal the governor’s decision fail, and someone is appointed to take control of Detroit between now and then, that appointee would technically be an emergency financial manager …

Until March 28, that is, at which point said emergency financial manager automatically becomes an emergency manager, and the city is denied the opportunity to choose one of the other three options.

In other words, the “choice” provision touted in PA 436 applies only to units of government where financial problems come to a head after March 28. For cities such as Detroit, on the other hand, it will essentially be as if PA 4 was never repealed.

That it seems hardly fair, or even legitimate, that Detroit should be subject to a repealed law did not escape a majority of the Detroit City Council, which last week (without receiving much attention from the local media) passed a resolution — introduced by Councilmember Kenneth V. Cockrel Jr. — urging Snyder to “respect the right of Detroit’s citizens to choose their own financial destiny by allowing Detroit’s duly elected representatives to make this important decision under Public Act 436 …”

(We can almost hear Snyder laughing at that one.)

In an email he sent our way after talking by phone, Wayne State’s Mogk points out that, “of the four options under Act 436, the state most likely sees three as impractical [for Detroit].  Bankruptcy is not desired, the consent agreement has been tried and failed, and mediation will take too long given all of the time that has passed already.”

We agree with Mogk that this seems to be the state’s perspective. But there’s also a certain absurdity to that perspective, especially in regard to the consent agreement. Detroit, after all, has been operating under just such an agreement since April 2012. It was signed by the city with a gun at its head. For the state to now be claiming that Detroit doesn’t have a credible plan to address its financial problems is to ignore the fact that for the last 11 months, the city has been operating under a plan forced on it by the state.

That, we expect, will probably be part of the argument made when the city appeals Snyder’s decision to appoint an emergency financial manager in Lansing on Tuesday (after this rag goes to press).

In regard to that appeal, which will almost certainly fail, the city has the option of taking its case to the judiciary, at the district court level. However, the initial authorization to pursue an appeal could have been made by either the mayor or the City Council.

Another fly in the ointment could be in how the law is written, where the ability to seek judicial redress would require both the executive and legislative branch to sign off on the decision — and Mayor Dave Bing has made it clear in recent days that the executive branch will not join City Council’s lawsuit, thus ceding control of the city to the state.

From what we can tell, there is likely to be a federal court challenge to the emergency manager law. Sources tell us that such a suit should be filed soon, maybe within days. It’s not likely, however, that an injunction will be sought in an attempt to prevent a state overseer from being installed.