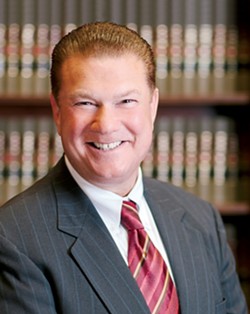 Republican state Sen. Peter Lucido's sexist joke to a young reporter sparked an investigation into possible sexual harassment that could lead to disciplinary action including losing chairmanships or being asked to undergo sensitivity training.

"On behalf of Senators and staff, we are writing today regarding a recent incident of alleged harassment that occurred in the Senate," the two senators wrote. "While you are likely aware of the situation, we feel an obligation to bring this matter to your attention pursuant to the Michigan Senate Policy and Procedure Manual."

“Sexual harassment has no place in the Michigan Senate,” the letter concludes. “We take these allegations seriously and trust that you will take appropriate action to resolve this matter.”

The reporter, 22-year-old Allison Donahue of Michigan Advance, found herself in the middle of the story when she asked Lucido about his involvement in a misogynistic anti-Gov. Whitmer Facebook group first reported by Metro Times. While talking to a group of high school boys from his alma mater, the all-boys Catholic high school De La Salle which is under investigation for allegations of sexual hazing on its football team, Lucido told Donahue, "You should hang around! You could have a lot of fun with these boys, or they could have a lot of fun with you."

Donahue then reported what Lucido had said to her in her story.

"I didn’t set out to write this story when I showed up to the Capitol Tuesday morning," she wrote. "I didn’t really want to write it after I left. I didn’t want to become the subject in my own writing."

The news drew Lucido swift condemnation from both the left and the right, getting picked up by national outlets like The Washington Post, The New York Post, and CNN.

Lucido called the comments out of context, but eventually offered a curt apology on his social media accounts. He has not yet contacted Donahue to apologize, according to Michigan Advance.

"This is gaslighting, pure and simple," Michigan Advance editor in chief Susan  Demas wrote. "There is absolutely no question that what Lucido did was wrong. And the most disturbing part is that he’s shown that he doesn’t believe that."