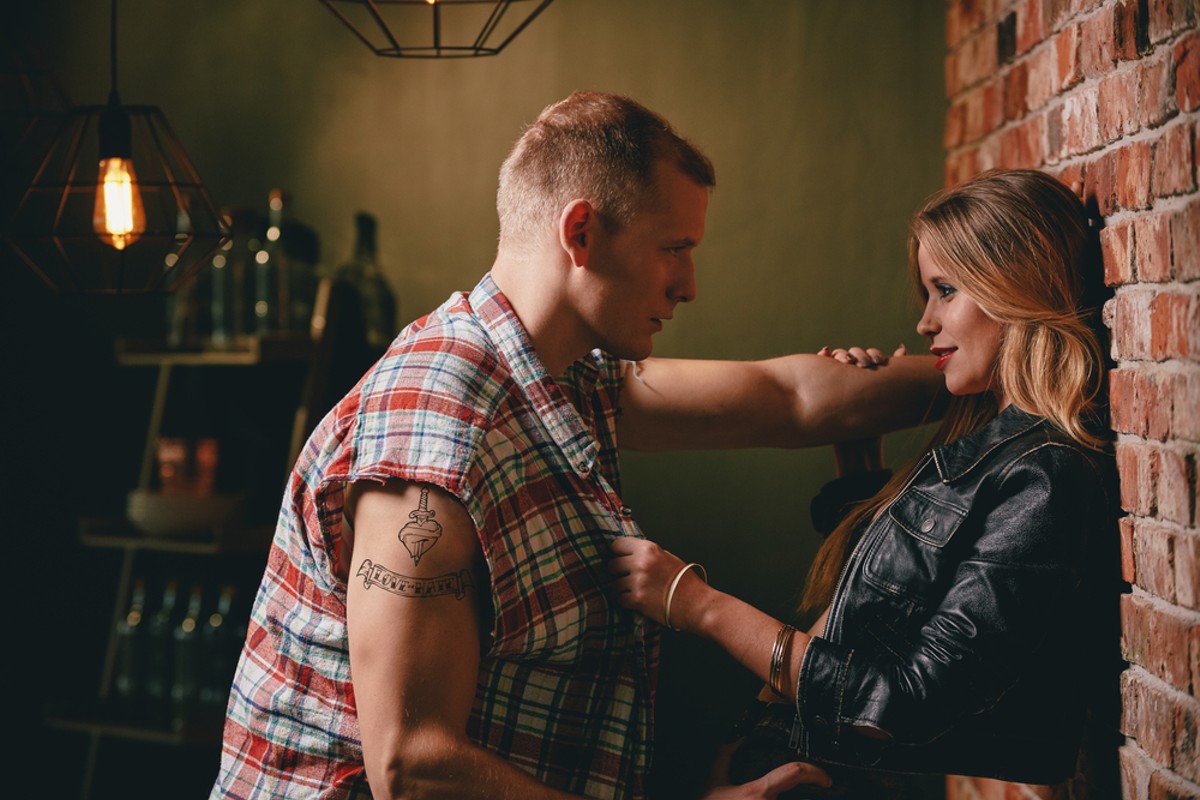 I married my high-school sweetheart at 17, had a baby, together a few years, mental illness and subsequent infidelity led to things ending. My ex-husband remarried, divorced again, and is now in another LTR. I'm in a LTR for a decade with my current partner (CP), we have a few kids, and I'm so in love with him, it terrifies me. My ex frequently makes sexual remarks to me, low-key flirts. I feel an animal attraction in the moment. Whatever. I don't want to be with him, my relationship with CP is solid AF, and I get amazing fucking at home from a man far more skilled. CP knows about ex-husband's remarks and one actual physical advance. CP has offered to talk to my ex. I told him nah, I'll deal with it and make it stop. I talked to my ex-husband today, and he said: "I'm sorry, it's just teasing, I won't make an actual move ever again, but you're the only woman I ever just look at and get immediately hard for, and it's only a few more years before our kid is fully grown and we don't see each other anymore. So humor me because you know we both enjoy it." And it's true that I do enjoy it. But how harmful is it to engage in flirty banter without any touching, nudity, or worse? I hate having secrets, as I feel they are barriers to intimacy, but I'm a thirtysomething mom and it is so fucking unbearably sexy to be made to feel so desirable even after all that shit between us and it'll never, ever happen because hell no am I sleeping with my ex-hubby, but knowing this man will never get a whiff of my pussy again but can't help but beg for it with his eyes gives me a sense of power like I've never fucking felt before, but even so I don't want to be a terrible person for hiding this from my CP because I don't like having secrets from him but this is just one that turns me on to no end but I should nip this in the bud and put a stop to it yesterday because it's wrong, right?

I've been with my girlfriend "J" for two years. Her best friend "M" is a gay man she's known since high school. M and I have hung out many times. He seems cool, but lately I've been wondering if he and J are fucking behind my back. For starters, J and I rarely have sex anymore. Even a kiss on the cheek happens less than once a week. Meanwhile, J's Facebook feed has pictures of M grabbing her tits outside of a gay club in front of her sister. She told me he's spent the night in her room, even though he lives only a few miles away. I've also recently found out that although M has a strong preference for men, he considers himself bisexual. I understand that everyone loves tits, even if they're not turned on by them, and gay men can sleep with a girl and actually just... sleep. I also know that her antidepressants can kill sex drive. All three things at once feel like more than just coincidence, though. At the very least, the PDAs seem disrespectful. At worst, I'm a blind fool who's been replaced. Am I insecure or is there something to these worries?

— You Pick The Acronym I Gotta Get To Work

Your girlfriend's best friend isn't gay, YPTAIGGTW, he's bisexual — so, yeah, it's entirely possible M is fucking your girlfriend, since fucking girls is something bisexual guys do and, according to one study, they're better at it. (Australian women who had been with both bi and straight guys ranked their bi male partners as more attentive lovers, more emotionally available, and better dads, according to the results of a study published in 2016.) But while we can't know for sure whether M is fucking J, YPTAIGGTW, we do know who she isn't fucking: you. If the sex is rare and a kiss — on the cheek — is a once-a-week occurrence, it's time to pull the plug. Yes, antidepressants can be a libido killer. They can also be a dodge. If your girlfriend doesn't regard the lack of sex as a problem and isn't working on a fix — if she's prioritizing partying with her bisexual bestie over talking to her doc and adjusting her meds, if she hasn't offered you some sort of accommodation/outlet/work-around for the lack of sex — trust your gut and get out.

I'm a recently divorced woman with a high libido. Now that I'm single, I've come out as a kinkster. I quickly met someone who swept me off my feet — smart, funny, sexy, proudly pervy, and experienced in the BDSM scene — and soon he declared himself as my Dom and I assumed the sub role. This was hot as hell at first. I loved taking his orders, knowing how much my subservience pleased him, and surprising myself with just how much pain and humiliation I could take. However, his fantasies quickly took a darker turn. When I say I'm uncomfortable with the extremely transgressive territory he wants to explore, he says, "I'm your master and you take my orders." I think this is shitty form — the bottom should always set the limits. When we're in play, he says that I chose him as my top precisely because I wanted to see how far I could go and that it's his job to push me out of my comfort zone. I think he's twisting my words. Arguing over limits mid-scene makes us both frustrated and angry. I'm not in any physical danger, but his requests (if carried out) could ruin some of my existing relationships. Did I blow it by not giving him a list of my hard limits in advance of becoming his sub? Or is he just a shitty, inconsiderate top trying to take advantage of a novice? After play, he checks in to see if I'm OK, which on the surface looks like great form — aftercare and all — but this also feels manipulative. How can I pull things back to where I'm comfortable? Do I run from the scene — or just this guy?

— Tired Of Overreaching From A Shitty Top

Listen to the Savage Lovecast every week at savagelovecast.com.