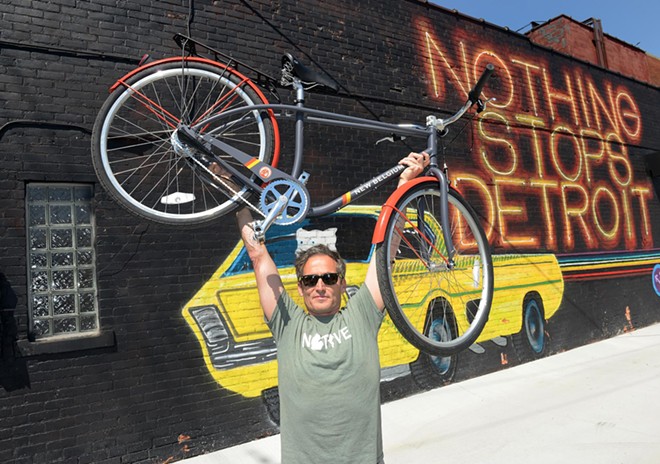 Vaughn Gurganian
Charlie LeDuff is back in Detroit.

Reporter Charlie LeDuff is heading back to The Detroit News, according to an email sent to the paper's paid subscribers ahead of a wider public announcement planned for Sunday.

LeDuff previously wrote for The Detroit News from 2007-2010, following a stint at The New York Times, where he won a Pulitzer Prize for his 2000 contribution to a 10-part series called "How race is lived in America." In it, LeDuff reported on race relations in North Carolina by embedding himself as a worker for a story titled "At a slaughterhouse, some things never die."

After resigning from The Detroit News, LeDuff switched to television, reporting for WJBK Fox 2. There, he gleefully shattered the conventions of local TV news, pulling stunts like taking a bubble bath while waiting for police to respond to an emergency call to show how long response times had gotten in the city. (A GQ magazine profile surmised that the clip was "probably the only segment in the history of local network news in which producers at the station had to pixelize a reporter's balls.") At Fox, Leduff also launched The Americans, a series that was syndicated to Fox stations nationally.

But in 2016, LeDuff again resigned, laying low working as a handyman at Detroit's American Coney Island and writing a book, 2018's Sh*t Show! The Country's Collapsing... and the Ratings Are Great.

Since 2018, he has been a regular contributing columnist to Deadline Detroit and hosting the 910 AM radio show The No BS News Hour with co-host Karen Dumas, a former aide for Detroit Mayor Dave Bing.

Dumas had also been working as a columnist for the Michigan Chronicle and radio host on 910 AM.

An editor at Deadline Detroit says LeDuff will continue to contribute to the website.

LeDuff revealed why he left The Detroit News in his 2013 book Detroit: An American Autopsy, writing that he had become disenchanted working at the paper.

"American newspapers were yellow and stale before they came off the press," LeDuff wrote. "Dog-beaten by a dwindling readership, financial losses, and partisan attacks, editors had stripped them of their personality in an attempt to offend no one. And so there was no more reason to read them. Safety before Truth. Grammar over Guts. Winners before Losers."

Here's to hoping the second go-round at the paper goes better.