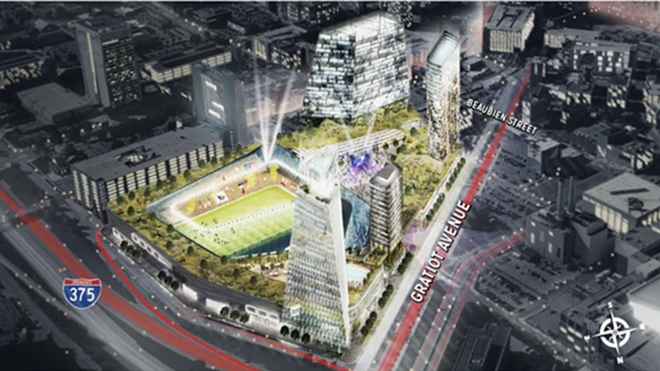 Rock Ventures
Digital rendering of the proposed $1 billion mixed-use development once planned for the "fail jail" site.
SKKKKRRRRRRTTTTTT. Hold up. You're telling us this whole jail swap thing may not even produce a new soccer stadium?!

In the latest twist in the will-Detroit-wind-up-with-yet-another-downtown-stadium saga, the Ford family has apparently joined billionaire Dan Gilbert and Pistons owner Tom Gores in their bid to bring a Major League Soccer franchise to Detroit and, if the group is successful, Ford Field will be the place that the Detroit City Soccer Club club will play.

The Free Press broke the news Thursday afternoon, citing two sources with direct knowledge of the deal. A formal announcement was issued later in the day.

The change in course spells the end for our use of the above-pictured digital rendering — an image of what the 23,000-seat, $1 billion stadium and mixed use development was to look like. The change in plans for the site would not affect the land swap deal in the works between Gilbert's Rock Ventures, Wayne County, and city of Detroit.

The Gratiot Avenue site where the stadium was to be erected is currently home to Wayne County's long-stalled "fail jail" project. In a deal that is awaiting approval, Gilbert would get the land in exchange for building the county a criminal justice complex at I-75 and E. Warren Avenue. The price tag on that would be $520 million with the county responsible for $380 million of the funding — the sum it was expecting to pay to complete the jail on Gratiot and renovate the Frank Murphy Hall of Justice. The city of Detroit owns part of the land where Rock would build the new criminal complex and has struck a preliminary deal for its own land swap with the county. You can read more about that complicated trade here.

OK, now, back to soccer. The MLS is expected to announce two expansion franchises by the end of the year that will begin play by 2020. An additional two cities will be announced some time after that. There are a dozen cities vying for the four expansion teams. As the second-most populated city in the running — one that already has a sizable soccer fan base thanks to a popular minor league team — Detroit is viewed as a viable contender. However, when Sports Illustrated took an in-depth look at each possible expansion city in December, it found two things standing in the way for Detroit: 1) its turbulent economic past ("there are competing expansion candidates with more favorable growth trends at the moment," SI said), and 2) whether the Gratiot fail jail site could be secured for a stadium.
Under the deal reportedly struck with the Fords, that second hurdle becomes a non-issue.

According to the Free Press, a site examination by an architectural firm has found than Ford Field can easily be modified to fit MLS standards. At 65,000 seats, the stadium has nearly three times the seating that Rock envisioned at its initially proposed stadium.

The official application to the MLS listed Gratiot Ave. as the only possible site for the expansion franchise. The Free Press reports, however, that league commissioner Don Garber in May indicated there were two downtown sites under consideration.

"I like both locations, but I really like the jail site," Garber told the paper at an Orlando City Soccer Club match. "If I were a resident of Detroit, I would probably rather have a soccer stadium as a gateway to my city, rather than a jail. I hope they continue to make progress with that concept."

It's unclear when exactly Ford Field entered the picture. It does seem like a possibility that would have been assessed early on — you know, a big stadium, that is already right downtown, and that is used for only 8 or 9 professional sports games a year.

What did they know and when did they know it? We’ll probably never know. And it probably doesn’t even really matter. Afterall, Wayne County Executive Warren Evans said he was acting only in the interests of the county when he decided to proceed with Gilbert’s proposed swap — he didn’t care what was erected in place of the partially constructed jail.


For now, Gilbert appears poised to wind up with several additional pieces of downtown real estate, growing his presence in the area that has come to be known as "Gilbertville." Because not only does he get the jail site if the swap is finalized, he gets the Frank Murphy Hall of Justice in Greektown and two other downtown jail facilities as well. The public will just have to wait and see what he has planned for all those new properties.