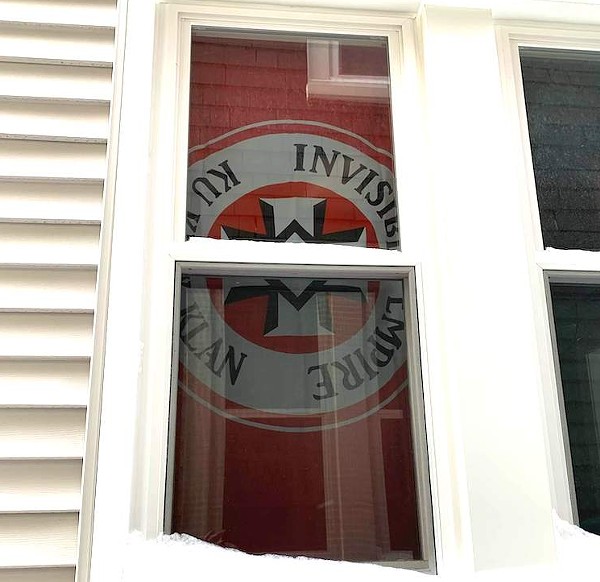 Demonstrators are gathering in Grosse Pointe Park on Sunday to rally against white residents who displayed a Ku Klux Klan flag in a side window facing their Black neighbor’s home.

JeDonna Matthews Dinges discovered the flag through her dining room window on Monday and said was was shocked and disturbed.

Grosse Pointe Park officials said they, too, are outraged and are reviewing the police response after Deadline Detroit first reported on the flag Wednesday.

“The Grosse Pointe Park Public Safety Department serves all residents of our community no matter their race, color, creed, sexual orientation, gender identity, disability or religion,” officials said in a statement. “We are committed to ensuring the safety and security of all residents of this community and we take every matter brought before our department seriously. Intolerance, hate, and ignorance have no home in the Park. Threats, either real or perceived, will not be tolerated. The Department is reviewing the facts and its records to ensure its officers have consistently acted appropriately and in accordance with policy.”

Dinges’ neighbors removed the flag after a visit from Grosse Pointe Park police on Tuesday. The neighbors told police they had hung the flag in response to Dinges installing a surveillance camera on her window sill, which was aimed at the sidewalk between her house and the neighbor’s. Dinges said she installed the camera after she found a full gasoline can in her trash receptacle.

“Grosse Pointe Park is arguably the most diverse city in the five Grosse Pointe and yet, someone felt comfortable enough to leave their racism in their neighbor’s face with the oldest symbol of white, domestic terrorism perpetuated on Black Americans for over a hundred years,” the NAACP branch said in a statement. “This signals a deeper challenge we must all overcome in our community.”

The NAACP branch is calling for more diversity in the all-white Grosse Pointe Public Safety Department and said police should have more thoroughly investigated the gas can found next to Dinges’ house.

“A modern, diverse police force would have a very different response to investigating acts of ethic intimidation and potential domestic terrorism,” the branch said.

“To never have hired a person of color and only one woman since the city was founded suggests a deeper challenge is at play and we are interested in further understanding the challenges Grosse Pointe Park fans in this area as well as ways we may be able to assist in overcoming them,” Hollier said in a letter to Grosse Pointe Park officials.

In November 2013, five Grosse Pointe Park cops were suspended and required to attend sensitivity training after they captured and circulated humiliation videos of a Black man with disabilities.

The community organization WE GP is organizing Sunday’s rally, which is scheduled for 2 p.m. The exact location has not yet been disclosed.

“On Feb 16th the Dinges family, African American GP Park residents, discovered their neighbor was flying a KKK flag pointed at their side window,” WE GP posted on Facebook. “While the symbol of white supremacist terrorism has been removed, we are gathering to show support for the Dinges family and to make it clear hate has NO Home in GP.”