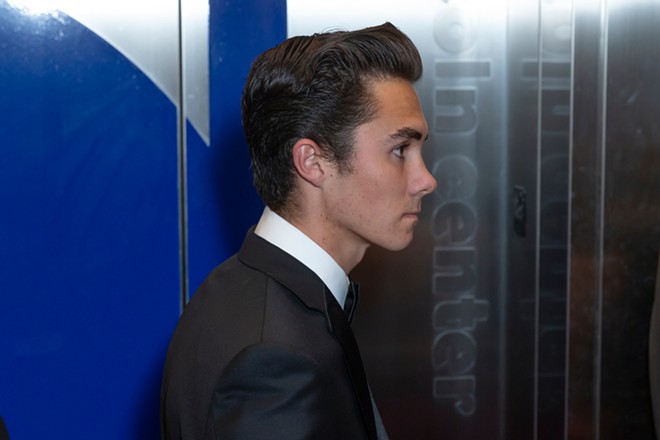 We live in strange times. Following last month's Parkland, Fla., high school massacre, the teenaged survivors have since launched a stunning and unprecedented movement calling on politicians to take a serious look at gun control legislation — and have been by and large met by ridicule from adults on the far right ever since.

An example: On Wednesday, Fox News' Laura Ingraham (an adult woman and Christian) took to Twitter to apparently mock Parkland survivor and movement leader David Hogg (a child whose friends were recently murdered in cold blood) for getting rejected by four colleges to which he had applied.

David Hogg Rejected By Four Colleges To Which He Applied and whines about it. (Dinged by UCLA with a 4.1 GPA...totally predictable given acceptance rates.) https://t.co/wflA4hWHXY


Because the Parkland teens are not here to fuck around, Hogg swiftly tweeted a list of 12 advertisers of Ingraham’s show, The Ingraham Angle — including Rocket Mortgage, a product of Dan Gilbert's Detroit-headquartered Quicken Loans — calling on his nearly 650,000 followers to demand the companies pull their support from the program.

Pick a number 1-12 contact the company next to that #


Since Wednesday, Nutrish, TripAdvisor, Expedia, Wayfair, Nestlé, and Hulu all pulled advertising from Igraham's show. Quicken Loans did not immediately respond to an inquiry as to whether it plans to follow suit.

According to a Media Matters, Rocket Mortgage advertised twice on The Ingraham Angle between March 19 and March 28. Other companies like Pfizer and Liberty Mutual had advertised on the show seven times in the same span.

On Thursday, Ingraham offered an apology, though she did not mention anything about her show's hemorrhaging revenue.

Any student should be proud of a 4.2 GPA —incl. @DavidHogg111. On reflection, in the spirit of Holy Week, I apologize for any upset or hurt my tweet caused him or any of the brave victims of Parkland. For the record, I believe my show was the first to feature David...(1/2)

... immediately after that horrific shooting and even noted how "poised" he was given the tragedy. As always, he’s welcome to return to the show anytime for a productive discussion. WATCH: https://t.co/5wcd00wWpd (2/2)

Again, Hogg called her out, telling The New York Times, "She only apologized after we went after her advertisers. It kind of speaks for itself."