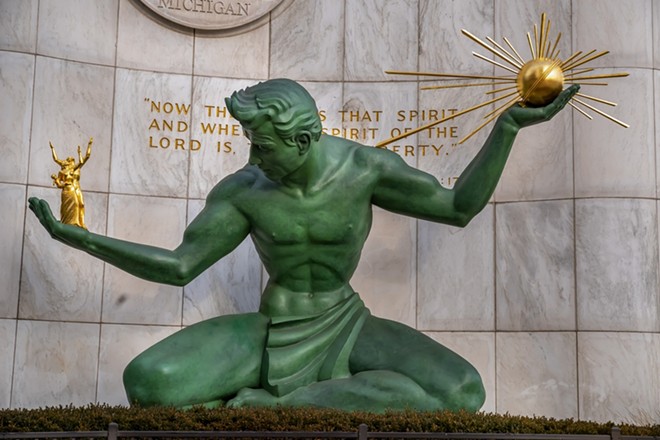 Shutterstock
"The Spirit of Detroit" statue in downtown Detroit.

Nicole Geissinger couldn’t wait to move into her new home in Detroit and start her medical career with a fellowship at Detroit Medical Center.

But the excitement quickly turned to anxiety when the 32-year-old physician received a $5,200 water bill from the city.

Confused, she called the Detroit Water and Sewerage Department and asked if the bill was a mistake.

DWSD said she inherited the previous homeowner’s unpaid water bill and would be charged a late fee of more than $250 a month if she didn’t pay it.

Racked with student debt, Geissinger couldn’t pay the bill without wiping out all of her savings.

“I just moved in," Geissinger tells Metro Times. “How can I be culpable for it?”

Under state law, new homeowners are responsible for the previous owner’s delinquent water bills, according to DWSD spokesman Bryan Peckinpaugh.

“This is a dispute between the buyer and the previous owner,” Peckinpaugh tells Metro Times.

But the story doesn’t end there.

The previous owner paid what she was billed, according to invoices and financial transactions reviewed by Metro Times.

Turns out, the previous owner’s water meter wasn’t relaying usage to the city, so the bill was a flat service fee.

When Geissinger moved into the house, a DWSD employee came to her home and checked the meter to determine how much water the former owner used.

“Once a real estate closing read was requested, we were able to get access to the meter thanks to the new owner and produce an updated bill reflecting the volume usage at the property based on the meter reading,” Peckinpaugh says. “While the meter is DWSD property, it was up to the previous homeowner/occupant to give us access to inspect the meter and update the billing.”

Peckinpaugh says DWSD tried to alert the previous owner about the meter readings.

“We reached out to the original owner on several occasions about a meter inspection and updating the account,” he says. "We had a very specific notice on the front of the bill.”

The notice read, “The water usage history graph is not available for your account due to no water meter or no water consumption in the last 13 months.”

The previous owner never contacted DWSD, according to the city.

Whatever the case, Geissinger says it’s unfair that she’s being forced to pay for water she didn’t use. There was no way for her to know she was buying a house that came with a $5,200 water bill.

Normally, an unpaid water balance is reflected on the home’s title so that a prospective buyer knows there is a delinquency. But in this case, when the real estate agent checked the title, there was no balance because DWSD didn't know what it was.

“I am early, early in my career. I’m a new homeowner,” Geissinger says. “But I’m not in a position where I can’t pay the bill. There will be a lot of late fees, and it will hurt by credit rating. I’m stuck with a more than $5,000 water bill.”

For a city hemorrhaging its population, this is a strange way to welcome a new resident.