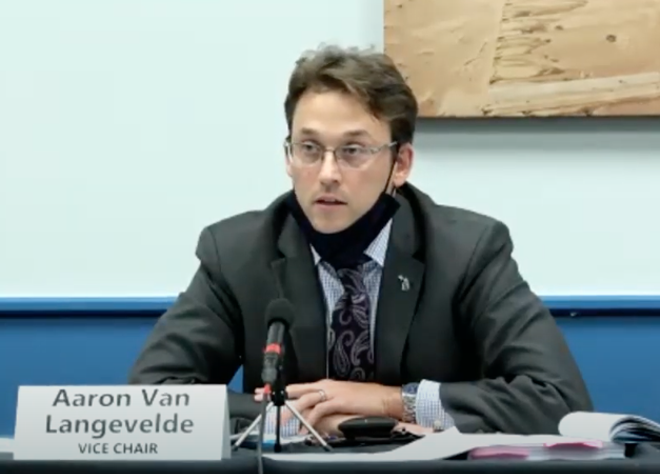 The Michigan Republican Party is throwing Aaron Van Langevelde to the curb after he voted to certify Joe Biden’s win in November.

One of two Republicans on the Michigan Board of State Canvassers, Van Langevelde was hailed as a lone voice of reason after he resisted pressure from inside his party to delay certification. He joined the board’s two Democrats in voting in favor of Biden’s victory. The other Republican, Norman Shinkle, abstained.

Now the Michigan Republican Party plans to replace him with another conservative activist when his four-year term expires on Jan. 31. The party nominated three other Republicans, including Linda Lee Tarver, a political activist who joined a failed lawsuit that falsely alleged widespread election fraud. The other nominees are Tony Daunt, director of the conservative Michigan Freedom Fund, and Tori Sachs, executive director of Michigan Rising Action.

Gov. Gretchen Whitmer will choose from among the nominees.

Van Langevelde told The Detroit News that party members never approached him about serving another term.

“My conscience is clear, and I am confident that my decision is on the right side of the law and history,” Van Langevelde said in a statement Monday. “Time will tell that those who spread misinformation and tried to overturn the election were wrong, and they should be held responsible for the chaos and confusion they have caused.”

“We have a duty to certify this election based on these returns,” he said. “That is very clear.”

Leaders of the Michigan Republican Party have repeatedly peddled false claims about election fraud in a shameless attempt to overturn Biden’s victory.