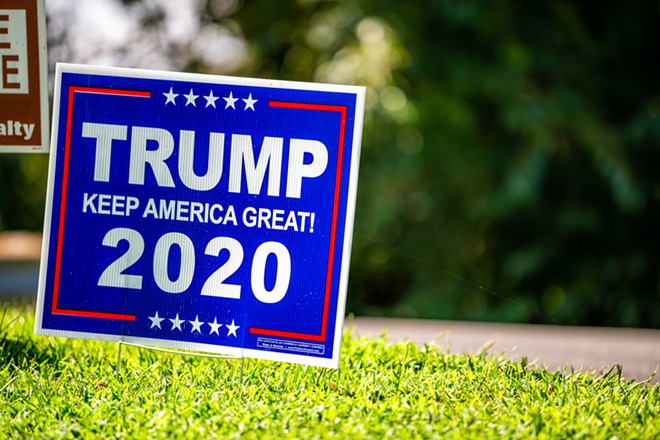 While racial gaps in COVID-19 vaccinations have narrowed in Michigan and nationwide, the partisan divide between who is and is not receiving vaccines remains wide.

And because COVID-19 vaccines are proven to cut down on an individual’s chances of getting seriously ill or dying from the virus — a Centers for Disease Control and Prevention study last month showed you’re 11 more times likely to die of COVID if you’re unvaccianted — a partisan chasm in terms of cases and deaths also exists.

Charles Gaba, a Bloomfield Township-based health care analyst who has been tracking national health care market developments since the Affordable Care Act’s (ACA) rollout during the former Obama administration, is tracking these state and national COVID-19 trends. He’s mapped out COVID-19 cases, deaths and vaccination rates in Michigan vs. the percentage of a county’s vote for former President Donald Trump in 2020.

Though the Michigan-specific trends aren’t as dramatic as his national findings — largely because of Wayne County — the data still points to a definite trend that suggests more Trump voters are getting sick and dying from COVID-19.

“It didn’t get this way overnight. It’s been inching up over time. I suspect it’s probably going to keep getting more dramatic,” Gaba said.

Gaba is a web developer and Democratic Party volunteer who began breaking down ACA enrollment numbers after Healthcare.gov’s rocky 2013 online rollout. From there, he became nationally known for his data-driven health care reporting.

COVID-19 had previously followed a much different partisan pattern before vaccinations became readily available, with many blue regions (heavily Democratic, mostly urban areas) experiencing a higher virus toll than others.

That includes Detroit, the area hardest hit by COVID in Michigan during the early months of the pandemic in the winter and spring of 2020.

But with the introduction of several different COVID-19 vaccines starting in December 2020, those trends have (mostly) shifted. This also holds true for Michigan.

Gaba said late June is when the Delta variant of COVID-19 started becoming more of a serious issue in the United States.

Similarly, but not as stark, Michigan’s highest Trump-voting areas have roughly 8.46 more COVID-19 deaths per 100,000 residents than the bluest counties.

Jen Kates, senior vice president and director of global health & HIV policy at the San Francisco-based Kaiser Family Foundation (KFF), has been documenting the partisan gap in COVID-19 vaccination rates and monitoring public opinion of the vaccines month by month.

One of the main factors driving that gap, Kates said, is the politicization of COVID-19 since the early days of the pandemic.

“Unfortunately, that politicization has carried through to how different people, different demographics have responded to vaccines,” Kates said.

Partisan divides also exist around health measures like social distancing and masks, but the gap in vaccinations is “really striking,” she noted.

“We have something that is scientifically highly effective, and yet there’s still this partisan gap in terms of willingness and acceptance. It’s largely a reflection of the politicization of the pandemic that we’re still living with now,” Kates said.

At this point in the pandemic, party affiliation is driving attitudes towards vaccination more than anything else, a Sept. 28 report from KFF said.

“The largest remaining gap in vaccination rates is by partisanship, with 90% of Democrats saying they have gotten at least one dose compared to 68% of independents and 58% of Republicans,” KFF wrote.

Gaba reported in September that in counties across the country where Trump received at least 70% of the vote in 2020, the virus has killed about 47 out of every 100,000 people since June 30.

That gap is likely to keep growing, at least for now, according to Gaba.

“I suspect it’s probably going to keep getting more dramatic, more of a skew or increase in this direction for maybe another month or so. After that, I have no idea. It might keep going that way or it might reverse,” Gaba said.

Kates explained the partisan gap could eventually close with an increase in vaccine mandates.

“As more places move to [vaccine] mandates, that may serve to reduce the gap somewhat. And over time, hopefully more and more people from different demographic profiles … will be more comfortable with vaccination as a life saving intervention,” Kates said.

“But it’s definitely something over time that we’ve tracked and it has persisted along that line,” she continued.

In analyzing Michigan counties, Gaba found that the highest Trump vote was in Missaukee County (75.9%) in northern Michigan, where about 43.6% of the population eligible for the vaccine is vaccinated.

The lowest Trump vote of 26% was in Washtenaw County, home to Ann Arbor and the University of Michigan, where 64.6% of the eligible population is vaccinated.

Hillsdale County, which voted 73.2% for Trump and is best known as the home of conservative Hillsdale College, has the lowest vaccination rate at 34.5%.

Wayne is Michigan’s most populous county. In 2020, President Joe Biden won about 68% of its vote while Trump received about 31%.

“[Wayne County] breaks the trend, the whole red-blue thing, because obviously Detroit is very heavily Democratic. … That is not a [vaccine] refusal due to partisanship,” Gaba said, but likely a result of other societal issues and variables.

Those include lingering racial disparities in the city that is 79% Black. While Blacks are twice as likely to die from COVID-19 than white Americans, according to the Centers for Disease Control, that has not translated to high vaccination rates in Detroit.

A recent University of Michigan study on vaccine hesitancy in Detroit found that “safety concerns” about the COVID-19 vaccine was the most common reason for residents to not get vaccinated, followed closely by potential side effects. Unvaccinated Detroiters surveyed also expressed far less trust in the government’s ability to ensure the safety of the vaccine than those already vaccinated, as well as a general distrust of the news media.

Gaba also plotted out a “nonpartisan” graph for Michigan that only compares the state’s COVID-19 death rate since June 30 versus the vaccination rate, without accounting for whom the counties voted. Even with politics completely removed, the trend is still clear that the less a population is vaccinated against COVID-19, the more deaths will occur from the virus.

For each analysis, Gaba took the population according to the 2020 census and the percent of the popular vote that Trump received in that county out of all other votes (Trump vs. non-Trump, not just Trump vs. Biden).

He then plotted those numbers against the vaccination rates, case rates and death rates in population chunks by 20% to proportionately illustrate the trend.

Such a stark partisan divide exists in the first place, Gaba said, because “the Republican Party seems to have decided to actively go and oppose itself to science and to empirical data.

“It’s not just about being less likely to be vaccinated. It’s also about fighting against masking and mask mandates and other mitigation measures which go along with vaccinations,” he continued.

Interestingly, Gaba said, the least correlation between vaccination rates and politics was found in the deep South — “where basically, it was low across the board.”

He believes this is due to, one, the deeply red politics of much of the South, and the high African American population’s historical distrust of the country’s medical system. There are also factors at play including state and local policies that discourage vaccines, as well as lack of availability of transportation and other accessibility issues.

Originally published on October 20, 2021 on Michigan Advance. It is shared here with permission.