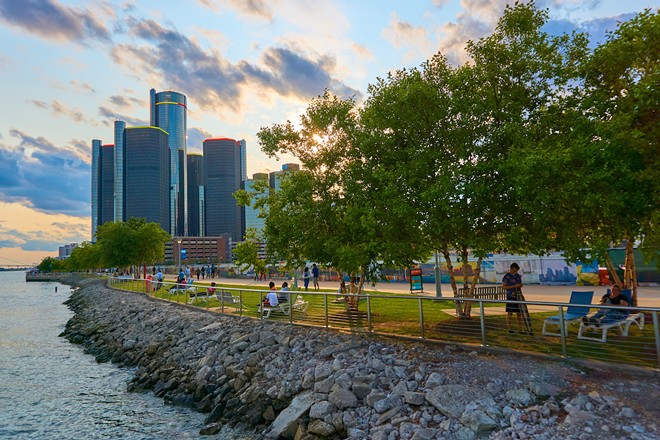 The big picture is getting bigger for one massive Detroit project named after a legendary Detroit boxer which aims to safely — and green-ly — connect Detroit and its surrounding communities.

Congresswoman Brenda Lawrence announced Friday that the Joe Louis Greenway is the recipient of nearly $4 million in federal funding thanks to the INVEST In America Act, which distributes aid to modernize America's rapidly crumbling infrastructure.

“We’re going to create an area where people can ride their bikes and walk. That’s a progressive city,” Lawrence said at a press conference in Hamtramck. “That’s a city that embraced that we need to invest in climate-resilient infrastructure.”

Thrilled to be joined by Hamtramck & Detroit leaders today to announce nearly $4 million for the Joe Louis Greenway that I secured in the #INVESTInAmerica Act. The greenway will connect neighborhoods, businesses & families while creating jobs & opportunities for all Michiganders. pic.twitter.com/igSO1BGmdX

The 27.5-mile-long greenway (meaning, non-motorized and, well, green) broke ground in May, though the concept has been on the table since 2007, when Friends of the Inner Circle Greenway began working with the city to establish loops, routes, and land acquisitions.

The project would connect the Detroit Riverfront, Highland Park, Dearborn, and Hamtramck, and will include the Dequindre Cut's two paved miles, as well as portions of the Detroit RiverWalk. The Joe Louis Greenway will also eventually connect the planned Iron Belle Trail (which is expected to connect Detroit to Northern Michigan) and Corktown's Southwest Greenway both of which have not yet begun construction. 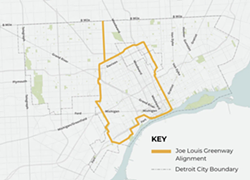 In addition to connecting communities, increasing traffic to local businesses, the Joe Louis Greenway will also provide various community spaces that will host outdoor activities for Detroiters of all abilities.

It is estimated that the Joe Louis Greenway will cost upwards of $200 million dollars and 10 years to complete. However, the first phase, which spans the three miles between Warren and Fullerton Avenues, is expected to be completed sometime in 2022.