Karl Jilg/Swedish Road Administration
The other day, we were kvetching about the way the Detroit News published the debunked "fact" that Detroit is 1/3 vacant land. We said, "Sure it is, if you count such things as parks and cemeteries as 'vacant land.' If you don't, it's more like 1/6 vacant land."

That posting prompted a Detroit researcher to email us and remind us that, according to the latest research, Detroit does have more than 40 miles of vacant land — if you count roadway as vacant land.

Almost 1/3 of Detroit is taken up by land that you can't tax, you can't build on, nobody can live in, and costs government every year to maintain. Almost all of it is exclusively designed for the use of cars and trucks.

Of course, chances are that this isn't really off the charts for your garden-variety Midwestern big city. Even so, people are beginning to question how much of a city should really be given over to the private automobile.

For instance, a new campaign by the Swedish Road Administration features an illustration that has been making the rounds on social networking lately. The work of the Swedish artist Karl Jilg, it depicts roadways as chasms, and crosswalks as gangplanks. Tell us if you've seen a starker image showing just how little space is really furnished for the average pedestrian.

There are already murmurs in Detroit that perhaps we have too much roadway. The announcement that I-375 is to go from limited-access highway to something more like a boulevard may be the first concrete effort to rein in the excesses of the freeway boom. But plans need to so more than shrink roads and provide "green space." They need to free up area for development, for pedestrians, and for cyclists. 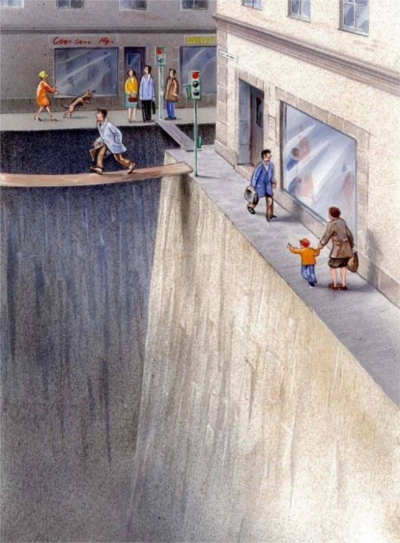