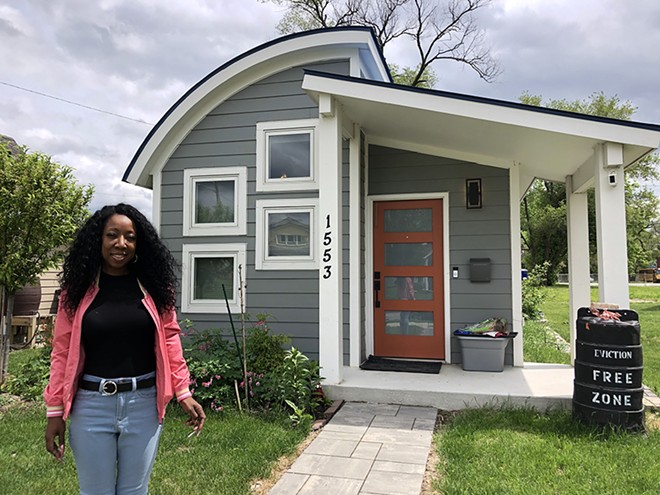 Steve Neavling
Taura Brown was on track to own a tiny home on Detroit's west side as part of an innovative project to fight poverty — but now she's embroiled in a bitter dispute with Cass Community Social Services, the nonprofit that runs the program.

Taura Brown had big dreams for her tiny home in Detroit.

In January 2020, after living on a friend’s couch because she couldn’t afford rent, Brown was approved to move into a new 317-square-foot home that was part of a community of unique tiny houses in the Dexter-Linwood neighborhood on the city’s west side.

Thousands of dollars in debt and battling stage-five kidney disease, Brown made the best of her opportunity, paid rent on time, and attended Henry Ford College. Her credit score increased from 545 to 741, and she quickly paid off her student debt.

She was on her way to owning the tiny home.

Or so she thought.

“This is the house I told my son he was eventually going to move in,” Brown tells Metro Times. “I wanted to keep it in my family forever. This is about generational wealth. This is what the house was supposed to be for.”

Built by Cass Community Social Services (CCSS), an anti-poverty nonprofit, the community of 19 tiny homes – ranging from 250 to 400 square feet – is designed for lower-income Detroiters and youth aging out of foster care. The goal is to provide permanent homes to people whose families never built generational wealth. The project made national news in 2019 as an innovative way to fight chronic poverty.

When the houses were built, CCSS promised that tenants who pay rent for seven years will receive the deed to their home, mortgage-free. The goal was to break the cycle of poverty and create a path to homeownership.

But Brown won’t have that opportunity. At the end of her 12-month lease, CCSS informed the 43-year-old that her lease won’t be renewed.

Citing the nonprofit’s promise of future homeownership, Brown refused to leave and was served eviction papers and a defamation lawsuit.

“I’m not going anywhere,” Brown says. “My rent has never been late. My house is in order. I do everything I’m supposed to do. I want my house.”

Brown alleges she was evicted in retaliation for blowing the whistle on problems at CCSS, claims that the nonprofit emphatically denies. She accused the nonprofit and its director, Rev. Faith Fowler, of fraud and micromanaging residents. She alleged CCSS never intended to provide permanent homes for tenants.

Saying CCSS has ignored high crime rates in the neighborhood – one of her neighbors was murdered in his tiny home – Brown has encouraged other tenants to speak up.

She took her complaints to suburban churches, Fowler’s bishop, the city of Detroit, and the attorney general.

“There is so much shady shit going on,” Brown says. “If you tell people they can have the house after seven years and renege, that’s a scam. You told the public and donors we were going to be homeowners.”

CCSS fired back and filed a defamation lawsuit against Brown, accusing her of maliciously spreading lies about the nonprofit.

The Detroit Eviction Defense, a group that defends people at risk of losing their homes, has come to Brown’s aid and said the eviction and lawsuit smack of retaliation.

“This is racist silencing in the extreme,” Bob Day, a retired lawyer with Detroit Eviction Defense, tells Metro Times. “We’ve seen this before, but only from maniac developers.”

On Sunday afternoon, dozens of supporters gathered near Brown’s house for a barbecue and to celebrate her recent graduation from Henry Ford College. It was supposed to be a joyous occasion, but conversations often steered toward Brown’s eviction.

“This was supposed to be a program for homeownership for people facing homelessness,” Day said. “That’s the promise. When she started to ask about it, that’s when they started to evict.”

In an interview with Metro Times, Fowler denies wrongdoing. She says she respects Brown’s right to free speech and only moved to evict her because Brown is on the lease of another apartment on Detroit’s riverfront, where she spends most of her time.

Fowler says the tiny homes are intended to be primary residences. By allowing Brown to live in a home where she rarely stays, someone who desperately needs a house can’t move in.

“At the end of the first year, it was pretty clear that Ms. Brown wasn’t at the house very much,” Fowler says.

Brown says she often visits her boyfriend at his riverfront apartment and is only on that lease so she can use the swimming pool. She insists she primarily lives in her tiny home.

CCSS modified the rules of the tiny home community to indicate that the houses must be the tenants’ primary residence.

“It’s the expectation because that’s what people gave money for these houses to do – to house folks and give them an opportunity to own a home,” Fowler says.

Foundations, corporations, and religious organizations donated about $3 million to build the tiny home community for people who most need housing.

Brown’s baseless allegations, Fowler says, have also made residents and nonprofit employees uncomfortable. In April 21, Brown wrote a newsletter for residents that accused a neighbor and CCSS employee of sniffing cocaine and labeled her a “samba” and “picaninny.”

CCSS decided to sue Brown when she began accusing the nonprofit of breaking the law.

“When she started saying ‘charity fraud,’ you can’t do that,” Fowler says. “First off, you don’t have any evidence. We are squeaky clean.”

Fowler takes some of the claims personally. A longtime pastor at the Cass Community United Methodist Church, she has spent many years helping Detroiters secure housing and jobs.

Detroit has the highest poverty rate among big cities and a chronic level of homelessness. The tiny homes are one step toward addressing poverty and racial discrimination in mortgages, Fowler says. Of the 21 residents living in the tiny homes, 20 are Black.

In two years, the first wave of tenants will become homeowners, Fowler says.

“People often move in with nothing, and in seven years their house is going to be worth $70,000,” Fowler says. “It truly is a springboard for a better life.”

Fowler says the Detroit Eviction Defense has never reached out to her and that she was going to agree to mediation to work out the problems with Brown.

“She asked for mediation, and we said ‘yes’ to it, and then she asked for a lot of money, and that didn’t feel right to me,” Fowler says.

What happens next may turn ugly. If the court evicts Brown, she says she’s not leaving, and volunteers with the Detroit Eviction Defense have pledged to create a barricade to prevent eviction.

“We’ve done it quite a bit in the past,” Day says.

“I’m not going to move even if the court evicts me,” Brown says. “It’s a chance I have to take.”

With an eviction on her record, it would be almost impossible to find a new apartment.

That leaves CCSS with a tough decision to make.

“Then what do I do?” Fowler asks. “Let her live there and not let someone else move in?”

The next court hearing is set for June 1.