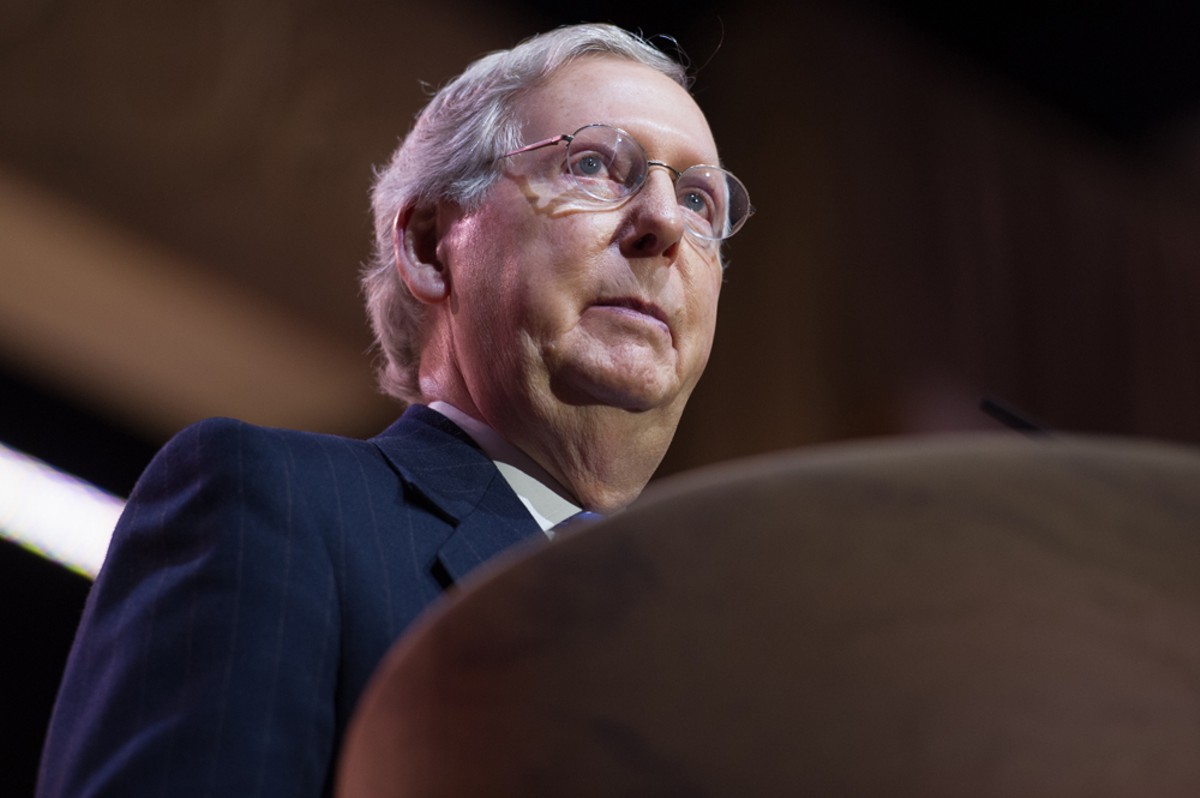 Mitch McConnell never owned a slave, but he’s benefited from slavery and the institutions of White supremacy that followed. So have I. So has every White person in the United States. Christopher Halloran / Shutterstock.com

"I don't think reparations for something that happened 150 years ago for whom none of us currently living are responsible is a good idea," Senate Majority Leader Mitch McConnell told reporters last week, as House Democrats prepared the first-ever hearing on the subject. (Detroit Rep. Rashida Tlaib was a co-sponsor of H.R.40: The Commission to Study and Develop Reparation Proposals for African-Americans Act.) "We've tried to deal with our original sin of slavery by fighting a civil war, by passing landmark civil rights legislation. We elected an African American president," McConnell said.

Ignore how much work the word we is doing in that sentence — as if McConnell hadn't spent his career fighting civil rights and literally breaking the Senate to weaken Barack Obama. Ignore, too, at least for now, the question of how reparations would work.

Instead, focus on the most important phrase in the quote, the one conservatives have been using to shift blame away from institutions to individuals who have long since been worm food: "for whom none of us currently living are responsible."

It would take more space than I have to demonstrate all the ways in which this statement is profoundly ahistorical and intentionally misleading. But let's start with the basics: Freed slaves were promised 40 acres and a mule; they didn't get it. During Reconstruction, they were promised political power; white supremacists stole that, then violently subjugated them under under Jim Crow. African Americans were denied access to jobs and economic and educational opportunities; Black children were segregated into dilapidated schools. During the New Deal and in the postwar era, the federal government actively prevented African Americans from obtaining mortgages, effectively blocking them from building equity and passing along generational wealth to their descendants.

Meanwhile, local and federal housing policy forced African Americans into neglected housing projects that quickly became slums overrun by poverty and violence. Black neighborhoods were bulldozed in the name of "urban renewal" projects, their residents forced into those slums. From their comfy picket-fence suburbs, white folks shook their heads in patriarchal disappointment. But then those white folks' kids decided they wanted to move back into the cities, and these once-undesirable slums became hip, "up-and-coming" neighborhoods, where houses were bought on the cheap, gutted and flipped — and the Black people who lived there for generations could no longer afford to do so.

History didn't stop with the Emancipation Proclamation, or Appomattox, or Juneteenth, or Reconstruction, or Brown v. Board of Education, or the Civil Rights Act, or the appointment of Thurgood Marshall, or the Voting Rights Act, or the election of Barack Obama.

Here's the thing about what Mitch McConnell called "our original sin": To think biblically, I didn't bite the apple, but Eve's sin corrupted me all the same. McConnell never owned a slave, but he's benefited from slavery and the institutions of white supremacy that followed. So have I. So has every white person in the United States — rich or poor, educated or not — and we've done so at the expense of our Black neighbors.

There's a human instinct to chalk up our accomplishments to our own intellect or effort rather than our circumstance, but that's not how it really works. A Black American child born into the bottom fifth of household incomes has only a 2.5 percent chance of rising to the top fifth of incomes. A white child born into the same circumstance has a 10.6 percent chance of making that climb. And Black kids born into the top quintile are almost as likely to fall to the bottom as to stay at the top, while white children are five times more likely to stay wealthy than to sink.

McConnell never owned a slave, but he’s benefited from slavery and the institutions of white supremacy that followed.

"Because of these differences in economic mobility, Blacks ... are 'stuck in place' across generations," according to a recent report from The Equality of Opportunity Project. "Their positions in the income distribution are unlikely to change over time without efforts to increase their rates of upward mobility."

Here's what "stuck in place" looks like: white households are worth about 20 times more than Black households, and that statistic hasn't meaningfully changed in 50 years, as Ta-Nehisi Coates pointed out in The Atlantic. Unless you believe that African Americans are inherently lazier or less intelligent than whites — which, by definition, makes you a white supremacist — that points to institutions rather than individuals as the root issue, which means that our original sin is society's cross to bear.

That brings us to reparations.

In 2015, a policy analyst estimated in Social Science Quarterly that the price tag for the stolen labor of enslaved persons could top $14 trillion — about four times what the federal government expects to raise in tax revenue this year. That's a lot of money. And the logistics could get messy: Should reparations be in cash or social programs? Should they be limited to descendants of enslaved persons or all African Americans?

But these are, at minimum, questions worth exploring. That's what House Democrats (and a few presidential wannabes) want to do — and Republicans want no part of. In their view, slavery is long gone. White supremacy is an anachronism. There's no point in revisiting it, and certainly no point in redistributing funds to compensate those who've suffered from it.

Forget the money. This notion — that structural racism is something that belonged to our great-great grandparents — is fundamentally dangerous. It absolves us of our privilege. It enables us to imagine ourselves as superior — smarter, harder-working, more creative — to those on the lower rungs of the socioeconomic ladder. It deprives us of empathy.

So instead of uniform horror at the sight of thousands of migrant children being stuffed into overcrowded for-profit detention facilities, forced to sleep on cold concrete floors and forgo toothbrushes and towels, we're instead having a debate over the propriety of using the technically-accurate-but-somewhat-uncomfortable term "concentration camp."

White supremacy has never left. And until we fully reckon with it, it never will.

Editor’s note: Why we’re capitalizing ‘Black’ from now on