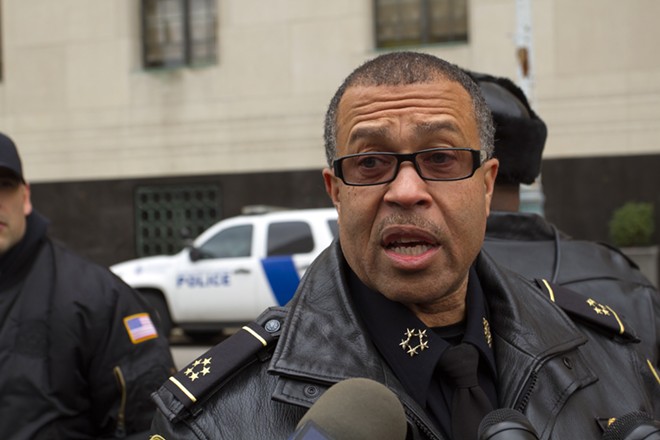 Law enforcement officials are slamming Republican gubernatorial candidate James Craig for masquerading as a cop for years without bothering to become a certified police officer.

When Craig served as police chief in Detroit from 2013 to June of this year, he often wore a police uniform and badge, even though he was not licensed to make arrests or even issue tickets as required through the Michigan Commission on Law Enforcement Standards, or MCOLES.

Craig was still allowed to serve as police chief, but he didn’t have authority to perform the basic duties of a law enforcement officer. In 2013, he pledged to get certified but never followed through.

Michael Brown, a Michigan State Police captain who is also running for governor as a Republican, said Craig should not have donned a police uniform or badge without being certified.

“Jim Craig has let down all of law enforcement with his cavalier attitude toward the uniform and the badge,” Brown said in a statement. "When we put on the uniform and badge we not only swear an oath to protect and defend but we follow rules and procedures – foremost among those is being certified through the Michigan Commission on Law Enforcement Standards (MCOLES). The 20,000 police officers in Michigan understand how this fraudulent representation reflects on the profession. Walking around in uniform like it’s Halloween is not going to cut it with the citizens of Michigan and real crime fighters.”

“James Craig needs to explain to the same communities he swore to protect and serve why he didn’t think it was necessary to keep his word to be certified for the past decade,” Allen said in a statement. "Craig is well aware that failing to clear this basic bar is a bad look. … That he didn’t find the time to get it done from then to this year’s retirement isn’t just some small oversight, it’s gross negligence.”

In a statement to Michigan Radio, Craig's campaign didn’t explain why he failed to get licensed.

Marquette County Sheriff Greg Zyburt, a MCOLES board member, said Craig is going to have a tough time making the case that he can lead the state if he can’t follow through on a basic certification, which involves written and physical tests.

“Across Michigan’s 83 counties, tens of thousands of officers are required to complete this licensing requirement James Craig apparently thought he was too good for,” Zyburt said in a statement. “It will be even tougher now for Craig to claim he’s ‘led from the front’ when he couldn’t show respect for a process everyone else must go through before they get to wield a gun and badge. Too 'time-consuming' to meet a basic requirement of a law enforcement officer? Imagine how exhausting he’d find the governor’s office.”