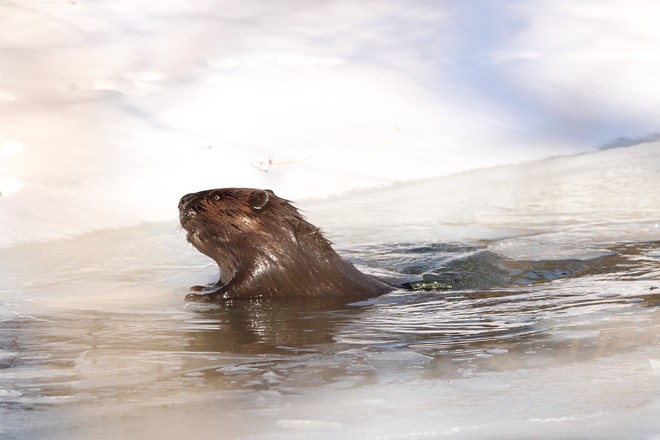 A decade ago, beavers returned to Detroit’s Belle Isle for the first time in a century, causing celebration among environmentalists. But now it seems the rodents have worn out their welcome on Detroit’s island park, or at least with the Michigan Department of Natural Resources, which has run it since 2014. On Thursday, the department announced during a Belle Isle Park Advisory Committee meeting that it had recently trapped and killed some beavers on the island.

Ron Olson, DNR’s chief of parks and recreation, confirms that the department killed four beavers on Belle Isle and the nearby Milliken State Park. Olson tells Metro Times that the DNR isn’t trying to exterminate the aquatic mammals from the parks, but only trying to keep their population in check. Each pair of beavers has around four young, and around this time of year, they start moving out of their dens and establishing their own territories.

The beavers have been causing a nuisance for the DNR since 2017, when they started felling willow trees along the park’s scenic Lake Okonka. At the time, DNR started installing wire fences around the existing willow trees, and discussed possibly relocating the animals.

But Olson says the beaver population on Belle Isle is starting to cause other problems. Aside from eating the willow trees, the beavers are causing some flooding in the park’s wooded areas. At Milliken State Park, a wetland there is used as a naturalized stormwater management facility. In recent years, the Detroit area has seen an influx of flooding due to storms with increasing severity, which Mayor Mike Duggan has said are likely caused by climate change. “We can’t have a beaver dam up that waterway,” Olson says.

“The population is still strong. We did not get rid of all the beavers. There’s still a number of them there,” he says. “It’s a very calculated management strategy.”

When asked why DNR didn’t trap and release the beavers, Olson says it’s because they could just come back.

“There are a lot of beavers along the Detroit River, so there is no fear of a reduced population,” he says. “I know it can create some anxiety on the part of people, but it’s a management strategy that’s used quite often statewide.”

Indeed, the news of the beaver removal made some park-goers upset.

“Let us all have a moment of silence for those no longer busy Belle Isle beavers,” Chris Martin wrote on Facebook. “There must be a more humane way to treat our mammalian cousins.”

Melissa McLeod, a self-taught nature photographer who shares her photos of Motor City wildlife on Instagram as @feral_detroit, says she has been spotting beavers on Belle Isle for the past five years.

“I’m really shocked,” McLeod tells Metro Times. “It was a huge deal because they hadn’t been spotted in like a century.”

McLeod says the beavers have been multiplying along the river, and have also been spotted downriver in Lake Erie Metro Park in Brownstown.

After years of observing the semiaquatic creatures, McLeod says she felt an affinity for them. “I for sure felt a connection,” she says. “And also, I mean, they’re a keystone species. They play a way more important role in the environment than willow trees, not that the willow trees don’t matter. But I’m thinking it’s more of an issue of cosmetics.”

McLeod says she has seen the fallen willow trees regrow. “I could take you and show you that if they’re cut a certain way, the tree doesn’t die,” she says. “You can see the stump and then shoots start growing out of it. So those trees may not even be dead.”

She adds, “Beavers have been doing this since the beginning of time … they’re doing what they do. It was celebrated 10 years ago, and now all of a sudden, it’s an issue?”

Olson says it’s not quite so simple. “It’s not so much as cosmetic,” he says. “When they feed, they’re taking out trees that are also part of the area that people use for shade. The landscapes, the wooded area, are very naturalized. That’s part of the ecosystem, and we don't mind that. But the problem is when the population gets too big, and then they migrate out and start destroying the other trees, then you have to kind of figure out what is the proper balance.”

DNR has reported an increase in attendance since it took over the park in 2014, under an emergency management agreement reached by former Governor Rick Snyder and former emergency manager Kevyn Orr. Since DNR took over, tens of millions of dollars of investments have been made to the park.

“I think it’s kind of a competition between, you know, who gets to shape Belle Isle more, us or them?” McLeod wonders. “And of course, it’s going to be us.”